Listening to the Jar Flies

Growing Up in Wheaton and Rocky Comfort 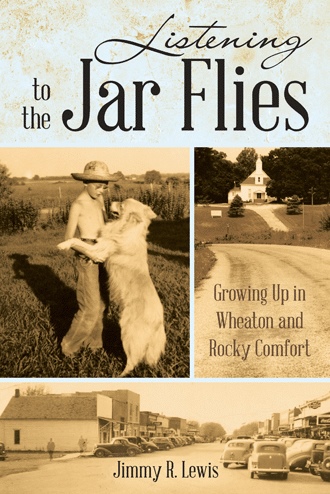 From time to time—and exactly when is never predictable—the memories of our childhood open the doors of our consciousness without knocking. Sometimes they barge in wearing heavy work shoes, yelling for attention: A sudden vision of "Uncle" Newt Kelly—long since gone on to his eternal reward—spitting tobacco juice to the side of the wagon, snapping the reins and cursing in machine-gun bursts to encourage more effort out of a pair of small mules as they strain to pull a great load of gravel out of Indian Creek and haul it up the road where they're mixing cement for the foundation of a new barn—a barn that's now ramshackle and leaning, its wood weathered and its tin roof rusty.

Sometimes those memories just waft in through an open window in our mind, insinuating themselves at first like the faint scent of your mother's lilac perfume until their sweetness overwhelms all other thought: Sitting on your grandad and grandma's back porch in the twilight of a warm summer day, watching your grandad fit his high-top leather work shoe over an iron shoe last so he can pound down a tack that had poked through the sole... drinking in the smell of the honeysuckle growing on the garden fence out by the locust tree where jar flies pierce the heavy evening air with sounds like a grindstone on metal.

The bad memories—the ones that still wound us to the core of our souls—often gather slowly like the white puffy cumulus clouds that are so pretty in the morning, but which pile together in the afternoon until they take the shape of an anvil that God pounds with his hammer, sending lightning and hail and wind and rain: My cousin Bill Slinkard killed on a road deep in the hill country of northern Arkansas when a waterlogged tree fell on his milk truck... Bill Haynes, when he was a Wheaton High junior, shaking with great sobs while leaning on the casket of Thelma Smith, the high school English teacher.

But the mental storms, like the thunderstorms that strike the Ozarks with unpredictable irregularity, soon blow over, replaced by blue skies of remembered humor: "Uncle" John Robinson, our neighbor, who at my dad's deadpan suggestion, employing a unique method of taking the squeal out of his radio... Palo Stewart, deep in the hills, cooling his food in a way that wouldn't have earned the Good Housekeeping Seal of Approval... Brock Cantrell, handling his brother Arch’s departure from this walk of life the old fashioned way.

Some memories are neither fair nor foul, but vivid nevertheless. Like the metallic, grinding song of the jar flies, they can’t be ignored: Wheaton on a Saturday afternoon when the town was full of farm families... men in bib overalls and women in print dresses made from feed sacks... the screaming and shouting of the crowd when the Rocky Comfort Greyhounds played the Wheaton Bulldogs in a basketball game... Wheaton barber Bryan Wolfenbarger chain-smoking cigarettes while he cut your hair... Luther Cartwright, blue chambray shirt and bib overalls crisp and pressed, with one leg of his overalls neatly folded and pinned behind the stump of his amputated leg, moving down Wheaton's Main Street sidewalk faster than most people could walk... Delmont "Democrat" Carter, in his striped overalls and engineer's cap, sauntering out to his gravity-fed gas pumps as he rolled a cigarette with one hand and whisked a match across the bib of his overalls to light up, as he pumped gas into Grandad's '36 Chevy with his other hand.

Those are but a few of the memories that have invaded my thoughts with increasing frequency as I have lurched from late middle age into early old age. One day it occurred to me that it would be a shame, in a culture bombarded with homogenized, electronically-delivered sights and sounds and factoids of dubious worth, to let a period of such rich experiences slip into the dark void of unrecorded history like, as the Apostle James noted, "a vapour, that appeareth for a little time, and then vanisheth away."

I have just two wishes for those of you who read what I have written: That the stories spark your own precious memories, and that they inspire you to pass those memories on to your friends and loved ones, so that a hundred years from now someone will be telling the story about your "uncle" Newt Kelly, savoring your mother's biscuits and gravy and declaring, "That's mighty good doughgod."

In this delightful memoir, Jimmy R. Lewis does for the Ozarks what Garrison Keillor does for Lake Wobegon. Lewis has compiled an appealing and enduring love letter to Midwestern small town life of yesterday. BlueInk Starred Review In his memoir of growing up in rural southwest Missouri, Jimmy R. Lewis uses local newspaper archives and childhood memories to bring a bygone era back to life. Missouri Historical Review Lewis is a talented storyteller. Reading these accounts is like being at a family reunion, hearing lively tales—preferably told outdoors in late summer, with the...jar flies, or cicadas, buzzing in the trees... Clarion Review - Five Stars (out of five) Lewis paints, in alternating broad and fine strokes, a picture of a small segment of the rural United States through difficult and prosperous eras. He has an eye for satisfying detail, and he thoroughly catalogs a colorful cast of characters... Kirkus Reviews Wheaton and Rocky Comfort, Missouri, may have looked like two sleepy towns in the mid-twentieth century, but they were home to an aging former cowboy who bested Old West legend Tom Horn in a knife fight, a faith-healing preacher who sought converts as a four-foot bullsnake slithered around his shoulders, and an air force fighter pilot who narrowly averted firing a missile that could have started World War III. Author Jimmy R. Lewis presents these and many other stories that offer insight into a piece of rural America’s history.

Jimmy R. Lewis earned a journalism degree from the University of Missouri. He worked as a newspaper reporter and as a staffer for the US Senate and the California Legislature. Lewis and his wife, Jan, live in Fair Oaks, California.