An Interpretation Of Another Testament Of Jesus Christ 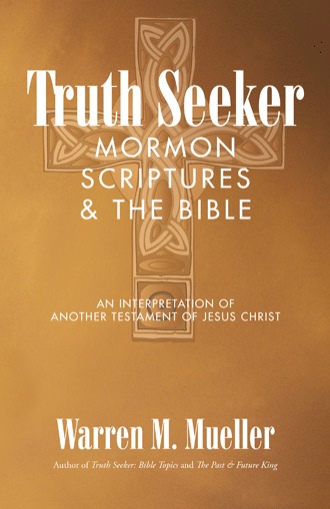 The Book of Mormon is a collection of 15 books, written by ancient prophet/historians, which are named for the principal author. It is an abridged translation of the record of two great civilizations that developed in Americas. The first group, known as the Jaredites, came to the American continent after God confounded the speech of mankind and scattered them following the construction of the Tower of Babel. The second group was Jewish people descended from the prophet Lehi who left Jerusalem around 600 BC. These writings were abridged and translated by a prophet named Mormon and his son Moroni. These abridged translations were inscribed in gold plates that were hidden by Moroni in the hill named Cumorah around 421 AD.
On September 21, 1823, the resurrected Moroni appeared to Joseph Smith and “instructed him relative to the ancient record and its destined translation into the English language.” These plates were later delivered to Joseph Smith who translated them “by the gift and power of God.” Once the plates were translated, Joseph Smith gave them back to Moroni so they were never seen again. Eleven people saw the gold plates and provided written statements attesting to this.
Four different types of plates are mentioned, from which the Book of Mormon was translated:

The Plates of Nephi—Large and small metal plates on which the history of the descendants of the prophet Nephi are recorded.

The Plates of Mormon—Abridged translation from some of the large plates of Nephi by the prophet Mormon including commentaries.

The Plates of Ether—Abridged translation of the history of the Jaredites by the prophet Mormon.

The Plates of Brass—Records brought by the people of Lehi from Jerusalem around 600 BC. These records contain the five books of Moses and the history of the Jews through the reign of King Zedekiah.

The Book of Mormon is purported to be “comparable to the Bible.” Joseph Smith said that it is “the most correct of any book on earth.” It is a record of God’s dealings with the ancient inhabitants of the Americas and it contains “the fullness of the everlasting gospel.” The Church of Jesus Christ of Latter-day Saints (LDS) is founded upon this book and its adherents are referred to informally as Mormons. The Mormons believe that their church is “the Lord’s kingdom once again established on the earth preparatory to the second coming of the Messiah.”
In the introduction to The Book of Mormon, all men everywhere are invited to read it and “to ask God, the Eternal Father, in the name of Christ if the book is true.” Truth Seeker: Mormon Scriptures & the Bible summarizes this book as well as the Doctrines and Covenants and The Pearl of Great Price that, in concert with the Bible, constitute the scriptures recognized by Mormons.
The content of these books is reviewed for internal consistency as well as consistency with accepted historical records. Finally, the terms and concepts are compared to their historic context and the Bible. The perspectives of Mormon reviewers are included as footnotes under the Author Comment sections. My responses to Mormon reviewer comments in the footnotes are provided as italicized text following the footnotes.
The Doctrine and Covenants is a collection of divine revelations given to Joseph Smith and some of his successors in the Presidency of The Church of Jesus Christ of Latter-day Saints. Therefore, it is considered among the sacred scriptures by LDS members. Unlike The Book of Mormon and the Bible, it is not a translation of ancient documents but it is a recent work for the restoration of the kingdom of God in these latter days. The Doctrines and Covenants covers a wide range of subjects including the struggles to build Zion in America, translations of portions of the Bible and The Book of Mormon, and theological matters such as the nature of God, origin of man, need for repentance, the works of the Holy Spirit, future judgment, life after death and church administration.
The Pearl of Great Price is a collection of selected works of Joseph Smith first compiled in 1851 to make them available to LDS members. There have since been a number of revisions and rearrangements of the contents including moving some works to The Doctrines and Covenants. The present version of The Pearl of Great Price includes the following books:

Author Comments
The introduction begins by stating that The Book of Mormon is comparable to the Bible as they both contain “the fullness of the everlasting gospel.” However, there is also a quote by Joseph Smith stating The Book of Mormon is the “most correct book of any book on earth” and that a man could get closer to God by abiding by its precepts than with any other book. These statements by Joseph Smith appear to say that The Book of Mormon is superior and not comparable to the Bible .
The Urim and Thummim mentioned in the Bible are two objects used in decision making by the high priest. What these objects were is not clear in the Bible but they were inserted into the breastplate of the high priest (Ex 28:30; Lev 8:8). Many scholars believe that the Urim and Thummim were lost when the Babylonians destroyed the first temple in Jerusalem. However, the last mention of the Urim and Thummim in the Bible is by the prophet Ezra who states that the governor ordered that certain priests be removed from the temple service until “a priest ministering with the Urim and Thummim” was found (Ezra 2:62-63). It is unclear whether the Urim and Thummim were in use or whether this was a way to exclude priests of questionable lineage from temple service after the exiles returned from Babylon.
The Book of Mormon says that two stones in silver bows fastened to a breastplate “constituted what is called the Urim and Thummim.” These Urim and Thummim stones were given to Joseph Smith with the sacred plates and were used by him in the translation of the plates. Thus, the Book of Mormon defines the Urim and Thummim as stones set in bows. The Bible says that they were used for decision making while the Book of Mormon says they were used for translating the sacred plates delivered to Joseph Smith.
In order for the true Church of Jesus Christ to once again become “operative as an institution among men” as it was in Old Testament and Apostolic times, Joseph Smith and Oliver Cowdery were ordained into various priesthoods. John the Baptist ordained them into the Aaronic Priesthood then the apostles Peter, James and John ordained them into the Melchizedek Priesthood (D&C 13; 27:12). “Other ordinations followed in which the priesthood keys were conferred on them by Moses, Elijah, Elias and many ancient prophets” (D&C 110; 128:18, 21). Based on these ordinations, the true Church of Jesus Christ was given authority “to teach the gospel and administer the ordinances of salvation” (Pearl of Great Price, JS-History 1:1–75; D&C 20).

Are Mormons Christians? What do they believe? How do their beliefs compare with other Christian religions?

I have been impressed by the dedication of Mormon missionaries, the beauty of the Mormon Tablernacle Choir and the majestic architecture of Mormon temples. I have known several Mormons and they seem to be family oriented people who live out their faith in tangilble ways. As American culture drifts towards situation ethics and values based on surveys, Mormons are like other Christians in that they tend to be conservative and look to their Church and Scriptures for guidance. This interest and curiosity led me to study Mormon scriptures and compare them with the Bible. Each chapter of Truth Seeker: Mormon Scriptures & The Bible is a summary of each of the books that make up The Book Of Mormon, The Pearl of Great Price and Doctrines & Covenants. This is followed by a discussion of internal inconsistencies, differences from the Bible and historical problems. In order to provide a balanced discussion, the views of a devout Mormon, Dr. Jordan Jensen, are included. Brigham Young University and Latter-day Saint (LDS) web sites were used to answer questions I still had after completing my review and to fill in gaps in my understanding of some doctrines and beliefs. The result of these efforts is a book that provides insights into Mormonism and how it compares and deviates from other Christian churches. The essence of the deviations are founded in the idea that Mormonism extends, clarifies and sometimes replaces Biblical teachings based on revelations given to Joseph Smith and subsequent LDS prophets.

Warren M. Mueller manages a group of environmental scientists and engineers for a midwestern utility company, he has two Master of Science Degrees from the University of Wisconsin. He has authored or co-authored papers and presentations in environmental studies. In the past ten years, he has written six Christian fiction and non-fiction books as well as over twenty articles for the New York Times Christianity about.com and Christian Pulse web sites. Truth Seeker: Mormon Scriptures & The Bible is his third published book. His other published books to date are: Truth Seeker Bible Topics and The Past & Future King.