Discovery of the Life-Organizing Principle

In Search of the Fundamental Laws of Life 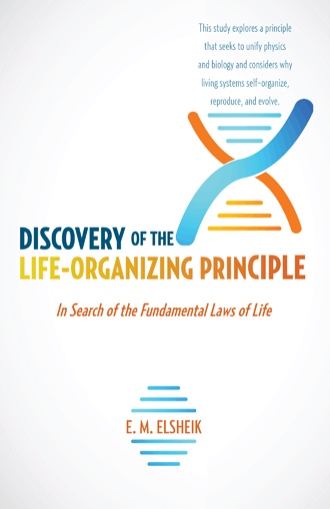 Preview: Discovery of life organizing principle In search for the fundamental laws of life phenomenon Author: E. M. Elsheikh Publisher: iUniverse, USA This book is about the discovery of life organizing principle, about the discovery of the nature and secret of life phenomenon. We accept the main stream biology and main stream physics claim that life is a physical rather than supernatural phenomenon. Then why do living systems self-organize, self-replicate and self-evolve while non-living systems do not? According to the Second Law of thermodynamics a living system should decay and disintegrate, however, this does not occur only when the living system dies, why? The answer is that because the living system is a far from equilibrium thermodynamic open system which exchanges matter-energy with the surroundings, in doing so it sustains its living state without decomposition. The question then how could it be possible for the system to traverse a path of increasing complexity from thermodynamic equilibrium to maintain a state of far from equilibrium thermodynamics? What is the driving force? Is it an intelligent designer?! According to quantum mechanics a living system, being macroscopic localized system, should be decoherent and lack useful energy for its function, on the contrary the living system is coherent and rich in useful energy, so what is the source of its coherence? The dynamics of a physical system is embedded in phase space coordinates from which the system’s equation of motion can be derived, on the contrary the living system dynamics depends on its bio-information or bio-complexity rather than on the space coordinates it occupies. So how could it be possible to discover a life organizing principle which contains the dynamical essence of a living system irrespective of the phase space coordinates? Reductionism claims that life is reducible to ordinary physics based on the doctrine of physical closure according to which every physical effect has a physical cause. And since living systems performance is physical then it must have physical causes. Anti-reductionism in turn claims that life is not reducible to physics, because Nagel’s bridge law requirement cannot be met. Nagel’s bridge law necessitates that reducibility requires a connection between physical terms (e.g. momentum) and biological terms (e.g. heredity). In addition it requires the derivation of the proposed biological laws from physical laws. So how can a life organizing principle transcend this dichotomy or enigma? Moreover, if biological evolution is not a random process but subject to a life organizing principle then it has to have a goal function or target criterion, what is it? To discover the life organizing principle it is necessary to discover what physically distinguishes life from non-life? This means it is necessary to discover a fundamental property of matter which escapes human imagination for centuries, what is this property? To answer all these questions a paradigm shift is needed which includes: - Broadening the concept of information - Identifying life golden ratio based fractal nature - Extension of quantum field theory - Extension of stationary action principle to include a principle of maximum action. The paradigm shift facilitates developing a new quantum information fractal field theory (QIFFT), according to which the secret or essence of life resides in the DNA or genome as a quantum information fractal field which generates, in addition to weak electromagnetic waves, bio-information oscillations. The bio-information oscillations, being the new discovered fundamental property of matter, contain the dynamical essence of living systems. In consequence the life-organizing principle (LOP) is a generalized Schrodinger type of system with vitality, a measure of bio-information, as path variable. The LOP, being nonlinear and non-conservative system, is an attractor; it is a minor attractor when describing cell dynamics and a major attractor when describing multi-cellular organism dynamics. A cell type is an example of minor attractor which belongs to the basin of a major attractor. A maximum action principle which facilitates self-organization, self-replication and self-evolution is derived on the basis of the life organizing principle. Moreover, a First Law and Second Law of self-organization are also derived on the basis of the life-organizing principle. These laws identify a conclusive biological evolution target criterion or goal function which is the increase of total vitality. Total vitality is a product of organism’s total action, genome physical information and lifespan. Thus natural selection selects the path of maximum action. In addition to phylogenesis these laws also describe ontogenetic development, cellular differentiation and organism growth. The First Law of self-organization states that the organism’s rate of change of action is directly proportional to its developmental functional complexity (bio-information). While the Second Law states that the organism’s total vitality is directly proportional to Fibonacci numbers and the genome physical information and inversely with the frequency of bio-information oscillations. The Fibonacci numbers represent the quantum functionally stationary states, they represent minor attractors states ontogenetically, and major attractors states phylogenetically. Based on the Second Law, both phylogeny and ontogeny are processes that generate and assemble minor attractors. These laws admit limiting transition to linear reversible quantum mechanics, which means they are more general than inanimate physics. Hence the question of whether biology is reduced to physics or vice versa becomes meaningless, i.e. the two domains coincide. Finally, the genome’s total bio-information is found to generate two survival components: reproductive fitness component and total vitality fitness component. This extension of Darwinian Theory substantiates a theory of multi-level selection and facilitates a more dynamic conception of human nature.

Everything you wanted to know about physics, biology, and the world at large becomes straightforward once you understand the life-organizing principle. Author E.M. Elsheikh, a mathematician and longtime professor, examines what the principle tells us about nature and life in this academic work. He proves that the secrets of our world reside in the quantum information contained in our DNA and genome.

Discover the inner workings of life, and develop a better understanding of a maximum-action principle that explains self-organization, self-replication, and self-evolution. He also explores such topics as laws that describe phylogenetic evolution and ontogenetic development; little-known facts about genetics and evolution, including why Darwinian theory facilitates a more dynamic conception of human nature; extensions of quantum theory; and new foundations of knowledge.

By challenging the notions of mainstream biology and physics and questioning assumptions about life being a physical rather than a supernatural phenomenon, you’ll stumble upon truths that few others know. Get ready to go on a fascinating journey that challenges paradigms and leads you to the Discovery of the Life-Organizing Principle.

E. M. Elsheikh holds a master’s degree in applied mathematics from the University of Khartoum in Sudan. He was the head of the math department at Altahadi University in Serit, Libya, from 1998 to 2009. Visit him online at www.lifeprinciple.com.