One Teacher's Struggle to Survive in the American Public School System 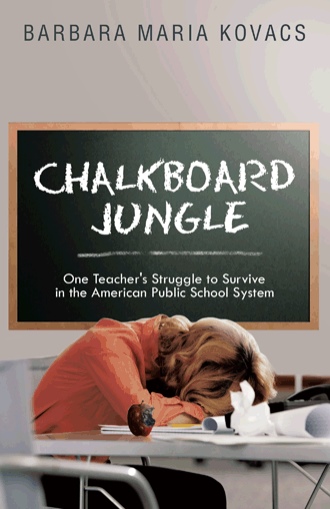 Brenda sat dumbfounded as she absorbed all of the information that was being thrown at her in the departmental meeting. She was finally beginning to understand why so many of the teachers were bitter. Children and teachers alike were caught up in a system that doomed them to failure. The NCLB, which was signed into law in 2002 under the Bush Administration, was created to close the achievement gap, and demanded that all children be proficient in the areas of math and reading by 2014. However, what the law neglected to take into account was the many extenuating circumstances that could contribute to a child’s failure. There could be any number of reasons a child might fail, and not all of these could be pinned directly upon the teacher. The curriculum itself was the number one culprit. Brenda had remembered learning in college that curriculums were designed with the proverbial “mile wide and inch deep” philosophy. This philosophy was evident within Brenda’s own curriculum. It appeared that she was required to teach over eighty different topics within the course of the year. This averaged out to approximately one topic a day, with a few days left open for tests and review. With so much to learn, and so little time to learn it in, how could anyone achieve mastery of the material?

And so this was the challenge that Brenda was in for. Like so many other teachers before her, she was caught up in a system that capitalized on “teaching to the test”. This new millennium brought the NCLB into existence, and with it, a plethora of unrealistic expectations. The concept of a well-rounded curriculum had become an obsolete and outdated idea. Today’s children are inundated with lessons that coincide with the FCAT and woe to the teacher that dares to deviate from it! The current educational system cares nothing for nurturing the love of learning, nor does it strive to encourage creativity. Instead, it is an unstoppable juggernaut that mercilessly grinds both student and teacher to achieve the highest possible test results. It cares not for the struggling or disadvantaged student. It is a cold and heartless machine that relentlessly raises the bar a little higher each year, forever condemning those that get left behind.

As terrifying as all this was, Brenda took comfort in the fact that she was not alone in the struggle. There were teachers all around her that were in exactly the same predicament. After the meeting concluded, the math teachers were divided into three groups, one group for each grade level. Brenda joined the 6th grade teachers, and although she listened to everyone, she paid particularly close attention to what the veteran teachers had to say. There were only a handful that remained, and to hear them speak nearly brought tears into Brenda’s eyes. These teachers had known a time before the NCLB and it had been their great fortune to experience a golden age of teaching. Unlike all of the negativity that she had heard thus far, these teachers had a very different perspective on the teaching profession. They still loved their jobs and held onto the belief that someday things would change back to the way they use to be. However, Brenda was doubtful, and hung her head remorsefully with the realization that she would never know this kind of gratification within her own career.

Brenda Connor dreamed of being a teacher her whole life. Recently graduated from college, she’s thrilled when she gets a job as a public school math instructor. But her joy soon turns to despair when she realizes the job she dreamed of is something of a nightmare.

First, the length of her employment is based on the results of a standardized test known as the FCAT. What’s more, Brenda’s students are disrespectful and uninterested in learning—and in spite of Brenda’s phone calls, their parents don’t care. The administration is determined that students must improve their test scores—no matter the cost. Brenda quickly finds herself under the watchful eye of assistant principal, Mrs. Harrison, who—instead of offering her support—seeks to get rid of Brenda, documenting her performance in the classroom and threatening to place her on a professional disciplinary plan

Brenda’s only friend, Mr. Fisher, is also under evaluation. They are both thwarted at every turn, harassed via weekly interrogations and classroom reviews. Brenda’s dream of being a teacher is vanishing before her eyes, and she must decide: are students worth fighting for, or will she give in to administrative pressure and quit before stress destroys her body and mind?

Barbara Maria Kovacs, currently a librarian, has a bachelor’s degree in math from Arcadia University and a master’s degree in library science from the University of Pittsburgh. Prior to working in the library system, she taught middle school math. She currently lives in South Florida.