What Parkinson’s Teaches about Life and Love 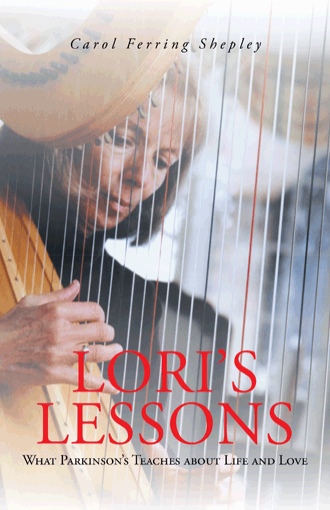 Lori Patin is a beautiful woman with high cheekbones, luminous skin and blonde hair. I expected to see her hand tremble, but it held steady as she walked slowly but gracefully to the car. When we got there, she told me with a little laugh, “I hope you don’t mind sitting in the back seat because I have motion sickness and I will vomit if I don’t sit in the front.” I hastily told her that the back seat looked good to me. I first met Lori and Bob Patin on June 14, 2012 at a train station on Parkinson Street in Normal, Illinois. The hand of destiny seemed to have a grip on these names because Lori has had Parkinson’s Disease for 15 years, since she was 55, and she works very hard to lead a normal life. Parkinson’s is a progressive, still incurable, degenerative disorder that affects the central nervous system. But she challenges the progression in the most inspirational way and bets on a cure, determined to buy time until one is found. Although I did not know it when we set up our meeting, a benevolent fate had brought us together. The Patins and I were meeting to see if we could work together. They wanted to assess whether I could write their story, and I wanted to find out whether their story intrigued me enough to commit a year of my life to it. In the few weeks between the time setting up the meeting and the meeting, my youngest daughter was diagnosed with epilepsy, a neurological disorder that has affected everything about her life and therefore mine. Time and again as our family has confronted the challenges of my daughter’s condition, I have thought about what would Lori do in my daughter’s case and what would Bob do for my own, the caregiver’s, sake. I have been inspired by their good example and feel so blessed that Lori and Bob have entrusted me with telling the story of all that they have learned from her determined encounter against this terrible neurological disease. It has strengthened me in our own encounter with disease. In fact it is a miracle that Lori was even able to meet me in Normal. Three years ago, she couldn’t have made the trip because of her shaking palsy. The summer before last her weight was down to 94 pounds from a normal weight of 110. After falling repeatedly and suffering hallucinations, she was hospitalized and went into a coma. The standard medical wisdom has it that people with Parkinson’s only get worse, but Lori has refused to accept that. Through a combination of tenacity, spirituality, hope, and what seems to some to be magic, she has done something remarkable: She has reversed the disease. On the Hoehn and Yahr Scale, a scale commonly used for measuring the degenerative effects of Parkinson’s, last summer Lori was a 4.5 out of 5, 5 being the worst. Today she is a 2.5. Her mantra has been: “I am absolutely determined that this is not going to get to me. I will not let Parkinson’s control my life. My destiny is still in my own hands.” Her doctor Michael Rezak, a specialist in the field for 35 years and a nationally recognized expert, knows of no one else with Parkinson’s who has come back the way Lori has. Her story is about much more than her struggle against this ugly disease; it is also the story of someone who has faced a terrible challenge, met it head on and refused to concede. And, in the struggle, she has learned valuable lessons about life itself. It is also a love story. Her husband, Bob, stands besides her in the fight, saying: “We both have Parkinson’s.” He takes Tai Chi and ballroom dancing with her. Every morning he brings her breakfast in bed; then washes and blow-dries her hair. Most of all he believes in her and her tenacity and determination. He says, “This disease is a teacher and both Lori and I have surely struggled with some of the lessons, but we have learned the hard ones. The harder they are, the more we learned to team up against the challenge. “ He feels that P.D. is also their whole family’s disease and that the battle has deepened their collective bond. Lori says, “I would not be alive without Bob.” Bob says, “I wouldn’t want to live without her.”

When Lori Patin first received her diagnosis of Parkinson’s at age fifty-five, she wanted to cry until she died. When she made up her mind to fight the disease, her husband and caregiver, Bob, took a stand beside her. In Lori’s Lessons, author Carol Ferring Shepley tells the story of the Patins’ love throughout the course of the disease and how it affected their lives.

But this memoir is about much more than Lori’s struggle against Parkinson’s disease, a progressive, incurable, degenerative disorder that affects the central nervous system. It’s also the story of someone who has faced a terrible challenge, met it head-on, and refused to concede. In the struggle, she has learned vital lessons about life itself.

Lori’s Lessons shares how for fifteen years, Lori fought relentlessly, but in the summer of 2011 she lay in a coma. At the time, Bob thought the best he could hope for was to bring her home with a nurse. Thanks to a miraculous remission, however, today she doesn’t even have tremors.

Offering inspiration and hope, Lori’s Lessons presents a 360-degree perspective on how Lori attacked the disease. She has taken many pharmaceuticals, but the two strongest drugs in her regimen are hope and faith.

Carol Ferring Shepley graduated from Wellesley College, majoring in art history and English literature. She has written for Money, Time, and Harper’s Bazaar and is a former art critic for the St. Louis Post-Dispatch and professor of art history. She is also the author of several books, winning the Independent Publisher Gold Medal Award for Best Regional Nonfiction in 2009 for Movers and Shakers, Scalawags and Suffragettes: Tales from Bellefontaine Cemetery. Shepley and her husband have three daughters.