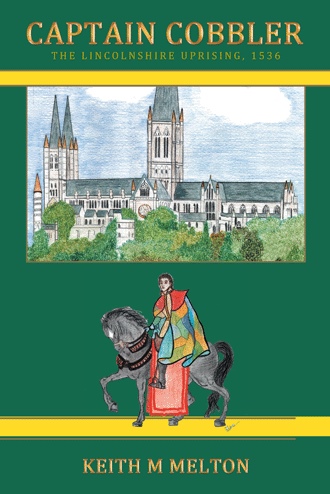 Keith Melton’s new novel is a “Tour de force” extending from the bloody, treacherous ending of the Plantagenet dynasty when young Lancastrian upstart, Henry Tudor killed the nasty Richard lll in the Battle of Bosworth Field through to a rebellion against Henry Tudor’s second son, Henry Vlll in 1536 in the Author’s County of Birth, Lincolnshire.

[By the way, that was not swearing…. It was both Bloody and it was Treacherous, full of medieval conspiracies, ranging from the murder of Princes in the Tower, to Henry’s stepfather, Baron Stanley, waiting until the midst of battle before deciding which side to support… and he was only just in time – for Richard lll was within a sword’s length of killing the Tudor ‘usurper’ before he was shot in the back by an arrow which knocked him off his horse, whereupon he was chopped to bits by Tudor foot-soldiers, displayed for two days so everyone could be sure he was actually dead, then thrown unceremoniously into a grave that was a bit too small for him only to be dug up 518 years later and examined to see if it was him – I am sure you have seen the recent news that DNA profiling has solved 500 year old mystery?!]

Then the novel takes us over to Alhambra Palace in Spain where a young Catherine of Aragon is playing with her childhood friend Maria de Salinas, who keeps appearing in the book to give us insights into the Court of the day and some of its machinations.

It turns out that Catherine was well-loved as Queen to Henry Vlll, so ordinary English folks were none-too-pleased that Henry put her away, though they seemed to like him a lot when he was a young, handsome(?) Prince. Then, too, he started closing down the monasteries and Abbeys, which performed a central role in the lives of a lot of ordinary folk and rumours started flying around that the churches were next to have their treasure stripped from them and the “ordinary folk” got a bit ‘uppity’ at this point and started a bit of a rebellion.

In fact it was a shoemaker from Louth, in Lincolnshire, who happens to have the same surname as our Author, one Nicholas Melton [Nicholas was the shoemaker and Keith is the author] actually started the rebellion by taking the keys from the Louth Churchwardens and, with his friends, locking their Church treasures up for the night, so they could not be confiscated.

And what with one thing and another [and that ‘thing’ and the ‘other things’ are written about in detail in the novel, of course!] the simple act of protecting the treasures escalated into a widespread rebellion and Captain Cobbler – as Nicholas Melton became famous throughout the land – started something that upset Henry Vlll a lot.

In fact 1536 was a heck of a year for Henry anyway [so much so that, as the Queen Elizabeth ll did a few years ago, Henry would have been entitled to call it HIS “Annus Horribilis!” ]

The year started with his former wife dying, probably of a form of cancer but it was widely assumed she had been poisoned by Henry himself! Then his current wife was accused of all sorts of wicked and deviant sexual behaviour and ended up getting her head chopped off, although he married again within weeks, so he was probably just fed-up with her.

Then, later in the year his bastard son, recently promoted to be Earl of Richmond, [he was the offspring of his lover Bessie Blount, who now lived in Lincolnshire] died of some illness but believers in conspiracy theory assumed he had been poisoned, possibly even by his own father because he was now old enough to be used by people as an excuse for a real rebellion.

It was this same year of 1536 that Henry and his first Minister, and now Vicar-General of the new Anglican Church, Thomas Cromwell, started the process of closing the Abbeys and Monasteries down. This was not a popular move. But perhaps of as much importance for the “ordinary folk” was the fact that Henry had decreed that about 20 separate “Saint’s Days” – each Holy Day being a Holiday for ordinary folk, of course – should all be celebrated on one day of the year, which happened to be the day the rebellion started. And all of this came to a head On Sunday October 1st 1536.

It is 1536, and the kingdom of Henry VIII is in turmoil. King Henry’s first wife, Catherine and his bastard son, Henry Fitzroy, have died suspiciously. Henry’s second wife, Anne Boleyn, has been executed, and he has married his third wife, Jane Seymour, only a fortnight later.

Meanwhile, Chancellor Lord Cromwell is dissolving monasteries and abbeys, trampling religious traditions, and unsettling the community. Rumours are circulating that Cromwell is about to steal the Church silverware as well, and Nicholas Melton—a shoemaker from the town of Louth—and his friends decide they have had enough. Determined to protect the people’s treasure from royal coffers, Melton and his friends take the keys of the church of Saint James from its reluctant churchwardens.

After they secure the building and lock away the town’s treasure to keep it safe, their protest quickly gets out of hand, disturbing the peace of the kingdom. Rather than listen to his subjects, King Henry behaves like a tyrant, threatening them with condign punishment. So, the simple act of protecting community treasure turns into a widespread rebellion as Melton, now known throughout the land as Captain Cobbler, risks everything…

Captain Cobbler shares the tale of a Lincolnshire shoemaker as he matures from boyhood to adulthood, and now challenges the might of a tyrant king.

Keith Melton is Lincolnshire born and educated, with family roots spread back in time throughout the county. Keith is the former founding director of the Institute for Sustainable Development in Business at Nottingham Trent University, where he advised businesses on environmental issues. Now retired, he divides his time between homes in Brazil and England with his Brazilian-born wife, Fatima.

Visit him online at www.captaincobbler.com