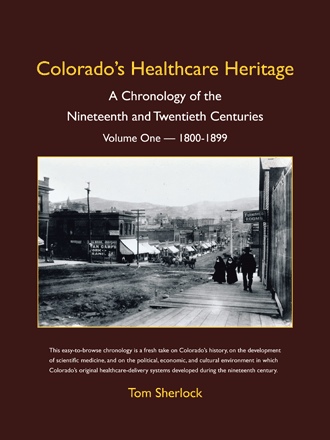 Since 1884, the Sisters of Saint Francis of Perpetual Adoration had been staffing Union Pacific Railway Hospital — a three-story hospital on a park-like campus at East 40th and York Street in Denver (about 7 miles north of City Park and about five blocks south of today’s I-70).

In 1890, Sister Mary Huberta Duennebacke had notified Roman Catholic Bishop Nicholas Matz that the Sisters were preparing to build a new hospital, and ground was broken in 1891.

The Sisters remained at the Union Pacific hospital until May 20, 1893, when the remaining Union Pacific patients were brought to the Sisters’ new St. Anthony Hospital, which officially opened on June 13.

"As time went on, the Sisters felt the need of a hospital of their own, where they might more freely dispense their works of charity and mercy. Consequently, land was purchased in West Denver, on what is now West Sixteenth Avenue between Quitman and Raleigh Streets, and the first building of the present St. Anthony Hospital was erected. The architect was a Mr. [Frederick William] Paroth [of Denver] . . . . The new building had a frontage of 205 feet and an east wing. . . . When compared with today’s hospital facilities, living conditions at that time seem most primitive." (Sisters of St. Francis archives)

The Union Pacific Hospital Fund, which supported the railroad’s hospitals in Denver and Omaha, was discontinued by order of the Court of the United States for the District of Nebraska on October 23, 1899. The Union Pacific Railway Hospital continued, without the Sisters, until about that time.

1893: On June 13, seventeen Sisters of St. Francis of Perpetual Adoration opened their new $190,000 St. Anthony Hospital at West 16th Avenue and Raleigh Street in Highlands — south of Sloan’s Lake and its popular Manhattan Beach resort, overlooking the city of Denver from the west.

In 2010 dollars, St. Anthony Hospital cost about $4,550,000. The town of Highlands was bordered by Lowell Boulevard on the west, Zuni Street on the east, West Colfax on the south, and West 38th on the north.

The new St. Anthony Hospital was a four-story brick building trimmed with granite, and had wards with 120 beds and private rooms with 60 beds. St. Anthony Hospital had a steam-powered elevator, but when there wasn’t enough coal to provide steam, the Sisters carried patients up and down the stairs.

One of the Sisters who helped in the kitchen also carried coal to the boiler house. Three Sisters milked the cows and did the canning, cooking, and scrubbing, and sometimes accompanied Sister Christina and Sister Sylveria, who arrived later, when they went out to ask for funds for St. Anthony Hospital.

Sister Mary Huberta Duennebacke — who had been administrator of the Union Pacific Railway Hospital since 1890 — became the first administrator (1893-1902) of St. Anthony Hospital. Her successor was Sister Mary Jacobine Bierman (1902-1905).

During June 1893, St. Anthony Hospital’s income was $42.00, but the Sisters prayed and worked hard and begged for financial assistance, and gradually more patients were admitted and the financial situation stabilized. Giuseppe Cuneo, MD, the first staff physician at St. Anthony, later wrote about the early days:

. . . it looked as though St. Anthony Hospital had been built out of civilization . . . . On bad wintry days the doctors preferred to come out by street car, because it was dangerous with the horse and buggy to pass under the low, dark, wooden Larimer Street viaduct on account of deep ruts, snowdrifts, ice, and movements of the railroad trains. (Sisters of St. Francis archives)

A typhoid fever epidemic swept through Denver’s Arapahoe County Hospital during February and March 1896. There were 21 cases in 21 days — two interns, eleven nurses, three orderlies, three women who worked in the laundry, and two members of the superintendent’s family came down with typhoid fever.

Josephine Kloth, RN — the 31-year-old superintendent of the Colorado Training School for Nurses at Arapahoe County Hospital since 1894 — died on March 16, 1896. She had come to Denver from Cincinnati City Hospital, where she had been assistant superintendent of nurses. In 1891, Miss Kloth had graduated from the Cincinnati Training School for Nurses (established in 1889), and she had done postgraduate studies at the Royal Infirmary in Edinburgh, Scotland.

Dr. Matthew Henry Gardiner — a 26-year-old resident physician who had received his MD in 1895 from the University of Colorado — died on March 18, 1896. Herbert W. McLauthlin, MD, spoke about the epidemic to the 1896 annual meeting of the Colorado State Medical Society:

"It occurred in February and March — months in which typhoid is infrequent, and at a time when there had been no known case of the disease in the hospital for some months, and when throughout the city there were only a few isolated cases, while nothing like an epidemic had occurred for several years. It was confined almost entirely to the officers and employees of the hospital, nineteen out of about forty being attacked. . . . The 150 patients escaped entirely with the exception to two. Those attacked neither ate, slept, nor worked in the same buildings. . . ."

Dr. McLauthlin’s description of what happened to Dr. Matthew Gardiner, the recent CU medical school graduate, suggests why typhoid fever was so feared:

"Case No. 1 — Dr. G., chief resident physician, age 26, was the second person to give up, after having felt ill for one week. There was intense headache with general aching. The temperature quickly became high, ranging from 104 degrees to 106 degrees, without remissions, during the first week. During the second week it was somewhat lower, with morning remissions. In the middle of this week there were hemorrhages from the bowels, the first one occurring on the ninth day after going to bed.

"By the middle of the third week the temperature had fallen to 102 degrees at night, while his general condition was extremely good. At this time, after exposure to a cold wind from an open window, he developed a left-sided pleurisy. There was much pain, abundant friction sounds, while the temperature rose to 105 degrees.

"Within three days the typhoid symptoms became more aggravated than at any time previous. Hemorrhages recurred, while at the same time he developed diarrhoea, tympany, subsultus, and delirium. The pulse rose rapidly, ranging from 150 to 175 for two days before his death, which occurred March 18, in the middle of the fourth week, and eight days after the complication and aggravation of the symptoms arose. Dr. [Herbert] Whitney was in consultation in the case." (Transactions of the Colorado State Medical Society, 1896, pp. 156-157)

Dr. McLauthlin’s team thoroughly investigated the hospital’s water, refrigeration, and food supplies, and concluded that the epidemic had been caused by contaminated food purchased at a local grocery store and eaten at the hospital by staff and employees, but not by patients.

In the early days on the Colorado frontier, women took care of family and neighbors because accepting that “we’re all in this together” was the only realistic survival strategy—on the high plains, along the Front Range, in the mountain towns, and on the Western Slope.

As dangerous occupations became fundamental to Colorado’s economy, if they were injured or got sick there was no one to care for the young men who worked as miners, steel workers, cowboys, and railroad construction workers in remote parts of Colorado.

So physicians, surgeons, nurses, Catholic Sisters, Reform and Orthodox Jews, Protestants, and other humanitarians established hospitals and—when Colorado became a mecca for people with tuberculosis—sanatoriums. Those pioneers and the communities they served created our community-based humanitarian healthcare tradition.

These stories about our Wild West heritage honor the legacy of our 19th-century healthcare pioneers and will inspire and entertain 21st-century readers. Because we can be inspired only if we understand the facts—and because facts are more likely to be understood when presented in context—this chronology includes national and international developments that establish an indispensable frame of reference for understanding how our pioneers created the local-community-based healthcare system that we’ve inherited.

Tom Sherlock grew up in Washington, DC, and did graduate studies in the U.S. and Germany. A website producer and online marketing strategist since 1994, he gave workshops on the Web as a clinical tool to physicians and nurses, and has collaborated with medical school faculty, physicians, and group practices. He has studied Colorado history for thirty years.