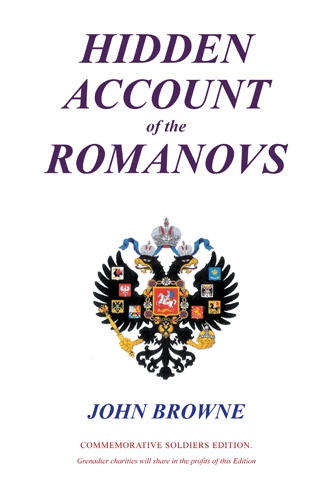 Preparing for President Putin’s State Visit in 2003, the Bank of England is ordered to return any remaining Czarist money to Russia. The Bank’s trustee of the former Empress Alexandra’s secret trust account resists. To support his case, the trustee investigates the revealing career of a Grenadier Guards officer. The evidence trail follows the Grenadier though the trenches of World War I, including active service events involving The Prince of Wales, Winston Churchill and the Royal Flying Corps.

The backdrop is Imperial Russia and the extraordinary lives of Emperor Nicholas and his family. While history recorded three women surviving the initial shootings of the Imperial family, only to be killed later when they cried out, rumours erupted of a female Romanov escapee. Stalin determined to liquidate her.

In 1918, the Grenadier offi cer is posted to Russia to locate and aid the escape of Romanovs. Attached to a Cossack regiment, a peasant girl rescues him from Red soldiers.

Against a background of international intrigue and Imperial elegance the story winds through two of histories greatest mysteries, the murders of the Imperial family and Rasputin. King George V’s hitherto misunderstood delay in rescuing his cousin Emperor Nicholas is explained. Questions challenging conventional history run through the story, including amazing evidence, suggesting the British MI6 organization of Rasputin’s assassination and Trotsky’s raising of Bolshevik seed capital in New York.

John Browne, a Pittsburgh Tribune Review columnist and senior investment strategist at Euro Pacific Capital, was raised on a family farm near Bath, England. A historian and economist, he graduated from Malvern, Sandhurst, Cranfield Institute of Technology and Harvard Business School. Formerly with Morgan Stanley and a Member of Parliament, he lives now in Florida. In the Grenadier Guards, he served in British Guiana as the 2nd Battalion pilot.