Arrivals and Departures from Normal 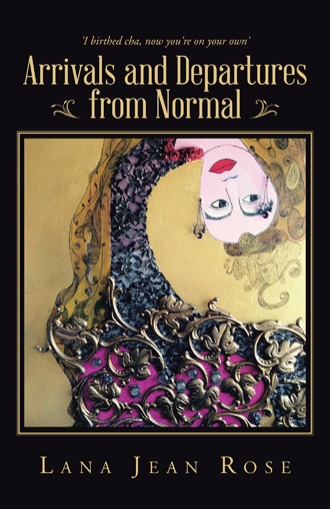 Air; her two younger brothers, Ron and Jim; and her dad, Mitchell, all sat down at the table with the usual apprehension. Dinners were the highlight of the day for D. J. since this was the time she’d announce her latest plans for her new project.

Air sat tensely and stared at her mother. She could feel the beginnings of an achy tummy accompanied with the onset of the loss of her appetite. Mitchell just sat there staring out the window with a look that said, Jesus, here we go again. The family could sense D. J. was just a little too happy, which was a signal of a looming announcement.

Her plans were a reminder to the kids that they dare not bring any of their friends’ home from school. No doubt, Air and her dad and brothers were about to hear all about what would be the latest in a series of creations that looked like the early works of Tim Burton, if he had lived in Texas in the fifties. She did not create anything normal or pleasant to the eye; it was not in her nature. She said normal things were ugly and her creations were “un-use-u-elle” and true art. She was convinced everyone envied her talents.

D. J. set fried chicken and okra in the middle of the table. She sat down and smiled at everyone. “Daddy!” she squealed in a way that had way too much zealousness in it. “I think it’s ’bout time we did some re-deck er-ate-in!”

The family moaned in unison, and little Jimmy, who was six years old, started crying. Air tried to soothe him while she rubbed her own tummy.

In Texas, everyone knew there was a general unspoken rule that sheep followed sheep—as in, ever’-ba-dee’s house otta look like ever’-ba-dee else’s house. D. J. did everything in her power to explain to the family her deep belief they were “u-nique” and different from everyone else.

“Mom, what kind of redecorating are you thinking about?” Air asked, as if she was interested rather than apprehensive and about ready to throw up. “I think the house is perfect. It looks as nice as everyone else’s house in the neighborhood.”

“Wh-elle now, honey, that’s e-zack-u-lee my point, ack-shoe-ally! Ain’t no sense us tryin’ ta be like ever’-ba-dee else ’cuz we’re u-nique! How many times I gotta remind y’all we’re special and we outta be proud!”

Air sat there staring at her plate. She thought about how her mother spent so much time “creating” instead of being a mother. Creating was not something other mothers did, and D. J. was always up to something bizarre and extremely embarrassing. D. J.’s deep Texas accent upset Air as well. It was as though she wanted more attention than she deserved, so she’d make a point of drawing out every word. Air remembered when she was barely five years old and D. J. had come to her and said, “Airstream, honey, if ya ever meet up with the devil, ya just lookie him straight in his eyes and ya tell him you ain’t got no time for him! Ya just keep right on a-walkin’!

D. J. was a tiny, bird-boned woman, barely five feet tall, skinny as a rail, and with long, coal-black hair and beady, dark brown eyes. She hadn’t always looked that way. When she was a little girl, she’d had beautiful blonde hair with soft curls and skin as white as pearls. When she was sixteen years old, her beautiful blonde hair started growing black roots, startling everyone who knew her. Her skin had transformed as well, her extremely fair complexion slowly becoming a dark olive. Her parents made sure pictures of D. J. as a child were displayed as prominently and profusely as possible to prove she’d come from pure German descent. Everyone in the family was fair skinned, had a freckled complexion, strawberry or blond hair, and brown eyes. The family felt tremendous pressure to make up a story about what the hell had caused D. J. to go through the inexplicable physical transition.

Of course, everyone in town whispered that she was “possessed.” Some said God had simply “willed” this blessing, and they were all just to accept “his way.” This may have been the beginning of D. J.’s hardheadedness about “the way.”

“There ain’t nobody gettin’ in my way!” she would chant while creating.

She was considered the black sheep of the family. She emitted a presence that warned others, “Don’tcha even think of fuckin’ with me.” She was forever telling the kids, “Honey, we’re unique!” She rebelled against everything her parents told her she should do whether it was the way she wore her hair or the way she dressed. She wanted to be different. She did not want to go to church or participate in normal family activities. She was convinced other women were evil and would stab you in the back given the chance.

Every Sunday, all the family members, aunts, uncles, and cousins, gathered at Air’s parents’ house for Sunday brunch. Air prayed her Mom would, for once, go into the parlor with all of her sisters and paint “purdy little roses” on thin, eggshell china plates. D. J. would have nothing to do with the useless activity. She would remark, “That ain’t art! It’s just wasted earth life time!”

Air’s grandparents, Papaw and Mamaw, were the heads of one of the wealthiest and most prominent Texas families. They owned thousands of acres of cornfields and herds of Black Angus cattle. Papaw was a Mason and a very remote man, except when it came to any family decisions. Mamaw was always quiet, rarely uttering a word.

Sadly, the family had a big secret. Just as her hair was coming in black, D. J. had run off with her girlfriend to experience New Orleans for the weekend without permission. The very first night, she met a truck driver and fell in love with him and ended up getting herself “preggers.”

Since Papaw and Mamaw’s main concern was to keep the family’s name from being “tainted,” they told all their friends D. J. had been accepted into a famous fashion house in Paris and would study fashion design for three years. They told everyone D. J. had been preparing for this for quite a while and had the deep “feelin’” that she should pack and be prepared to fly to Paris in a moment’s notice. In fact, they lied and said she’d actually already flown over to Paris and had even met an ambassador’s son she was quite fond of. Mamaw thought this story would work and D. J. would be allowed back home after the child was two years old.

Meanwhile, Papaw and Mamaw made arrangements to send D. J. to live in New Orleans with Mitchell, the truck driver, in one of Papaw’s trailer properties, which he owned all over the United States. Mamaw kept telling elaborate stories of how D. J. had met the man of her dreams in Europe. She’d update the community at church each Sunday. Mamaw and Papaw would act real proud, since D. J.’s new love was supposed to be from a prominent French family, and they’d hint about their suspicions of a weddin’ in the plannin’.

In reality, Air’s father held down two jobs. One was as a vegetable truck driver, and the other was making sure D. J. was always busy because “idle hands were the work of the devil.” It was true. D. J. was always up to something that would make eyes roll, whether it was the way she was dressed or the forever coming response—“My God, D. J., what in hell is that?’—to her latest fashion “dee-zign.” Did she, for example, realize her pink-stained white tennis shoes didn’t have any shoelaces?

A naïve teenage girl in her senior year of high school comes home to find all her belongings packed and sitting on the front porch. Airstream’s abusive father, who silently laments the loss of his baseball career, and a mother, who lives in a world convinced she is Cleopatra before Cleopatra was Cleopatra, have decided Air is a “commie-pinko” since she reads Ramparts and the Berkeley Barb. From an early age, Air realized in order to survive her bizarre family life she had to protect her authentic self. Whimsical, innately talented, and fiercely independent by nature, Air struggles to piece her life together as she finds herself continually caught in you’ve-got-to-be-kidding-me circumstances. The author marvelously portrays heart-rending stories with wit and humor. Despite being emotionally abandoned by her parents, Air becomes an engrossing, strong and fascinating young woman, determined to be a successful artist without any formal training. Ingenious and persistent, Air is on a mission to confront her demons and multi-personalities, surmounting the endless, inexplicable far-fetched absurdly funny bumps in the road to prove she is lovable and worthy of love. Air’s life path is far from normal.

Lana Jean Rose is an acclaimed environmental artist who has received grants from many notable foundations such as the National Endowment for the Arts, the Rockefeller, Zellerbach, and the Walter and Elise Haas Foundation. She has exhibited throughout Europe and the United States. Rose’s true passion is writing.