A Story of Tragedy and Forgiveness 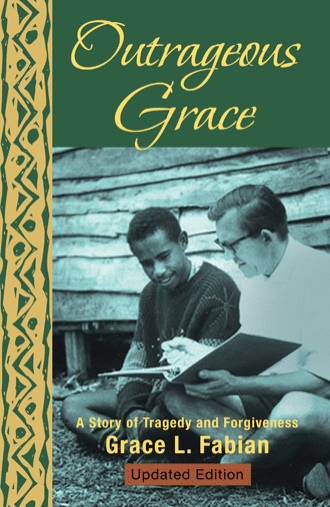 Chapter 1
The Birds Keep Singing
"My world stopped in earth-shattering suddenness, yet not one bird stopped singing."

A white-collared kingfisher swooped down, landing on a branch of the pine tree just outside my office window. Its azure blue feathers contrasted with the brilliant purplish-red color of the bougainvillea. That thorny vine draped itself around the pine branches like strings of Christmas tree lights. "Is there really a pine tree under there?" a friend had once asked.
Many unusual creatures like kangaroos, leatherback turtles and flashlight fish live on this island of Papua New Guinea connecting the Indian and Pacific Oceans.
I favored the exotic birds. I called them "feathered friends,” mainly because they kept the insect population down, though they did more than minimize my chances of contracting malaria.
There was something reassuring about their throaty notes and the way they glided through the air. They inserted an element of pleasure and peace into my high-energy schedule by their glorious songs and brilliant plumage. I gave myself a little pat on the shoulder, proud that I could name so many of the birds of our adopted country--the
mannekin, lorikeet, honeyeater and lovely snow-white cockatoo. When my husband, Edmund, our children and I traveled back to America for what we missionaries call “furlough,” I enjoyed telling people that Papua New Guinea has the largest pigeon in the world, the largest and tiniest parrots in the world, with at least eight hundred species of birds, more than the U.S. and Canada combined.
The kingfisher was a frequent visitor to this spot and my family laughed when they heard me greet him with a cheery, "Good afternoon, friend.”
I kept my eyes on the kingfisher. This afternoon he seemed to be looking straight at me, like he knew something I didn't.
I felt a soft afternoon breeze through the open louver windows and reminded myself that at sunset, when vandals roam freely, we should remember to shut and lock all the windows. But now with the tropical sun's rays all around us, and friends beside us, we were safe, weren't we?
After a series of high-pitched nasal notes, as if in gentle warning, the kingfisher flew off. All I saw was a flash of blue wings. I need to tend to the job at hand and stop the bird watching. I smelled the coffee perking in the kitchen and glanced at the clock. We believed in coffee breaks almost as strongly as we believed in the work we had come to do on this fascinating island. We were missionary translators, determined to learn the Nabak language, devise an alphabet, and eventually translate the Bible for this group numbering 25,000.
It was three o’clock in the afternoon. The steaming cups of coffee and plate of crackers and peanut butter I planned for my husband, the two Nabak translation helpers and myself, would give each of us a much needed boost of caffeine, sugar and protein for our translation work.
But then the older of the men ran past my window and out the driveway.
" Geŋ zigok?" I shouted.
No answer.
"Where's Miliŋnâŋe going?" I called out, turning to my husband's office.
No answer.

Strange. I swiveled in my chair and walked through the tiny room adjoining our offices and peered into his office. If no one was around I'd wait with the coffee until they came back.
Instead of two men engaged in energetic discussion of Nabak words and phrases, my husband, Edmund, was alone at his computer, slumped back in his chair. An axe hung from the back of his head.
An axe? I stared. Am I going mad? Surely I'm hallucinating. Cold fear crept through my entire body.
No, no, please, this can't be happening,” I sobbed.
One minute my mind spun out of control, the next, I stood stupefied, refusing to believe the dreadful reality before me.
I rubbed my eyes, patted Edmund's shoulders and sensed the truth instantly. This was no dream. My teeth chattered. My stomach lurched.
Someone had murdered Edmund.

The Master Creator, unimaginably, wants to partner with little me in redeeming His world--but only on His terms, terms that quite often are different from mine.
On the screen of my mind all of our successes in winning the hearts of the Nabak people, the struggles to master their language, the misery of dengue fever, being separated from two of our children, and the isolation, flickered past and seemed to explode in some kind of horror movie. Had it all come down to this?
A surge of adrenaline took over. Without hesitation, I pulled axe out. Blood splattered everywhere--on my skirt, on the carpet, down Edmund's back. My hands were covered with blood--my husband's blood. This is a sacred place, a room where we sing praise to God and pray every morning, dedicating ourselves to the holy task of Bible translation. This is not the way it's supposed to be.
I dropped the axe on the floor and ran to the phone to call for help. "Someone has just killed my husband,” I stammered. My voice didn't even sound like it belonged to me.
Then I raced back to the office. It was far too late for any first-aid treatment I could give but I tried pressing the gaping wound together anyway. I stepped back from that hideous sight.

Could this be the same Thursday that started with me humming while I scrambled the eggs for breakfast?
That very morning I had brimmed with excitement over the idea of finishing our missionary project, the translation of the Nabak New Testament. What a beautiful Thursday on the tropical island of Papua New Guinea! Just yesterday, Edmund and I had finished the major check of the Gospel of Luke: a milestone. And he had only four more chapters to go in I Corinthians.
"God's in His heaven and all's right with the Fabian world,” I declared as he and our 16 -year-old twins, Heidi and Kurt, joined me for breakfast. Daughter Heidi gave thanks for the food and prayed for her big brother, Jonathan, and big sister, Dietlinde, back in the United States.
As everyone paid attention to their fruit juice and toast, I announced, “We should be able to finish the translation of the Nabak New Testament this year.” A two year schedule formed in my mind and I recited:
"Finish all the major checks this year.
Proofread and typeset next year.
Celebrate with the Nabak people before you two graduate from high school and return to the U.S.A. for college.”
I looked around the table. The twins had seldom seen their mom this bubbly at breakfast. It's do able!" I exclaimed. "After 24 years on the project, at last, the end is in sight.”
"Let's get on with it,” Edmund said. "I'll easily finish chapter 12 this morning.” And he headed to the office.
"Go for it, Mom,” the twins said as they cleared the table and grabbed up their books for school.
But that was this morning. Edmund was alive and warm. Now, this afternoon, something dreadful, something unimaginable had ruptured my well-planned

That morning, a beautiful day on the tropical island of Papua New Guinea, Grace Fabian brimmed in excitement over the idea that she and her husband, Edmund, were close to finishing their missionary project, the translation of the Nabak New Testament. But, while in the midst of translating the love chapter, 1 Corinthians 13, someone murdered Edmund.

In this memoir, Grace narrates the couples’ life story—of their separate journeys before they met, to their shared life as missionaries. She tells the story of how she and her four children wrestled with grief and disorientation after Edmund’s murder. She speaks of the family’s quest for answers and of the difficulty of meshing two different worlds—the culture of the Nabak people in Papua New Guinea and of her Christian heritage from the United States.

Grace shares how she faced the challenges of forgiving the murderer, having rocks thrown at their home, receiving eviction notices, and navigating a court case in a foreign country. Outrageous Grace shows how Grace and her children discovered that God orchestrated an amazing story of redemption and forgiveness.

Grace L. Fabian, MA, DDhc, served with Wycliffe Bible Translators, first in Mexico and then in Papua New Guinea. The mother of four children, Grace now lives in Pennsylvania, where she speaks, teaches, and writes. Visit her online at www.GraceFabian.com.