by Translated by Dr. Hedwig Hamer 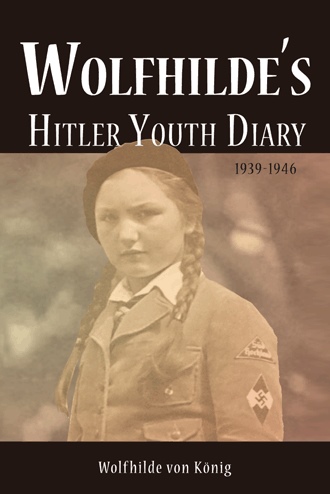 Wolfhilde's Hitler Youth Diary
is the chronicle of a girl growing up in Munich
during the most volatile time in world history.

WHAT OTHERS HAVE SAID ABOUT THE DIARY

For an in depth review of The Diary, please visit The Herald Palladium.

Initially, the material upset me emotionally in an unexpected way. It took me some time to re-read the diary entries one by one to gain a calmer perspective. Of course, for 60 years or longer I have been aware of the strategies and tactics, the techniques and methods applied and utilized by the Nazi regime to contaminate and poison the minds and souls of people—beginning with children from the age of 10—with its fierce, all-embracing ideology.

Never, before reading Wolfhilde's Hitler Youth Diary, have I been confronted with such massive, monstrous evidence as to what the Nazi regime was doing to us—and how they did it. What is presented here in the diary of a girl from 13 through 21 years of age is a textbook example—concrete evidence—of how they did it.

Wolfgang Schleich, 1928-
Journalist. Retired since 1990 from Radio Free Europe,
where he worked for almost 35 years as a reporter, editor,
traveling correspondent and head of the network’s Berlin Bureau.

Wolfhilde von Koenig grew up in Munich during a very volatile time in world history.

In August of 1939, two months before turning the age of 14, she began to keep a journal of daily life in a country that had just initiated the beginning of World war II.

Writing of her personal experiences as well as tidbits of news the German people were allowed to read and hear, you begin to understand the mindset of a proud people. Each entry becomes more vivid as she adds clippings and photos from newspapers, magazines, and ration cards that were part of everyday life.

From home life to school life, working to volunteering, one sees the total involvement of the people during this time of war and the affects it had on all.