A Connecticut Cavalry Officer in the Civil War and Reconstruction 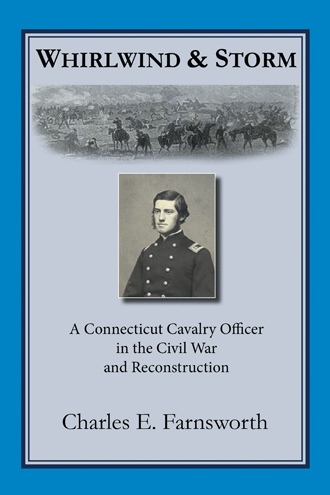 “Whirlwind & Storm introduces us to the colorful and impetuous Lieutenant Colonel Charles Farnsworth, a Connecticut cavalryman in the Union Army. Farnsworth was fiery, ambitious, and bold, sometimes a little too bold for his own good---in combat, in business ventures, and in the river crossing that ended his life tragically early. Drawing from a rich and previously ignored trove of letters and diaries, Farnsworth’s great-grandson and namesake, a military veteran himself, has done a marvelous job of bringing alive this officer in all his flawed glory.” Adam Hochschild, author of To End All Wars: A Story of Loyalty and Rebellion, 1914-1918 and other books. “A scholarly biography of a midlevel Union officer’s short, dramatic life. This spotless debut is a personalized account of the Civil War years and a work of significant original scholarship…First-rate research, writing and presentation.” Kirkus Reviews “[I]t is always a special privilege to delve inside the thoughts, passions and driving forces of one who served as a leader during the [Civil War]. This captivating biography…does just that with skill and flair, exploring not only the young man’s war experiences but his business adventures, loves and personal struggles.” Blueink Review An intimate look at a young Norwich, Connecticut cavalry officer---in war, love, and his attempts to strike it rich---and his fierce ambition to make his mark in the Civil War and early Reconstruction. Lieutenant Colonel Charles Farnsworth’s letters and diaries form the cornerstone for this short biography about an adventurer who helped organize the First Connecticut Cavalry. The book covers “Charlie’s” near-fatal shooting while searching for Confederate bushwhackers in Virginia, his protests against incompetent Union leadership, his capture and confinement in Richmond’s notorious Libby Prison, his romantic entanglements, his political connections with President Lincoln that sent him south in early 1865, and his tragic struggle to make his mark in Georgia during the early years of Reconstruction.

Charles E. Farnsworth, lawyer, mediator, arbitrator, and former Marine officer, received his bachelor’s degree from the University of Kansas, master’s degree from Mills College, and law degree from Stanford University. He and his wife Elizabeth have two grown children and live in Berkeley, California.