A Personal Story of an American Immigrant 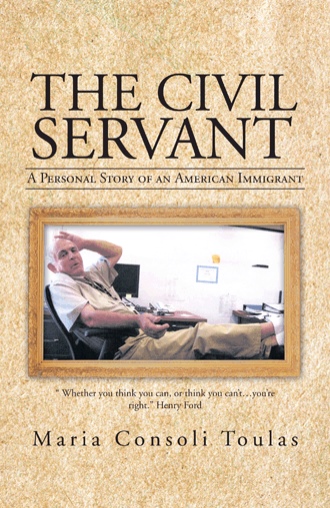 Andreas had so much to be thankful for. He knew he had made the right decision to be a civil servant in the most stable country in the world. Andreas did look forward to his retirement and the joys it would bring: spending time with his family in Greece, touring the USA, time to play with his grandchildren at the beach, the joy of collecting a social security check each month and getting a pension check each month, withdrawing from his deferred annuity, sharing in Maria's pension and social security. He told Maria he had no regrets that he followed his bliss and became a civil servant in the United States of America.

is a memoire which tells the story of a Greek immigrant who longed to be an American Civil Servant. It also reaches back to the author’s roots in Italy and stretches across the American landscape to modern times.

It is timely, humorous and poignant. This is a record of the soul of one successful American immigrant told by an onlooker, his wife.

Maria Consoli Toulas, a retired Bellmore-Merrick social studies teacher lives in Rockville Centre, NY with her husband Andreas. They have been married for forty-one years and have two children. Over the course of years Maria had kept journals that she combined into THE CIVIL SERVANT, a love story and a family history of immigration and acculturation into American society.