RESET: Make the Most of Your Stress 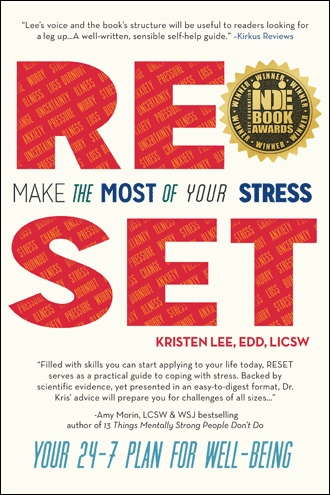 Preface The Man Who Ate a Plane When the well’s dry, we know the worth of water. — Ben Franklin "No bananas for me!” cried the Frenchman, not to be distracted from his main course. “Bring on the bolts!” It was 1978 when Michel Lotito’s appetite for indigestible objects got the best of him. It wasn’t enough that he had already purposely devoured bicycles, shopping carts, and razor blades. For two years, Monsieur Mangetout—or, “Mr. Eats-All”—devoted himself to eating a Cessna-150 aircraft. Two pounds daily brought him to his goal, adding to his nine-ton lifetime tally of metal (and perhaps mental) mayhem. What made this possible? Mr. Eats-All apparently had unique attributes contributing toward his record-breaking binges. His super–Charmin-cushioned stomach and eccentricities helped him defy convention. But, there’s more to it. Mr. Eats-All understood the importance of slow digestion. Bit by bit, he was somehow able to tolerate the distress he willfully invited. Even with his stomach of steel, slugging down the pieces would have been dicey if he had gone over his two-pound limit. He could process the foreign objects only in manageable chunks. He knew when to say “when.” This is not something I recommend doing at home, but there are lessons within this story of culinary chaos. Despite Mr. Eats-All’s ingestion of toxic materials, his tank remained resilient, and he found his maximum threshold for how much he could process. Adult life leaves us having to digest overwhelming amounts of information. Stress doesn’t come in neatly packaged rations; we’re forced to process change, loss, and harsh realities in heaping portions. Like our stomachs, our brains have limits to what they can effectively tolerate. Massive stress can leave our minds churning and on a hunt to find some sort of solace. So, what’s the remedy? Most of us have to digest things we’d rather not. Things that puncture us and keep us awake at night. Things we prefer not to mention to others. Things that seem to be beyond what we can handle. In the middle of all of this, it’s easy to be so consumed by our worries that we forget something essential to our emotional survival: we need time and tools to better take care of ourselves—before, during, and after the storms hit. As we’ll see, being able to maintain well-being in the face of stress requires deliberate action. It’s not about rapid digestion, a specific formula, or having “perfect” reactions to what comes your way. It’s not about how your friends or family cope, or how they say that you should—but what makes sense to you personally. RESET is a tool I’ve developed over many years as a therapist and teacher to help you understand your stress threshold and find ways to cope even when life seems completely out of control. It helps you build your own, unique definition of “self-care” and put it into action. When you’re feeling beyond your limits, RESET’s five components will help you get your bearings and recalibrate: Realize. Energize. Soothe. End unproductive thinking. Talk it out. Whether you know it or not, you’re already responding to stress—either constructively or destructively. By creating a plan that is unique to your own set of circumstances, you’ll be better equipped to respond to the challenges before you. How can you possibly begin to digest what life brings? It’s time to find out.

How can you make the most of your stress?

Dr. Kristen Lee Costa has twenty years of experience as a clinical social worker and educator and is devoted to promoting well-being and leveraging human potential. She is the lead faculty for behavioral sciences at Northeastern University in Boston. She lives in Westport, Massachusetts, with her husband and two children.