Devils or Angels (the Collection) 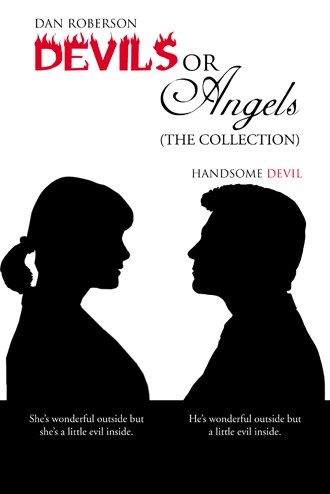 The birth was normal but somehow the baby was strangely misshapen. One leg was shorter than the other and he twisted a bit to one side. “He’s a crooked little fellow,” the doctor muttered. “Oh, no, he’s beautiful,” his mother insisted. “I’m so proud of him!” And to prove how much she loved her baby she gave him a strange name, as mothers sometimes do. “Jack My love Bartholomew” the nurse wrote on the chart. “Are you sure you want to give this boy a strange name like that? He’s going to have a hard enough time in the world.” His mom was insistent and the name stayed. Of course, in his early years Jack’s full name was rarely used. Only when his mother was mad did she call him Jack My love Bartholomew and then there were other names liberally sprinkled in. When he entered school the situation changed. The kids taunted him because of his crooked way of smiling and the way he walked. His name became a special target and he learned to endure the bullies and their little slaves. Jack always thought of the helpers as slaves because they were afraid to challenge any decision made. Suggestions from bullies were commands to be carried out. “Jack My love”, do this. “Jack My love”, do that. Jack grew tired of hearing his name in jest and sometimes he ignored the tease or refused to answer anything other than Jack. In high school he began getting recognition in sports as an excellent runner. As a running back in football his slants and cutbacks were different. His crooked way of running gave him unusual opportunities. In cross country and track he became known for his “crooked” miles. His opponents and some of his teammates asked the coaches to “Make him run right”. He ran at angles but within bounds. Although his coaches listened to complaints they saw how his awkward style led to wins. It was not in their best interests to change him. Therefore the coaches left him alone. His writing skills were superior. Because he had spent hours brooding about the taunts and teasing, he kept a journal. At first his teachers tried to change his penmanship because it was so horribly crooked and even left handed students refused to accept him. As a consequence of his crooked writing his papers were hard to read and were often marked down drastically. Eventually his teachers adapted and began discovering his raw talent. His poems and short stories were wonderful though decidedly crooked. They, not Jack, petitioned the school board for a laptop Jack could carry with him. Jack’s romantic life was simply nonexistent. Girls remarked that Jack walked funny and when he smiled, his smile was crooked. They would say, “You’re a good friend but………….. and Jack would listen to a range of excuses but never got a date. After college he thought about becoming a politician but since he was already “the crooked man” he thought that might be a bad idea. He became a lawyer instead.

Enter my world where demons and angels cross borders and change identities, where tricks can happen from either side, and where angels can be mean and devils can be nice. It is a place where love and hate exist side by side. Enter and make your choices. Each of us during our lifetime encounters angels and demons. There is little to distinguish the two because demons and/or angels can be in the form of adult or child, man or woman, a healthy person or a disabled one. It is their actions that finally show which side of the spiritual battle they’re on.

During a human’s lifetime he/she makes choices which determine which group he is allied with. Should the choices be vile or consistently bad then that individual might be classified a demon. If he or she makes more good choices he might be considered an angel.

In the eyes of other humans what kind of actions would make a person an angel or a demon? Does it take a preponderance of actions to decide the case? If a person makes a terrible mistake is she a demon for the rest of her life or is it merely a learning experience? If one great action is done is the performer then considered an angel? Perhaps it is not the action but the motive behind the action that determines whether a person is considered a devil or angel. In the collection, Demons or Angels, choices are being made. The reader should decide whether each character is good or evil at the conclusion of the story. Is there enough evidence to convict him or her of being a demon or angel? Behind each character the motives to do good or evil exists. Should his/her slate be wiped clean if she/he does an opposing action of equal value?

Reading is the fuel, but writing is the love of his life. He writes for himself and to entertain others. He grew up in Oklahoma listening to stories his father told, studying nature, and reading the works of Poe, Bradbury, and Asimov. He practiced writing imaginary stories until he realized each person was filled with dramatic stories waiting to be told. He believes that if one story springs to life, one person lives on in memory. To him, every memory that is woven into the fabric of life is worthwhile. He is retired and currently resides in CA.