by Ralph A. Garcia 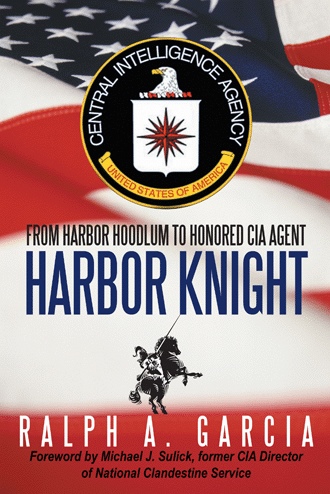 When I was a kid, there was a TV series called I Led Three Lives, with Richard Carlson. The guy played a spy, counterspy, and citizen – I often felt I was like that citizen. I was a dad, I was a Marine, I was a CIA agent, and I was a DEA agent. Life could be pretty complicated at times.

Growing up in Da’ Harbor, a rough steel town with more than its share of notorious criminals passing through, a young boy seemed destined to a life of crime or, at best, a hazardous life in the steel mill. In Harbor Knight: From Harbor ‘Hoodlum’ to Honored CIA Agent, Ralph Garcia reflects on “pivotal moments” when his life in East Chicago, Indiana might have taken a horrible turn for the worse. Harbor Knight follows Garcia through his tumultuous childhood, to fatherhood at age sixteen…and to a bunker in Vietnam, where an unconventional message to the CIA gains him an exciting career in covert defense of the United States.

With much humor (and a few other emotions), the author shares incidents from his life of espionage and speaks frankly of how this career has affected his family life. In retirement, Garcia describes how he has been given a second, unexpected opportunity at fatherhood. Keeping one foot in the spy business, he also assists veterans and youth on a variety of fronts and has become involved in politics.

“…an account of the life of that guy next door, the average American, doing his best overseas and at home to defend US national security.”

Ralph A. Garcia is a ten-year U.S. Marine Corps veteran with service in Vietnam, a former Special Agent of the Drug Enforcement Administration and a retiree of the Central Intelligence Agency, where he served as an operational intelligence officer. He and his wife, Sandy, reside in Bluffton, Indiana. Author photo by Ben Jones