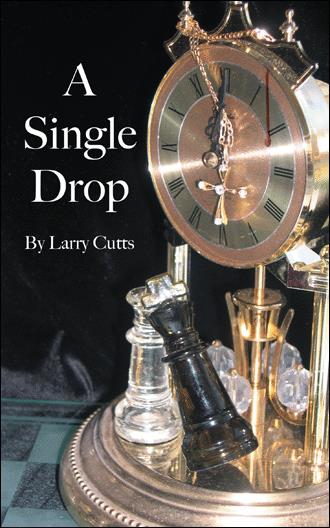 It was only a mild “pop” but all six secret agents surrounding the President grabbed their ears and fell unconscious to the floor. Their ear speakers had exploded in unison.

Sterling was now alone with the President of the United States in a locked room waiting for whoever killed the agents to break in and kill him. They certainly wouldn’t want anyone left as a witness.

Drip - a single drop of blood fell from Sterling’s nose directly onto the President’s white cuffs, a nervous condition Sterling suffered since childhood.

Sterling was terrified. He started shaking all over like he did as a child when he went on bone chilling hunting trips on top of Parker Mountain with his Dad in late November.

Sterling was no hero. Being small in stature also made him look quite frail. He usually felt shy and avoided conflicts whenever possible. He would gladly let the President die if he could live. His plan was to roll over one of the fallen agents to their good side and take the remains of the exploded earpiece to hold in his ear; then play dead.

But the President was bold and courageous in character. His military experience kicked in as he quickly grabbed two of the agents’ weapons. He tossed a 9mm to Sterling and told him harshly, “guard that door! Anyone comes in, shoot them. Aim for the head only; they’ll be wearing vests.”

The President could see how frightened Sterling was and knew he needed a partner to help if they were going to survive this assault. Sterling was turning very pale. He needed to calm Sterling down.

“What’s your name?” asked the President.

“That sounds more presidential than mine. We were meeting in recognition of your award for Excellence in Accounting, just before my speech to the graduating class, correct? I believe you had the highest GPA in this field.”

“Well, given the current shape of our financial institutions and controls, you could do a lot to help our country in the future; but first we have to survive. Time is our friend. However they rigged the earpieces, my personal security guards have an entirely different radio frequency. Other agents on duty will not be affected. They’ll call shortly for my detail to proceed with me to the stage. When they get no response, they’ll come looking. We need to survive another ten minutes or so. I can count on you; right Sterling?”

“I’ll do my best.” Drip. Another drop of blood fell from his nose.

They moved the chairs and table to block the door. The table was made of solid red oak as were the chairs. They were both heavy and could offer some protection from small caliber bullets. Although the door was also solid wood it was pine. Neither the door nor walls would stop a bullet. These were not secure rooms, they were old college class rooms. The President knew if the assailants wanted, they could easily shoot up the room from outside. They must want to capture him alive, not kill him. But Sterling was a different issue. He was only a witness.

“Please tell the President we’re ready for him on stage.”

“Which route bravo or tango?” The President answered, pretending to be an agent.

The President motioned for Sterling to duck behind the chair seat, then lifted his gun to head height.

Bang! “No such route as Tango!”

One round pierced the door hitting the man outside the door. He fell with a thud, slumping into a ball against the door. The President also dropped to the floor behind the turned over table next to the door.

Sterling was crouched behind a heavy wooden chair on its side and could see movement behind the door through the bullet hole. He aimed his gun at the hole. When he saw a reflection, he closed his eyes and fired.

The gun fell from his hand. He missed the hole by six inches but must have hit the assailant. Blood was pooling under the door.

Multiple shots rang out. Bullets were entering the room through the door and walls. With a bright flash and a loud explosion, the door was torn in half. Wood darts flew everywhere, but the chair and table sheltered Sterling and the President. However, the President was pushed back violently as the table blocking the door was ejected by the force of the explosion. He was still conscious but just barely. Sterling could see how severely the President was shaken. Luckily, the heavy thick chair did protect Sterling from the blast.

Sterling picked up his weapon and reached it over the seat of his turned chair. Without ever aiming, he emptied the gun’s magazine in the general direction of the doorway. Still terrified, and now out of bullets, he ducked his head between his arms.

“Mr. President are you hit?”

Knowing a familiar voice, “Agent Lavery?” asked the President in a weak and raspy voice.

“I’m OK. Just shaken up from the blast. I am not shot,” answered the President.

The President knew Agent Lavery. He had been assigned to watch the President’s daughter last year at the White House.

“Yes, but also thank this hero – Sterling. It was only with his help I’m alive.”

Click, click, click.Knight to Queen’s Bishop 3 (Nf3), check and mate. Sterling wins again, but unfortunately, he never gets to see his opponent’s eyes of defeat. Sterling played chess almost every night on his computer. Tonight, he played Iwin, a regular every Tuesday night. The players all used alias handles. Iwin was a very good player but had never beaten Sterling. Sterling (handle Cmate), was very good at chess but not very good with people. Playing online was safe, neat, clean; no emotions; just logic and strategy.

Sterling powered off the computer and slowly closed his laptop. He carefully placed it inside its case and squarely placed the case on the desk. Everything had its place. Sterling believed that of people as well.

Sterling had larger worries tonight than his chess game. The package contained the final settlement papers from the divorce court. He neatly cut open the package, and could smell stale cigar odor as he removed the documents from the envelope.

Manny was the only woman in Sterling’s life since his mother’s murder last year. Manny and Sterling met in college and were married the fall of his senior year. To this day Sterling is unsure if she agreed to marry him because her parents expected it, or if there were true feelings of love.

Manny’s parents were both dentists; well respected in their field and at the Andover Green’s Country Club.

“Manny when’s the date?” asked her mother. “Remember fall and spring are always booked early at the club. Sterling Charles Russell III would be a fine catch. He graduated top of his class at Bentley; already has a substantial offer at Fine, Fine and Ginsberg Accounting Firm and will probably have his CPA within a year.”

“I’m just not sure Mom,” said Manny. “I do have feelings for him, but how do you know if it’s true love? How can you tell if he’s the one for a lifetime?”

“No one knows for sure, so take some motherly advice. Go with your heart; but also, with your head. Remember the old saying, ‘it is better to be a rich man’s darling than a poor man’s slave.’ If it turns out that Sterling does not make you happy at least you will be financially ok. And; if he is ‘the one’ you have both; wealth and love.

The perfect robbery with an airtight alibi. The heist executed flawlessly; or was it? Did Sterling leave a single drop of blood at the crime scene? If he did, will it even be found?

It was only a jewelry theft; why is Sterling now being charged with murder?

Sterling’s life used to be simple, orderly and on plan. How could a single drop of blood change everything?

In his life’s journey, Larry has demonstrated two important characteristics. First, a value system that rewards honesty, hard work, and compassion. Secondly, a hardy ability to apply innovative solutions to many of life’s problems. Just thinking out side the box is far to limiting. (How do we even know it’s a box?) The abundance of creative thoughts makes his story telling unique.