In the Frightened Heart of Me 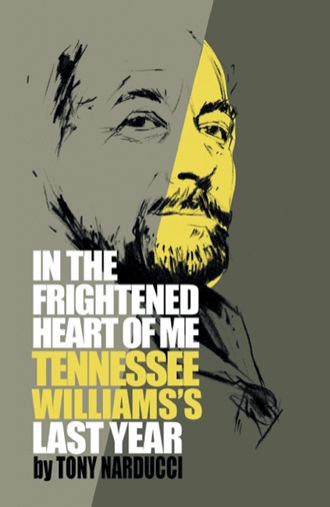 A SAILOR NAMED TENNESSEE WILLIAMS Key West: February, 1982 “Would you like a kind stranger to help you down the stairs?” He turned from the railing he clutched with both hands, looked at me wide-eyed over thick, TV screen glasses, and without acknowledging my trite introduction returned the courtesy. “Yes, I believe I could use some help.” I held his left arm with my left hand and wrapped my right arm around his shoulder. Slowly we descended the stairs of The Monster—the outdoor disco that was our nightly destination. It was Tennessee Williams, the greatest living playwright and perhaps one of the greatest artists of the 20th Century. His plays are renowned throughout the world. Most of them have been made into films: The Glass Menagerie, A Streetcar Named Desire, Cat on a Hot Tin Roof, Sweet Bird of Youth, and Night of the Iguana. Hollywood’s best and most famous brought his resonant characters to the screen. Icon of the 1950s, sought after guest on TV talk shows, in the news for scandalous behavior, champion of sexual liberation, openly gay, father of some of the best plays ever written. I was fourteen when I first fell in love with his poetry. He was instantly recognizable to me. I read everything by him or about him. He was my hero.

Tony Narducci fell in love with Tennessee Williams’s poetry when he was fourteen years old. For Narducci, Williams was the genius who redefined theater in America, most accomplished modern playwright, and perhaps one of the greatest artists of the twentieth century. So when thirty-three-year-old Narducci met Williams at a Key West bar in February 1982, the encounter was more than coincidence. It was destiny. In In the Frightened Heart of Me, Narducci narrates the story of how, after that first meeting, he was drawn deep into Williams’s life and work—a journey that would change Narducci’s life in every way. Companions until Williams’s death in February 1983, this biography shares how their time together was an odyssey of adventure, emotional entanglement, and insight. While providing a glimpse into the Key West of the early 1980s, In the Frightened Heart of Me blends the events and sorrows of Williams’s last year on earth with Narducci’s life-changing story and the effects of their relationship. It tells how 1983 was the year Narducci evolved from a floundering, young aspiring artist to a focused business entrepreneur. It was the year he watched his literary hero, a titan of literature, become a frightened, dying old man—and the year AIDS took the lives of many of his loved ones. It was the year that defined his life.

Tony Narducci is a business consultant living in Chicago. His expertise is in building collaborative organizational cultures that foster learning and growth. For the past twenty years, working with Fortune 200 companies, Narducci has earned a reputation for producing qualitative and quantitative business results. This is his debut book.