THE IMMINENT COLLAPSE OF AMERICA AND OF THE WHOLE WESTERN CIVILIZATION

A DIFFERENT PERSPECTIVE OF CONTEMPORARY HISTORY WITH THE EYES OF G.B. VICO. BIRTH RATES AND MATERIAL PROGRESS. THE SHORT-SIGHTEDNESS OF WESTERN POLITICIANS. THE TROUBLED AND PASSIONATE POLITICAL EXPERIENCE LIVED BY PEOPLES IN A PHASE OF GROWTH AND DEVELOP 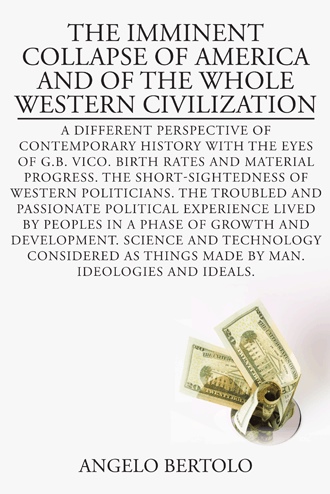 In the 5000 years of the history that we know, great empires grew and fell according to certain patterns that repeat themselves like laws of nature. The USA rose and grew to prominence in the world, reached its zenith in 1945 with the military victory and with the atom bomb, but is not destined to stay there forever.

The book tries to draw the attention to the signs of decadence that match the patterns of the decadence of previous empires in history, and the patterns of growth, of progress – in other cultural milieus: very few pundits in America, and in the western media in general, seem to be aware of this fact.

The birth rates keep diminishing in America, and are very low in Europe. In other civilisations the birth rates have been high, and those countries count more in the world today, politically and economically, than a few generations ago. In addition, the irrational and passionate attitude of those peoples, including the aggressive suicidal attitude with religious and political connotations, is a sign of progress for them.

Those people who are in favour of family planning programs and of a more relaxed morality – are acting against the general interests of their countries.

Prof. Angelo Bertolo was born in the north eastern region of Italy, Friuli, in 1939, attended a classical school with extensive study of Latin Greek history and philosophy, modern languages, and more recently he took an interest in other civilisations such as India and the Semitic peoples of the Bible. His interest of the history of the ancient and the modern world is comprehensive, not only wars and treaties but all manifestations of the human spirit: the creation of arts, sciences, evolution of the political institutions, rise and fall of great powers – in the tradition of Humanistic Renaissance. He is interested in finding patterns of facts and situations that repeat themselves in history, in the courses and historical recourses according to the philosophy of G.B. Vico. With two publications in 1984 and 1987 he was able to predict the evolution of the institutions in Russia (harsh dictatorship towards a form of democracy) with the loss, partial at least, of political and military power. Now he seems to anticipate the collapse of America, and of all the western world to the advantage of other civilisations – we do not know with how much eventual human suffering. Birth rates, and life at a social level, are one of his most important patterns in order to understand history of men on this earth.