by Arvid B. Erickson 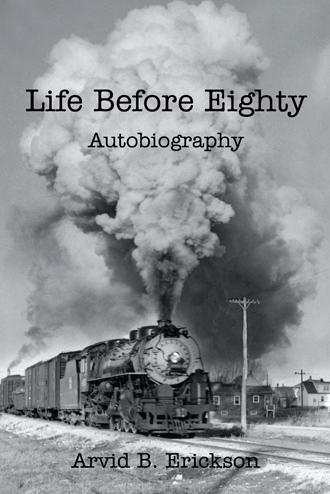 The Erickson kids will have the distinct, special, and exclusive pleasure of knowing their father as few other children know theirs. And they’ll be the richer for it.

Oh, that Arvid Erickson could really write! He had the soul of a poet and a very big heart. As he moves from decade to decade his love for his wife and all those kids who came one after another comes shining through. Very touching is the chapter in which he tells how difficult it was, as the town telegrapher to bear the news of soldiers’ deaths during World War II to heartsick parents. One that touched me was Raymond Langworthy’s response when Erickson told him the news of his son’s death...His response? “Damn that Roosevelt!” Others just wept. And Erickson became the dreaded messenger of death.

As for the businessmen and civic leaders in town, Arvid B. Erickson does not suffer fools gladly (there were plenty to go around) and says what he figures needs to be said.

Commenting of Woodrow Wilson’s role in plunging us into war in 1917, Erickson writes: Destiny can be seen at times how we will. Men, being short-sighted, can see no farther than his generation, but actions and their peoples are only pawns in the hands of Destiny, moving and manipulating them as a great chess player does.” Pretty good for a depot agent, don’t you think?

Arvid B. Erickson was born in 1889 to immigrants from Sweden. Though the family had minimal worldly goods the children lived with examples of love, thrift, learning and improving. As a young boy Arvid wanted to be a telegrapher, a goal he achieved providing for him the opportunity to contribute to mankind and to support his own family. (see Arvid B. Erickson’s preface to his book) His longest held assignment was as Depot Agent - Telegrapher in Whitehall, WI (see picture above). Every one of his children graduated from Whitehall High School each moving on to his/her destiny. He and his wife, Sarah, were strong examples of loving, independence, kindness, generous spirit, and sense of responsibility.