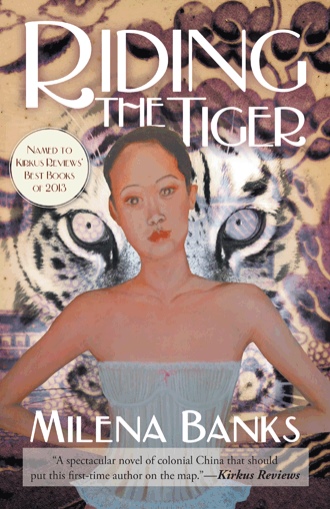 “Debut novelist Banks crafts a sweeping tale of seduction, betrayal and war...(her) evocative prose is impressive throughout....Banks delivers an engaging tale of forgiveness and the strength of familial ties, even when those ties have been frayed almost to extinction. A spectacular novel of colonial China that should put this first-time author on the map.”

In the turbulent years of the late 1930s on the China coast, Jack, a powerful foreign business tycoon, and Ana, a sensual and deep Russian jazz singer—meet as strangers and part as lovers on the night Shanghai burns and falls to the Japanese. And then Ana simply … vanishes.

Besotted, Jack returns to Hong Kong determined to find Ana. He must hide his anguish from his fiancée, Violet, a beautiful and paranoid Hong Kong socialite, as she begins her lavish wedding plans. As the Japanese army advances, a tragedy unfolds, encompassing the passion and destruction of humans clinging to their dreams as the only world they know changes around them.

Half a century later, a young woman lives with a hidden shame. Jardine Woo is a modern Chinese girl who makes a living jumping out of party cakes, but under her cheerful exterior lies a secret: her mother was a Jane Doe, struck dead on a Hong Kong street nearly thirty years earlier, her infant daughter in her arms. Grown up now, Jardine has adjusted to life with no family—or so she thinks. Then, the extraordinary occurs, and her world will change in the blink of an eye. Algernon Worthing, an Englishman on his deathbed, claims not only that he knows her, but also that she is inextricably connected to a long-hidden crime that occurred before she was even born.

In her years living in China, Japan, and the United Kingdom, Serbian-born Milena Banks experienced the fascinating nuances of multiculturalism. She observed how the perspective of race, politics, manners, and gender colored relations—enriching, muddling, and deepening human understanding. Riding the Tiger is the culmination of those experiences. She currently lives on a horse farm in Maine with her husband.