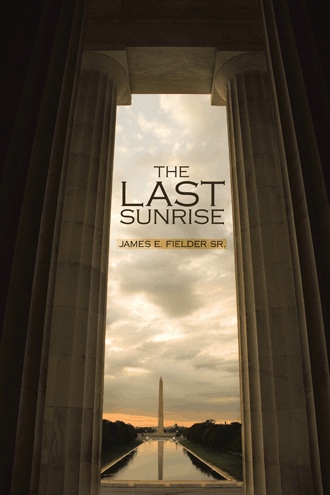 Springfield, Missouri: Jared Faraday, southwest Missouri multi-millionaire businessman with a political-trends hobby bordering on obsession, is very concerned about what he is seeing on the news and the Internet, so much so that he warns his family and friends.

They are all correct.

“The Last Sunrise” is a possible future. The elements are already in place.

James E. Fielder Sr., a highway designer and home builder born and raised in Springfield MO, was an avid reader of science fiction who enjoyed projecting “possible futures” and engaging in lively conversations about many topics such as the space program, politics, future trends, and the afterlife. He was a motorcyclist, a bowler, and very concerned about the future of the planet. He passed on in February 2010 in Colorado Springs, Colorado where he lived in the shadow of Cheyenne Mountain. He leaves behind his wife Virginia, sister Norma, daughter Denise, sons Jim Jr. and Ed, and several grandkids and great grandkids. This is his first book.

Denise F. Sphar is James Fielder’s daughter. She also enjoys science fiction as well as many other fiction and nonfiction genres. She is an artist, recently retired from government service, and currently lives in south-central Missouri with her husband Richard, where they run a canoe livery business and river service on the Big Piney River. They have two Weimaraners, Susie and Ranger.