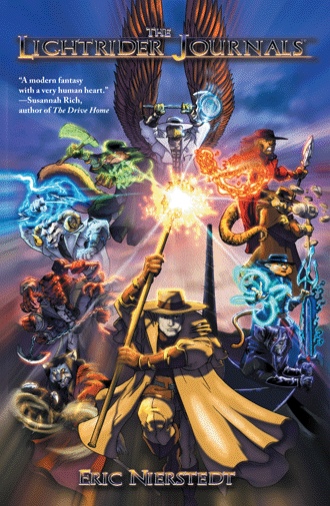 He stared at the leather-bound book that lay on the table, as the colors danced beyond the window above it. Though his eyes stared at the book, his mind saw the outside perfectly.   There he saw reds and yellows and blacks flash across the skies outside his home, a drunken man’s view of a kaleidoscope. It was so unlike the plain blue skies of his birth world; he remembered that when he’d first come to this place, the skies alone had entranced him for hours.  Now, he barely remember the amazement that hat bound him.

But the work was still there. It had dominated his life long enough to kill the joys he’d once felt at the things he witnessed here, along with so much else.   Now, as he stayed in this home, this prison, his duty was all that kept him alive.
Duty walked the hallways with him, took notes with him from the books, and blocked him from the doorways that led out.  But it was not one of those doors that he wanted open.  He wanted a door that would open onto his old life, the one his duty had taken and still kept from him.

Duty.  God, he had grown to hate the very word.  After all these years and betrayals, he no longer knew what it meant.  For hate it all he might, he knew that the joys duty had brought him would always be there.  The tidal waves he’d held back, the broken bodies he’d been able to heal, the demons he’d banished to hell, all could be laid at duty’s feet.

That was why he had taken the book once again. When he’d looked at it, with its bare, unadorned cover and yellowing pages, he’d set it aside, thinking it unimportant.  Now, in its pages, he thought he might find understanding of all that had brought him here.  He knew what that would cost him.  It had been so long since he had allowed the past to truly wash over him, to bathe in it’s scalding waters.  What else was he to do?

Slowly, he walked over to the desk.  He waved his hand, and a chair blinked into existence in front it.  He sat and waved his hand again, calling a small jar of ink to appear on the table, a white feather emerging from its open lid.  He reached over and opened the book, seeing the empty pages, their blank eyes waiting to be colored by the ink of his words.  Thinking on the metaphor, he was reminded again of what his duty had taken from him, as he ran his hand across his face.  He had not seen it since he’d long ago hidden away the mirrors of this place.

He let his mind drift, turning back to those early days, until finally, it came to that one day, the one that would allow him to dip back into the past again.  He smiled, as he dipped his pen and began to write as he remembered.   It had been just a simple Sunday that began with him lying in bed.   He’d stretched, twisting his arms above his head, then turned to look at his wife.  She’d been lying there, the sunlight outlining every crevice of her face.  She’d slept on her side, and had drawn her hands under her head like a child.  He paused his writing a moment, to take in the memory of her face.  God, she’d looked so sweet and beautiful.  As he began writing again he remembered he’d just turned on his side and looked at her, watching her breathe in and out.

That is, until he’d felt something come down on him and knock all his air out, laughing all the while.  As his wife began to wake up next to him, he’d grabbed his son and threw him on the bed, laughing with him as he bounced.  Of course, that didn’t stop the boy from grabbing a pillow and trying to beat him with it.  As always, his dad dodged his attack and managed to take him down with a precise tickle.  He would’ve made him suffer a bit more, if the boy’s mother hadn’t asked if they could prove that they were indeed human beings, and not some mutant breed of Tasmanian devil.  It was at that point that he and his fellow Tasmanian combined forces and turned on her.

Eventually, they had been able to stop long enough for him to go and make his specialty of just-add-water pancakes for brunch.  After that, he’d spent the day doing all the things that he sacrificed weekly to keep the cash flow going- watching baseball on the tube, discussing his son’s schoolwork and life, and playing football together in the back yard. That was also where he’d remembered that his wife could hit quite hard when she wanted to.   He’d watched his son cheer on the White Sox, and he’d seen his wife root for the Angels, just to annoy him.  Finally they’d put their son to bed, and had gone under their own covers and engaged in love that had had him saluting her in so many different and soul-dirtying ways, he’d gone to his wallet to pay her (she’d responded by hitting him with a pillow).  They’d fallen asleep with her head on his chest, just remembering to set their alarm for the next day.

He stopped then, holding the pen above the paper.  It had been so ordinary, and yet, so joyful.  He couldn’t have imagined how things would change so much that a simple day with the family he’d never see again would prove to be the happiest day of his life.   But that was what happened when a man died, he wrote, as the words flashed through his mind.  And if such a man was like him, and made it past being dead… 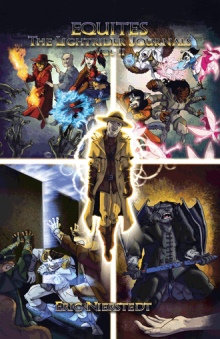 Joseph Hashimoto is happy with his ordinary life. A man who believes in fairness and just action, Joe’s greatest love is his family. But as he moves about his days, he is completely unaware that his actions are carefully observed. With one momentous decision, Joe’s ordinary life is about to transform into an extraordinary existence.

While attempting to save a little girl from danger, Joe is killed in a violent explosion. Instead of dying, however, his soul is brought before the elemental Architects of the Universe, who tell him he has been chosen for a sacred duty. Reborn as Lightrider, the earthly representative of Light, Joe is given leadership of the Elemental Knights, a group of half-man, half-animal beings. Charged with maintaining a delicate balance between good and evil, Joe must police both sides and destroy anyone who threatens to ruin it. As Joe struggles with his conflicting emotions and longing for home, he must face his greatest threat—the ancient Chaos Demons.

In this fantasy tale, a man inadvertently thrust into a world of cosmic forces must come to terms with change and accept what needs to be done for the good of all.

Eric Nierstedt graduated from Kean University with a bachelor's degree in English. In 2011, his work was selected for the Unlimited Potential Theatre Production's NJ Wordsmith Competition. He writes professionally for the online magazine Suite101, the Westfield Leader newspaper, and his blog, ThePopCultureMark. Eric lives in Garwood, New Jersey.