Finding My Way to Precision Journalism 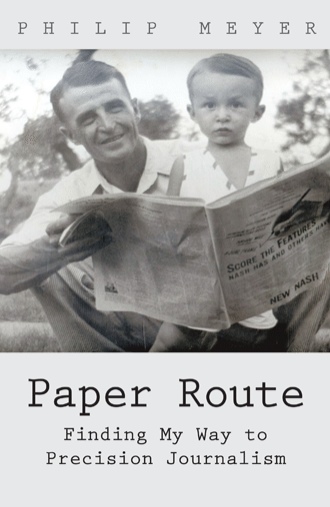 At interdisciplinary faculty gatherings, the conversation often led to comparisons of research interests. When I mentioned mine – and the title of my first book -- there was, more than once, a witty response.

Once, to break the tension, someone asked what else I had written, and I had to purse my lips and say:

My last academic book was about fixing the broken business model of daily newspapers, and I was tempted to call it “Profitable Journalism,” thus establishing an oxymoron trilogy. But my publisher talked me out of it.

Such are the risks one takes when trying to be an innovator. I was an early adopter of scientific method applied to reporting the news. Bad idea, I was told at the time. A reporter should ask scientists about their results, not try to use their methods to make conclusions on his or her own. But computers and statistical software were making it easier, and I did not have to step too far outside the box to see the possibilities for journalism.

Thinking outside the box is easier when you have lived there. Digging into family history late in life, I discovered that I come from a long line of outsiders. My Swiss ancestors were members of a tiny and unpopular religious sect called the Antonianers, after their leader Anton Unternaehrer, who died in a Lucerne prison in 1823. They were antinomians, a rare subset of Protestants who believe that accepting Christ as one’s savior takes all the pressure away from any need to follow rules, either God’s or man’s. Jesus was a fixer, and you could do whatever you wanted. They liked to cite Saint Paul, who said in his first letter to the Corinthians, “The spiritual man judges all things, but is himself to be judged by no one.”

Antinomianism appeared around the time of the Reformation, encouraged by some of Martin Luther’s unguarded reflections, and it surfaced in America in the Massachusetts Bay Colony. Anne Hutchinson led a rising merchant class that wanted freedom to pursue its economic interests, unfettered by civil and religious authority. I’m not sure why it gained traction in Switzerland in the early 19th century, but the disruption of the Industrial Revolution surely had something do with it. My people were farmers, who prized their independence. The industrial system demanded coordination and regimentation to enable production on a large scale.

There is little evidence that observing Unternaehrer’s creed led to a great deal of risqué behavior by my Meyer ancestors, although the meticulous records kept by the Swiss show that my great-grandparents, Heinrich and Regula Meyer, were first cousins and that their firstborn arrived two months after their 1843 marriage in Zurich. They named the child after his father, and Henry Meyer Jr., as he became known in this country, was the first of his immediate family to abandon Switzerland for America. He reached Kansas in 1863. Heinrich and Regula followed him to Kansas a year later with their remaining children, including seven-year-old Jacob, who became my grandfather.

In the USA, the Meyers left no sign of their antinomianism. They joined congregations of the Evangelical Association of North America, founded to serve German-speaking Protestants, and followed a pietistic path, free of drinking, dancing, swearing, or violations of the Sabbath. My grandfather would risk crop failure rather than harvest on a Sunday, even if a destructive storm was approaching. He figured the Lord would provide.

The outsider role was apparently more situational than genetic, but accidents of time and geography would, at least in my case, reinforce that sense of otherness. For a journalist, it would prove an advantage.

As author Philip Meyer sat in a college class listening to a professor lecture about systematic tools for measuring things like trust in government, a thought struck him: a journalist could do this!

He thought about the newsroom conversations he’d had about the possibility of reporting on some interesting social phenomena. The group always ended with a shrug and a lament that there was no way to measure it—but he began to wonder.

It was an epiphany for Meyer, who went on to report on the 1967 racial riots in Detroit and write the groundbreaking book Precision Journalism. While others were arguing that reporters should not use scientific methods to make conclusions of their own, Meyer was using computers and statistical software to elevate the standards of traditional journalism.

At age fifty, he switched gears and entered the world of academe, where he continues to stir the pot. In Paper Route, he recalls two interconnected careers and examines how journalism, quantitative methods, and original thinking led him to live the remarkable life that he’s still enjoying.

Philip Meyer is a former newspaperman who became a distinguished professor. His 1973 book, Precision Journalism, was the outcome of his work with the Pulitzer Prize–winning Detroit Free Press staff on the 1967 Detroit riots. It is still a guide for journalists who report on disruptive social movements. He currently lives in North Carolina.