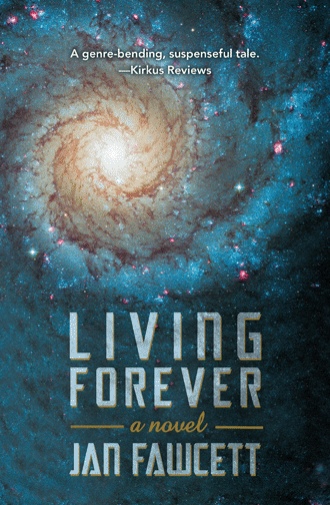 Ian apologized for having blown-off Dr. Carlson’s previous chemotherapy recommendation and asked about his status. Carlson graciously stated that she had heard from Caitlin about their marvelous trip. She looked toward her fellows who handed her the mini-computer with his laboratory results. “Your lungs are quite compromised, your liver is full of metastases and your ammonia level is increased along with the rest of your liver function tests. You have quite a bit in your lumbar spine, but nothing in your brain.” Ian moved and felt the lower back pain…

The DARPA agents clearly appreciated Ian’s alertness, but remained very focused. “Dr. Farrell, we are here to ask you to volunteer to have your mind transferred to an electronic bio-chip. Our experience with it - called Project Phoenix - is that it will end your life, but we believe it will allow your consciousness to exist on the chip…

Lightness. Floating. Is this Heaven? Fusion with all, an oceanic sensation – pure aperçu. Nothing but now in a vibrant, light-filled void. Slowly, it turns dark, black. No touch, no sound, no smell. A sense of self slowly dawns like a picture emerging from a developing tray. Ecstasy morphs into terror, darkness, isolation. No up, no down, buried alive?

I need to gasp.

Am I dead? Does consciousness go on after death?

But I can think. How can that be?

I could be psychotic with fear now.

I focus on slow breathing, even if I have no breath.

I can think. What else do I have?

“Dr. Farrell, it’s not Major Picatta. This is Chi MacDonald. I’m the scientist who developed the transfer procedure. They don’t know I’m contacting you.-I know it must be hard to understand. I’m the physicist who developed the technology in animals that they used for your transfer. I designed a hidden channel for communication with whoever ended up on this chip. I realized how lonely and terrifying this could be for anyone, and I felt responsible.”

She paused. “You need to know that Dr. Farrell did not die. He recovered his mental function even though the transfer procedure had made a complete copy of his mind.”

Ian-l lives, and Caitlin has lost nobody.

Does she know about me, the copy, Chi?

“No, that’s classified at the moment. The reason they can’t produce her for you is that she doesn’t know you exist, and they don’t want her to know.”

I’m not Ian anymore, Chi. I can’t take being Ian. I’ve thought about it, and I’m changing my name to Sunyata. Full solid emptiness. That’s me. Do you understand why?...

“Hello, I am Magna, I have been sent to join you and improve your mind.”

Sunyata was taken aback to say the least. A damn computer that thinks it’s a person? That’s off the charts!

Magna answered his thought. “Maybe you are a bit surprised that I have an identity, but when they make you this intelligent, this is what happens.”

I’ve got to try to remember who I was when our lives diverged. I have no idea how much worldly time has elapsed. What will I say when he asks me what I’ve been doing? I’ve been trying to survive, access positive memories, meditate, falling in love with Chi, and having sexual fantasies and feelings without any body…

There it was, a modern pyramid, 20 stories tall, with a cluster of five huge, mounted rockets, 10 football fields in length. It came to a sharp point, about 10 feet long that was solid electronics - the brain of Time Jumper. An old-fashioned cockpit was painted on the needle-shaped lead rocket, with the words ‘Major Ian Farrell’ painted along the side. Major Farrell was presented to the world as the “pilot” who would faithfully relay back information during the trip.

That area with the name on the side was where, the chip was embedded, Major Farrell, aka Sunyata, was to be placed for the grand voyage. The system was expected to attain speeds faster than light, a feat deemed impossible, until very recently.

Chi, when you make the transfer, who will be in charge of the Hucomm project?

“It will be Caitlin, Skip and their team – of course.”

Chi - I’ve been thinking about my hasty proposal.

“You mean my joining you on the chip?”

Yes, I’ve been thinking how selfish it was for me to push that.

So easily could one imagine this story infused with the rich detail of character, setting, and motivation that would transform it into a memorable work of brilliant insight. —Clarion Review

Throughout this compelling story, Fawcett makes fascinating inquiries about life, evolution and the true nature of man, proving that with all of our technology, the human mind still remains the most powerful and mysterious tool. —Kirkus Review

Faced with imminent death after a grim cancer diagnosis, sixty-eight-year-old Dr. Ian Farrell decides that he and his wife, Caitlin, should live life fully and appreciate every moment he has left together. After Ian and Caitlin return to Chicago from a spontaneous trip to Santa Fe, Ian has no idea that he will soon have a tempting carrot dangled in front of his nose: the chance to live forever.

When Ian lands back in the hospital for more tests, two agents from a governmental research agency ask him to submit to an attempted transfer of his mind to an electronic chip. With very little time left to live, Ian accepts. He flies to Project Phoenix the next day with Caitlin and Colonel “Wild Bill” Clausen, the head of Project Phoenix. After he bids his wife good-bye, Ian swears his allegiance to the United States, lies on a table, and heads into the bowels of a machine that will change his destiny forever.

In this intriguing novel, a dying man now left with nothing but his consciousness must create a new identity and partner with a brilliant neurophysicist in order to save humankind from a destructive technology.

Jan Fawcett has spent his life treating patients, teaching, and conducting research aimed at improving treatment for depression and preventing suicide. After he was diagnosed with malignant melanoma, he had an epiphany that led him to decide not to wait until he was dying to do what he wanted to do. He currently lives in New Mexico.