A Memoir of a Beautiful Life 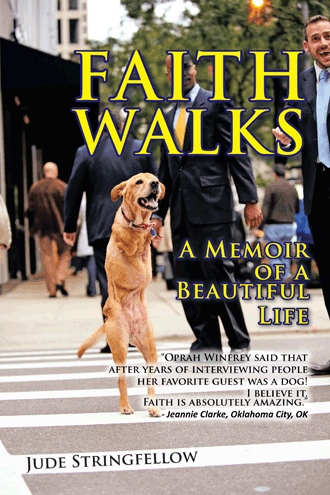 “Hoorah!” - Faith She's a United States Army E5 Sgt. The Marines call themselves "Devil Dogs", but Faith is not a Marine. It's not that she minds the Marines, or thinks any different of them when she makes a hospital or base visit. All wounded warriors look the same to Faith, they’re simply beautiful. However, and/or but, Faith is Army Strong and she’s Army Strong for a reason. Sometimes when Faith is wearing her camoflagued custom made ACU jacket made especially for her by First Sgt. Jason Davis of Ft. Bragg, she can see more clearly walking through airports on her way to see the soldiers. Something about wearing her uniform makes the dog stand a little taller, and maybe skip a little faster. So many times someone will see her and shout of "Semper Fi!", which in Marine talk means "Hey I'm one too!" Faith just smiles, wags her tail and tries as hard as she can to get to them so she can share a minute with someone she knows will understand her mission. Marines, Army, Air Force, Navy, Coast Guard, National Guards, we're all on the same team. Faith even understands the need for nicknames and a bit of the teasing - - after all, she calls her friends in the Navy "Squids" and they don't mind. She says it with a happy dog smile. Standing 37 inches tall, Faith just happens to probably be one of the tallest dogs in the Armed Forces and that's something she can walk proudly knowing forever! Unlike other dogs in the services Faith is fully capable of standing on her own two feet and going just about anywhere she pleases without any argument from the Brass! In fact, in many cases it's the BRASS that calls her and me to come out to see them at the many bases she's visited! Visiting bases and hospitals especially, is what Faith was made for. If she can spend a little time sitting on the laps of a wounded or depressed soldier, she's made a dint in the overall horrendous assignment this country has to take care of our returning vets. Faith has been seen loving on and lying next to some of the bravest men and women this country will ever know. She's been saluted by Generals, and given several com-memorable coins and medals - - in fact, CoinForce, Inc., the company that makes these com-memorable coins actually produced a com-memorable coin to honor Faith's work in the military. I’ve added a photo of it here! The coin is to be given out by us to any and all who have helped Faith's journey become a reality, and for those who just need a little extra push to make their goal. For the makers of these coins at CoinForce, Inc., making Faith's coin is not only rare, it's a first! Dogs don’t ordinarily get their own coin.

For all accounts and purposes the life of one dog shouldn't make that much of a difference, but this life did. Faith's life began without hope and without love. Having been rescued by Reuben Stringfellow at the age of three weeks, Faith's life took a dramatic turn. Completely unable to function as a normal dog, it was up to the Stringfellow family to create in Faith a means to function as best she could. This is the definitive book on the life of Faith the Dog. Her life story is one for the history books. In fact, her story appears in scholastic text books in several countries! Courage, perseverance, dogged-determination, and a generally great disposition is what it took for Faith to become who and what she is today: "A Modern Day Miracle".

Jude Stringfellow holds a PhD (ABD) in Administration of Higher Education and has been an English professor for several years. Her current passion is writing, traveling with Faith, and speaking at military and non-military events to spread a message of positive empowerment through taking positive action. She lives in Indiana with her family.