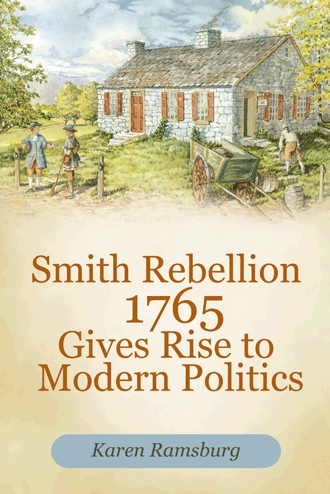 America needs to open its eyes to our coin operated political system. After thirty years we have had declining middle class income, rising unemployment, failing schools, a failing healthcare system and an increasingly changing climate. In thirty years the American Dream has gone from everyone's aspiration to a cruel myth. This was not created by big or small government, by Republicans or Democrats; it was created by the short sighted belief that profits were more important than people. We live very near the Pre Revolutionary War frontier and it was here, not Boston where the themes that created our nation began. We need to return to the spirit of William and James Smith and the Sideling Hill Volunteers who believed that all men were created equal and that all men had the right to defend themselves. Today this means defending ourselves from the national economic suicide called global free trade.

Eight years before the Boston Tea Party and ten years before Lexington and Concord, the first shots in the American Revolution were fired in Mercersburg, Pennsylvania, in 1765. Known as the Smith Rebellion, this crucial turning point in American history set the stage for modern American politics.

In this history, author Karen Ramsburg tells the enlightening story of this uprising on the Pennsylvania frontier and definitively shows how it laid the groundwork for the political maneuverings of today. Ramsburg dips back into history and reveals how a simple act of self-defense became the spark that created our nation and developed the first battle in a long, continuous class war still ongoing today.

Fearful that illegal trade goods, such as tomahawks, scalping knives, and gun powder, were being transported to Fort Pitt to rearm the Indians and renew Pontiac’s War against the frontiersmen, Justice William Smith and his cousin James Smith, a.k.a. Black Boy Jimmy, believed they had a right to stop it. The ensuing rebellion led to a definition of government as a contract between all men to reject some of their natural rights in favor of a framework that would secure each man’s rights to life, liberty, and property.

As a nurse, activist, and mother, Karen Ramsburg became interested in history while trying to save the Justice William Smith house in Mercersburg, Pennsylvania. She is running as an Independent candidate for Congress in Pennsylvania’s Ninth Congressional District in the 2012 election. Ramsburg was born in Frederick, Maryland, and resides in Mercersburg.