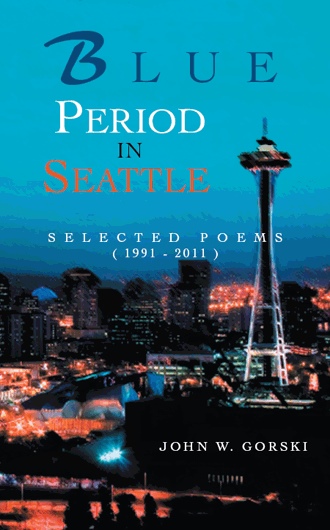 John Gorski’s Blue Period in Seattle traffics in a play of atmosphere, both meteorological and psychological. These atmospheres evoke a kind of emotional synesthesia: “I get off the bus/ at 64th and Linden/ because the dark organ chords of alcohol laughter/ are playing out of tune.” Blue Period in Seattle dares us to partake of a fretted, penumbral world, haunted by muses who are alternately flushed from “the rose pink immanence /of the morning horizon” and morbidly pale: “her pre-Raphaelite face—a lunar masque /advancing out of the night.” It is not surprising that Gorski is drawn to the lives of the artists, and to their “progenitor” muses. These artists record their findings and, in the process, see what others tend to overlook. Fascinated by artists in their old age and even decrepitude, Gorski seems to be asking himself what the upshot of such a vocation, finally, turns out to be—what, in short, are the wages of art? Yet in other poems, such as the “The Five-Year-Old Sheriff,” Gorski’s droll side reigns, as the mood strikes. All in all, Blue Period in Seattle represents a particularly fertile moment in Gorski’s oeuvre. For those as yet unfamiliar with his work, it’s a great place to start. -Deborah Woodard, author of Plato’s Bad Horse

John Gorski has a B.A. in English Literature from the University of Cincinnati. He has studied poetry writing at the University of Washington Extension and the Richard Hugo House in Seattle. He grew up primarily in Maryland and Ohio and has lived in Seattle since 1976.