Pie in the Sky

How Joe Hill’s Lawyers Lost His Case, Got Him Shot, and Were Disbarred 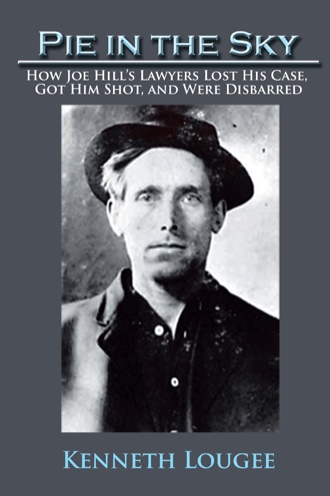 The labor songwriter Joe Hill was executed by the State of Utah in November 1915. His songs continue to be sung by the labor movement. The labor movement continues to believe that Joe Hill was framed on a murder charge. This is a trial story. There cannot be a trial story without lawyers. There cannot be a 1914 Utah trail story without Mormons. Neither history nor law is sufficient to determine actual guilt or innocence of Joe Hill but using materials now available we can discern trial error and anti-Mormon prejudice. Trial Advocacy and Mormon history are a better guide that class consciousness to the Joe Hill trial result. They are a sufficient explanation of the Joe Hill's conviction and execution. The trial lawyers,previously unknown to writers about Joe Hilll, had very little experience and made the errors of new lawyers. The foreman of the jury was the son of a Mormon apostle and the son-in-law of a second apostle. His identity has been previously lost to writers about the case and his influence of the rest of the jury has never been discussed. The trial lawyers were socialists and acted in disregard of the Mormon jurors and the Mormon perceptions of Joe Hill. Joe Hill's last lawyer, Judge Orin Hilton, knowingly antagonized Chief Justice Straup of the Utah Supreme Court. He further antagonized the Mormon community through anti-Mormon rants. None of the justices on the supreme court had ever been Mormon including Justice Straup who was a Unitarian. Judge Hilton's rant claiming undue influence on the court by the Mormon church offended the none Mormon court system as well as Utah Mormons. This anti-Mormon rant led to Judge Hilton's disbarment by the court. The Joe Hill case is a story of labor, management,lawyers, judges, Mormons, non-Mormons, and Masons. It is the story of labor law and trial procedure. Lawyers must deal with community in which the legal proceedings occur. All Utah groups were prejudiced and their prejudice played its part in this tragedy. Without privileging any view by the disparate groups, this book explains Joe Hill's conviction and the failure of post-trial proceedings.

It could be said that the Joe Hill murder trial rates as one of the most important trials in Utah’s history. Hill, a prolific Labor Union songwriter, was accused of murdering a Salt Lake City shopkeeper and his son during a robbery in 1914. In Pie in the Sky, author and trial lawyer Kenneth Lougee analyzes this case and explains the errors that were committed during the trial, which resulted in Hill’s guilty verdict and subsequent execution. Interested in more than Hill’s guilt or innocence, Lougee provides a thorough discussion of the case—including Hill’s background with the Industrial Workers of the World, the political and religious climate in Utah at the time, the particulars of the trial, and the failings of the legal process. In this analysis, Lougee focuses on those involved in the trial, most especially the lawyers, which he describes in the text as “the worst pieces of lawyering of all time.” Pie in the Sky presents a breakdown of this case from a lawyer’s perspective and shows why this trial is still a matter of interest in the twenty-first century.