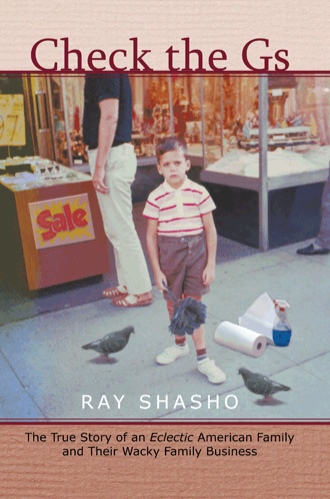 At an age when most kids are just getting rid of the training wheels on their bicycle, Ray Shasho entered into a crazy world of secret lingo and bullying sales tactics at the Chin Lung Art Gallery, his father’s retail store on the corner of Thirteenth and F Street in Washington, DC. Check the Gs is the true story of how this bizarre family business changed his world forever.

Raised by a Cuban Catholic mother and Syrian Jewish father, Shasho made his first sale at the age of six and never looked back. Life in the family business (and in the Shasho family) was never boring. From FBI interrogations to angry mobs, each new day at the Chin Lung Art Gallery brought with it new adventures.

Check the Gs tells a story for everyone who is proud of their family and heritage but not afraid to laugh at its many eccentricities, and for anyone who has ever worked in retail and experienced its humorous situations and misadventures.

At the age of six years old, Ray Shasho began learning, in a most unconventional way, about the ‘art of selling’ at his father’s retail store in Washington D.C., and although the store was called ‘Chin Lung Art Gallery,’ it was predominately a retail electronics/souvenir store, and nobody that worked there was of Chinese heritage. Ray left the family business to attend a CBS owned broadcasting school in Ft Lauderdale, Florida. After graduating, Ray became a deejay, while known as ‘Ray Richards’ across the airwaves on several popular Top 40 Radio stations. After his stint in radio, Shasho became an entrepreneur in electronics. Ray opened his own cutting-edge retail electronic businesses inside the JW Marriott hotel lobby on Pennsylvania Avenue in Washington, DC. Since the age of six, Shasho had witnessed all the technological advancements firsthand and how it affected the consumer and the music industry, from early transistor radios, record players, reel to reel tape recorders, cassette and eight track tape players, walkmans, CD players to MP3’s. Some of Ray’s clients included … Politicians, Ambassadors, National Press clients, and celebrities such as … Chuck Norris, James Mason, Ted Williams, Alex Haley, Art Buchwald, Dick Gregory, Dionne Warwick, John Candy, Jon Voight and General Colin Powell. Seven years later, and during a horrendous recession, Shasho opened a full-service Dry-Cleaning plant in Prince Frederick, Maryland. One of Ray’s favorite customers was Author Tom Clancy. After he sold the business, Ray entered the financial world, becoming a branch manager, commercial and mortgage lender with four of the largest banks in the U.S. Thirteen years later, frustrated with the corporate world and dealing with one of the worst recessions in our country’s history, Shasho decided to begin writing about his wild and crazy experiences of working in the family business. After releasing his first novel …Shasho became a freelance music journalist covering concerts and music events around the Tampa Bay area. He then decided to take a crack at interviewing some of the rock music legends that he idolized all of his life. To date, Ray has interviewed over 150 music legends and is featured on music artist’s websites worldwide. Shasho’s next book will discuss the state of the music industry and spotlight all the music legends he has interviewed over the past five years. Ray has been happily married to his wife Sharon for 32 years; he has two children and is a new Grandpa.