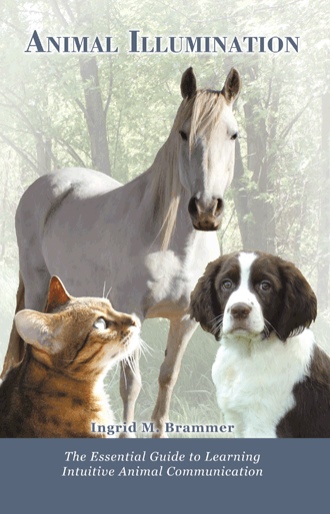 I was patiently awaiting the birth of our first foal, sleeping in the barn not to miss the moment. I was grateful to witness the whole event and be there for my mare should she need any help. It went flawlessly and we had our first little colt. It took less than an hour for Galeon to find his wobbly legs and make his way over to me sitting in a lawn chair at the opening of the stall door. He slowly raised his head to smell my face and proceeded to try to find a drink of milk on my ear lobe. From that moment I was in love! For the next 4 years Galeon and I have continued to have a strong link and he looks to me for guidance and comfort when scary situations appear, like the tractor that was moved a few feet over from where it was yesterday. I hear his thoughts very clearly and can respond to settle him down.

In the summer of 2010, as a 4 year old it was Galeon’s big day to go off to training and learn to be under saddle. It was a big moment for him as he needed to learn how to load and travel on the trailer and be away from his herd and family. I helped to prepare his mind by talking to him and explaining what was going to happen and what to expect.

I told him that he was going away for a couple of months to learn how to work like his Dad. He was going to come back home once he was fully trained and I was not abandoning him as he was being entrusted to someone that he already knew, a natural horsemanship professional Annie Lalande.

I told him to make me very proud and to listen and learn from Annie as she had much to teach him. Once we arrived at the farm I introduced him to some of the other horses including 2 he had known from the past and explained how and when he knew them.

The next day I went to visit to reinforce I had not abandoned him and to see how he settled in. He was in the single paddock in the back of the arena by himself with the gelding herd on one side of the fence and the mare herd on the other. He stood looking at the mares to be as close to them as possible. I asked him if he had met the boys on the other side and if he wanted to introduce them to me. He turned before I could make a movement and started to lead me over to the boys’ side. They all came over and everyone smelled noses and I explained to him that he was going to be in with them in a day or two. He had a huge sigh, then a snort of release and with tension relieved began grazing alongside the fence.

During the week I tuned in from home several times to see how he was doing. The first thoughts were very clear as he was telling me “You would be so proud of me Mom. I started working and I am learning very quickly”. I went to visit him a few days later and watched him work and Annie said to me “I am very proud of him, he is learning very quickly.” She also mentioned that he has such beautiful movement. After the lesson Annie and I were brushing Galeon and I was telling her the story of his Dad, Diestro and how he would take care of me and keep me safe in the winter when the ice came off the arena roof. You will read more on that story later in the book. Little did I know Galeon was listening to our full conversation as the next example clearly shows.

One of my students and very good friend Sarah had asked me how Galeon was doing. Telling her nothing, I instead asked her to tune in and talk to him and see what he tells her. Here is the result:

“As soon as I tuned into him his head popped up and he spun around like he is so happy to be talking to me, like an excited little boy! He tells me he is a big boy now, he’s proud to be learning and training and he can’t believe what he can do and how much he is learning. He wonders if I know that he’s away from his Mom for the first time, like far away for the first time, he is thinking about his friends but he knows he’s coming back. He can’t wait to show off what he has learned, he says he is beautiful and he feels like he can float, he wants to show off what he knows and what he has learned. He’s like a little boy that is all excited to go to school for the first time and is all dressed up and proud of himself... he’s feeling really good. He also made me believe that he wants to be your horse, he wants you to ride him and he will take care of you. He wants to prove to you that he can do it and he will take care of you, he just kept saying that he would take care of you if you ride him.”

The next day Sarah wrote me again with the following update:

“I was sitting at home and kept getting side tracked with questions from Galeon... it was very strange, it was like he wouldn’t let me work (can I ask you something, can I talk to you for a minute). He’s worried about the saddle and the rider part; he doesn’t know what to do. I explained it all to him and what he needs to do and just to worry about keeping his balance and keeping all 4 feet on the ground. Strange but he seemed to be asking me if I could run through it with him and explain it to him. He seems to be nervous about getting a person up there and what it is going to feel like, what will he do... so very strange that he just kept coming through so strong for about 5 minutes... he’s thanking me now!”

I realized I was so worried with him leaving the farm that I didn’t even explain anything about the saddle and what to expect. I was glad Sarah was there to help him through it.

Helping your animals through change starts with the knowing that they can understand us and that they look to us for guidance and explanation. Change is scary for all living beings and with a little upfront explanation it can help take some of the stress out of the situation.

This is just one of the many possibilities that having an understanding of the fundamental aspects of animal communication can lead to. We will explore how this is possible, alongside examples and through practice provide you the fundamentals to get you on your journey.

Animal Illumination: The Essential Guide to Learning Intuitive Animal Communication takes the mystery out of animal communication and provides practical, easy-to-understand instructions on how to communicate telepathically with your pets. International animal communicator Ingrid M. Brammer guides you through a series of communication exercises developed and honed throughout her career as a mentor and instructor. Brammer’s methods transcend the boundaries of typical human/animal relationships, allowing you to create a new and profound channel between you and your beloved pet.

Animal Illumination is an indispensible tool for any animal lover:

With the help of the advice in this guide, you too can create a long and fulfilling life with your pets.