As Coframed by Behavioural and Psychological Universalisms 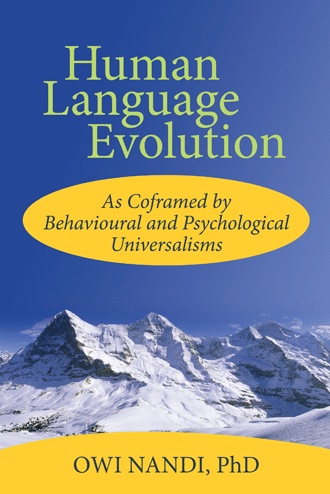 Simple linguistic sounds may have evolved from human facial expressions. Facial expressions as reactions to emotions are found in apes (Pongidae) and humans (Hominidae), especially in the region of the mouth. They seem to be a first step towards very few linguistic sounds. Thus, these mimic expressions, including those of the lips, the mouth, and the tongue, could have been standardized into simple sounds. If this evolution from facial expressions to linguistic sounds covers the whole process of language origin, a similar process could also have arisen several times independently in mankind. For example, the expression for fear as a tense opening of the rounded lips that then widen and expose the frontal teeth, trasitioning to the well-known “Furchtgrinsen” (an established reaction to fear in mammalian ethology that in humans is accompanied by the uaa sound) may give rise to a primitive word like wuah as a flexible particle signifying fear. In fact, as I show in the current work, languages of a diverse array of large language phyla possess words that seem to be derived from this uaa sound.

Human speech is one of the most fascinating realms of study on earth, and the diversity of languages is overwhelming. In Human Language Evolution, author Dr. Owi Nandi explores the results of his long-term study delving into the origin of spoken language and his search for common patterns among all language families.

In an effort to compare and connect recent developments in linguistics and in the study of human evolution via genomic sequencing, Nandi’s study shows how various languages use similar sounds for words with similar meanings. It also demonstrates that these similarities may have evolved from human facial expressions caused by emotions like fear, alertness, joy, pleasure, or pain. Covering thirty-four world languages, Nandi discusses the psychological background of an array of words—such as counting, evil, hurting, scratching, coughing, thinking, father—and compares those among other languages.

Seasoned with notes on psychological backgrounds, Human Language Evolution provides rich insight into the whys of universally conserved linguistic patterns in light of the 170,000-year history of modern mankind, transcending the reaches of traditional etymology.

Owi Nandi received his PhD in science in 1998 from the University of Zürich, Switzerland. He published several in-depth scientific articles on plant biology, plant systematics, and plant biochemistry. Linguistics and etymology was a long beloved and stubbornly pursued secondary discipline in Nandi’s high-school and university career. He has an active knowledge of at least thirty languages, while speaking eight of them more fluently. Owi Nandi is member of the well-known Association of the World’s long range etymologists, ASLIP, Association for the Study of Language in Prehistory.