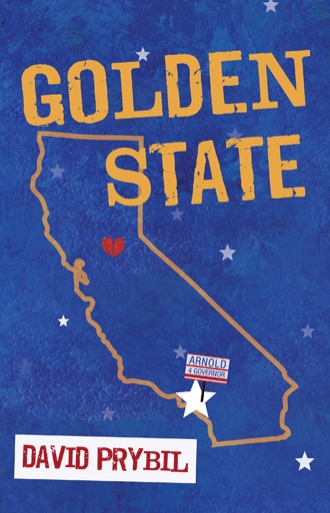 On a late-night talk show in the fall of 2003, Arnold Schwarzenegger announces his candidacy for Governor of California. Two months later, he wins, despite having no qualifications for the job beyond playing a hero on screen.

With Arnold’s rapid rise to power as a seductive backdrop, Golden State follows a disparate quartet of characters in the capital city of Sacramento as they feed off this anything-goes atmosphere and undertake a variety of misbegotten schemes of their own, all in pursuit of this same kind of validation and fulfillment.

There is tightly wound realtor Missy Carver, determined to find Arnold his “Sacramento dream estate” and secure the partnership she’s sure will make her feel complete; Spencer Brine, a depressed obituarist whose star-crossed love for a local stripper provides him the inspiration for an unlikely rise through the paper’s ranks; widower Todd Tisdale, lost in former glories, who pins his hopes for saving his struggling tuxedo shop on befriending Arnold, no matter what it takes; and finally, Rowena Pickett, a directionless tanning salon employee who only wants to find love—even if it’s with a prison pen pal she can’t touch.

As these characters’ lives intersect, often in unexpectedly fateful ways, David Prybil’s darkly humorous work examines both the rough underbelly of dashed hopes and the enduring power of the American Dream.

David Prybil is a writer-producer with fifteen years of experience in the entertainment industry and producing credits on such films as Saved! and Dancer, Texas. A former development executive and production company president, he has a BA from the University of Michigan and a JD/MBA from Indiana University. He lives in Los Angeles, California.