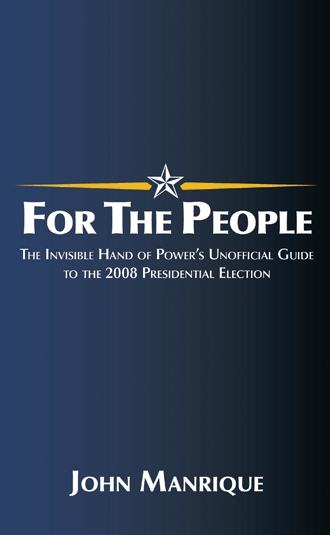 Let me be clear right from the start: I did not write this book for publicity, for the money, or for some kind of mad desire to mind-meld battle with Rachel Maddow (though I totally love-hate her). Such petty desires fall well below my pay grade. As you will soon totally be stoked to find, For the People comes from a higher place. This is not some dime-store pabulum crafted by an Alaskan salmon-spawning media whore, or a public restroom floor reader penned by a googly-eyed delusional man-child who cries and sticks his tongue out for attention. That most definitely is not me.

In fact, I'm so above all that, that the name on the spine isn't even mine. “John Manrique” is nothing but a nom de plume—some hack I randomly plucked from oblivion who once wrote a novel because I guess he thought he could. And now I've bestowed unto this most-undeserving scribbler credit for probably the greatest literary treasure of the new millennium, an amazing tale of selfless courage I know you are totally going to love and passionately be inspired by. No doubt this ghosted writer will end up on Oprah's couch claiming For the People was born of his imagination, or some crap like that, but I don't care. Like I said, that's not what I'm about. May he savor my glorious crumbs while I preserve my identity among the shadows.

Unencumbered by the common man's lust for fame and fortune, the motivation behind sharing my story is simply to keep it real. While "real" isn't something I normally care about from my lofty perch in this world—like the price of milk or Tyra Banks's boobs—I put a lot of work and sacrifice into getting Barack Obama elected. For the sake of all the unseen average American little people my efforts could benefit, it would be a shame to see it all go to waste. It's like that Bible fable about teaching a guy how to fish versus just giving him old cans of Starkist out of your pantry, though I guess I shouldn't expose my foreshadowing so soon. And yes, I know, “That's what she said.”

So we're going to get into all that, and what you do with it is what you do. From where I sit, that's pretty much the moral of the story—it's up to you if you want it to be. But again, let's not get ahead of ourselves.

For now, I just need to provide a bit of background in order for you to understand the truths I'm about to lay down. See, you need context to put all this perspective into, because where I come from you have never been. My world is cloaked in the shadows conspiracy theorists chase, the unseen force that influences most if not all of what you think, believe, and do on a daily basis. What gets dished at our country club potluck is the clandestine power that influences those who believe they wield ultimate authority. The "sovereignty" of our families rises above presidents and kings, far beyond names like Vanderbilt, Rockefeller, and Carnegie. We are untraceable, yet the powers of our persuasion thread the ages. To paraphrase former heavyweight champion Larry Holmes, "The Illuminati couldn't carry our jock strap."

To put it into the vernacular of the street, my grandfather is "The Man." My father is the answer to the age-old question of "Who's your daddy?" Our tribe, it ain't called "Quest." We are "They," you know, the folks responsible for such classics as:

Okay, the last one I just made up, but that's because leather pants on a dude are gay. Seriously. The others, however, were all spawned by the elite fraternity of which I number … or should have if you want to get all technical. I mean, before this whole ball of shit string unwound it was just a matter of me finishing my senior year at the "manipulate the world" preparatory academy, and then I was officially on the roster. The Invisible Hand of Power is like a family business that way.

Which brings up another important point: as a family business, "They" protects its secrets (even those of an old douche bag "Uncle" who thinks he knows everything but really is just a frustrated tyrant with Gomer Pyle hair who suffers from Assheimer's). That means I have taken some liberties with locations, many of the character names are aliases, and some of the action sequences might be toughed up with an embellishment or two. Trust me, though, when I say all the sex stuff happened exactly as described. Exactly.

But that's the artistic license that drives my craft as an "Auteur" (not to mention, the mush minds of the Bruckheimer bourgeoisie need plenty of bang-bang, boom-boom, and booty-booty to hold their attention). For all the intense, verbal pyrotechnics, however, what you're getting here is the story behind the story. This is a glimpse behind the wizard's curtain the masses never see. I'm actually taking a big risk penning this tale—they are already quite unhappy with me, as you will learn—though I believe no pivotal moment in history should go unrecorded when it can further the progress of mankind. Sometimes the Pros just outweigh the Convicts.

For all that pomp, however, the humble truth is that "We" (that would be the superpowerful almighty secret society I hail from) do not direct the course of human events; we merely shape them. Our covert actions provide the inspiration, and while this "motivation" is delivered in a very potent and convincing form, the choice is always yours. "Do what They say or …" Recently, I became curious as to where that "or" might lead, and the result is the story we are about to embark upon.

So, with introductions complete, let us begin. 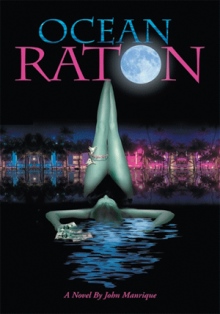 “NYC Prep” meets The Manchurian Candidate in this blistering satire of the 2008 Presidential Election. Voltaire is a child born into ultimate privilege; his family is one of the ruling members of “They,” the invisible hand of power behind mankind’s machinations, as in “They say you need to eat more fruits and vegetables, or donate ten percent of your pay, or believe …”

As young Voltaire prepares to enter manhood and take his place at the table, he finds himself disagreeing with what “They” say about the upcoming US Presidential election. Emboldened by the impetuous confidence of youth and the fresh face of Barack Obama, he decides to do something about it.

The result is a hilarious, uncompromising look at modern society. Religion, gender, race, celebrity, class—nothing is sacred in this sensationalized romp through the incestuous world of American pop-political culture that chronicles an insider’s fanciful interplay with all the characters. From Caribou Barbie to terrorist pals who made the 2008 campaign one for the ages, For the People intersperses real life with fiction—but is it really fiction? While the outcome of the 2008 Presidential election may be known, this surreal journey behind the election, with its many twists and turns, poses real questions for the people to answer about our role and responsibility in it all.

John Manrique, the “alleged” author, is a self-proclaimed social satirist whose work—including his debut novel Ocean Raton—has amused himself and burdened friends and family for years. Prone to delusion, he appropriately lives in South Florida with his wonderful wife and two beautiful children. For more information, visit www.johnmanrique.com.