Homeland Security Warning: Possession of this novel may result in enhanced interrogation. 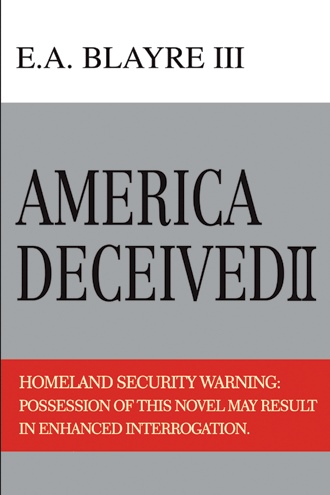 
The CIA agent hung up the phone.
General Barker noticed his sly smile and asked, “Who was that?”
“Ted.”
“What did he want?”
“He asked if that cheating bitch boarded the plane.”
General Barker laughed, “Did you tell him we escorted Barbara to Flight 77, over an hour ago?”
“That’s exactly what I said.”
“Alright, time for serious business then.”
“One and Two are set, ready to go. This building is on standby. Planes go airborne in about an hour.”
“And the evidence?”
“Dropped shithead’s passport near the towers in a place where even the NYPD can find it. Our Mossad friends parked the car at Logan this morning with their luggage.”
“What did you put inside the bags?”
“Koran, videocassettes from a Boeing 767 Flight Simulator, training manuals and a couple martyr tapes. Mossad tossed in a suicide note naming each hijacker.”
“Everything’s in place then. Grab some popcorn and wait for the show to start.”
The CIA agent sat down checking his notes. General Barker hovered over the desk, reviewing various mock exercises planned for the day. The CIA agent’s cell phone rang.
A garbled, double-coded voice on the other end spoke, “Employees of Odigo just received e-mails warning people to stay away from the World Trade Center complex.”
He shook his head, “Yesterday, the stock trades and today this. We haven’t even lifted the curtain and we’re in trouble.”
The encrypted voice said, “Over-riding their computer notification system now. That’s the last message transmitted.”
The CIA agent hung up, “Not good, not good. Too many people involved. Too many competing interests. Too many variables.”
General Barker barely responded as he concentrated on numerous training missions developed by Pentagon Brass to insert phantom airliners, disable NORAD and confuse Air Traffic Controllers. He ordered fighter jets flown away from New York City and Washington D.C.
On a busy day at the Windows on the World restaurant, one-hundred-and-seven floors above ground in the North tower, the owner’s favorite waitress set the breakfast table for her daily patron.
The crimson-jacketed, stuffy concierge grabbed the server by her hand, “Stop setting this table, Larry’s not coming today.”
She jerked her arm away, “Are you sure? He hasn’t missed breakfast since he bought this place.”
“I know. To be honest I thought it was a prank. I nearly called his wife out on it.”
She started setting the place again, “He sits here every day.”
“Not today.”
“I don’t believe you. He’s coming and you’ll thank me for saving both our jobs.”
“I’m telling you, I just spoke to his wife.”
The dressed-up, white trash waitress swept beneath the table, dusted surfaces and wiped off each chair.
“I’m setting him a spot.”
“His wife called, he’s sick. He’s not coming.”
“I still do not believe you.”
The over-paid, over-tipped waitress snapped her gum and continued to neatly arrange place-mats, forks, spoons and knives. She set a pint of Orange Juice, which she freshly squeezed, on the centerpiece of the table and folded cloth napkins into swans. Larry always remarked that she reminded him of the beauty and grace of a swan. Sometimes, it was the lone thing that brightened her day. Larry went out-of-his-way to ask about her out-of-wedlock children. He even gave them gifts for their birthdays.
“Mr. Silverstein will be in, I know it.”
The uptight concierge shook his head, “You’re wasting your time.”
“Sorry, but I know him. Only the devil himself could keep him from being here.”
“Fine, but when you’re done wait on tables with actual customers.”
The snot-nosed concierge returned to his post, checked in diners and escorted guests to tables. An undocumented alien, filling chef jobs Americans do not want, snuck around from the rear kitchen, tapped the waitress on her shoulder and whispered, “I agree with you. Mister Silverstein will be here.”
“I know.”
The waitress winked and smiled as she finished preparing the table and readied for her favorite part of the day.
A live video feed from the nose camera of Flight #11 turned on, multiple High Definition television screens inside the President’s bulletproof limousine lit up with images of the American Airlines Boeing 767 whipping through noisy winds, drawing the box-like skyline of New York City, closer and closer.
The operation, known among bacchanalian circles as ‘The Big Wedding’, kicked off with a bang...
Employees of Urban Moving Systems parked the white van in Liberty park, New Jersey, a perfect back-drop of the World Trade Center. They removed their Saudi Arabian style robes and carefully unwound dark turbans into the passenger seat.
“Grab the Nikon.”
Jason Schwartz snagged his camera by the strap, looked through the viewfinder and framed an artful shot of the steel twins.
“Tower One is on the right, focus on it first.”
“We’re going in numerical order then?”
He laughed as he zoomed in to the colossal exoskeletal structures, glimmering brightly in a cloudless blue sky.
“My turn, start filming.”
One of the other employees jumped before the camera and danced like a cracker at a hip hop club. They all laughed.
“I’m next.”
Another UMS worker mocked his partner’s dance then flicked a Bic ® lighter several times close to the camera and in the foreground of the Twin Towers.
Jason waved them away from the viewfinder, “Enough fooling around, it’s just about time.”
He checked his gold Rolex wristwatch, a gift from his Mossad handlers, and synchronized the clock, 8:46:26 a.m...
American Airlines Flight #11 roared over an innocent city at breakneck speeds and sliced on an angle through the silver North Tower between the 94th and 98th floors. New York trembled as Tower One enveloped the plane like a pesky horsefly caught and cocooned in a spider’s glistening web. 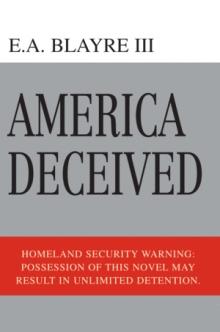 
Read the Free Preview of the infamous 9/11 chapter.

DISCLAIMER: IUniverse does not endorse, support, promote or condone any of the thoughts, ideas, or language presented in the novel “America Deceived II” by E.A. Blayre III.


READ AT YOUR OWN RISK

(Continued from the Free Preview section. Scroll down for information “About the Author”)


“Hit the plunger.”
General Barker pressed the red button.
Freight elevators, stationed near underground support columns, exploded. Trapped energy tore up through the basement levels, demolishing chunks of the main lobby area as prominent, thick marble tiling dislodged from walls and crashed to the floor, shattering into jagged pieces.
The earpiece transponder commanded, “Hold steady, the next plane incoming, e.t.a. 15 minutes.”
Back in New Jersey...
“Holy shit. Did you get that on film?”
“I did. It was better than I thought.”
UMS employees broke into another dance. An elderly lady, who history soon remembered as single-handedly solving 9/11, watched from her bedroom window while dialing the police.
Inside the adjacent tower, cubical office workers, security personnel, cleaning ladies, secretaries, maintenance men, janitors, assistants, and bellhops pried their faces away from the windows, lined up and started marching orderly down stairs, assisting the handicapped and lifting the feeble as they evacuated the South Tower.
The South Tower Public Address system blared several times and announced, “Do not evacuate. Fires in the North Tower are under control. Remain in the South Tower as there may be falling debris outside. Please return to your offices.”
People looked up at the anonymous voice emanating from dimpled metal boxes and kept walking. The trusting ones turned around and returned to their high rise offices.
One of the trusting ones, while walking back upstairs, thought about the evacuees, ‘Fools, hope a steel beam drops on your heads.’
The South Tower PA system blared and announced again, “Do not evacuate, return to your offices at once. This is for your own safety. Fires in the North Tower are under control. The South Tower is not in danger. Return to your offices at once.”
Just as the trusting one sat at his desk on the 80th floor, he glanced at the walnut clock his daughter gave him, 9:02:54 a.m...
United Airlines Flight 175 disappeared like a cartoon-cutout, swallowed whole by the South Tower, between the 78th and 84th floors. Enormous titanium airplane engines tore from their wings, sailed through offices, bathrooms, gyms, doors, hallways, safes, beams, walls, kitchens and crashed to the street, blocks away. Office paper birds flew out of the gaping hole and gently floated to the ground carrying names of the dead.
On the clearest day of the year, New York City clouded up.
Nestled snugly inside the Emma E. Booker Elementary schoolhouse in Sarasota Florida, the President of the United States kept reading the mesmerizing, magical book to the second grade class, “... ‘Yes,’ her dad said. ‘That goat saved my car.’...”
As per the script, Andy Card entered the room from stage left and delivered his lines.
“We are under attack.”
The President raised his eyebrows, turned the page and continued, “... ‘The car robber said, ‘something hit me when I was trying to steal that car’. The girl said, ‘My goat hit you’...”
CNN interrupted the President’s Book Club and broadcasted footage of Palestinians celebrating Saddam Hussein’s 1991 invasion of Kuwait with the headline, ‘Palestinians celebrate 9/11.’ Reuters and AP picked up the news and plastered it across the World.
Behind the hardened area of the Pentagon, a board meeting took place...
“Does everyone have their laptops? Open up the section regarding the Pentagon’s Budget. Use your installed hardware, internet’s down again.”
A century-old civilian accountant raised his hand and interrupted, “I was just over in D.O.D. and the internet’s running fine over there. Perhaps you should check it again.”
The Pentagon’s Budget Analyst tried to connect his computer.
“No dice, no signal. Without further interruptions, scroll down the page to a folder labeled Department of Defense spending, fiscal years 1999-2001. That is where we were told to search.”
“Search for what,” asked a lifelong bookkeeper who sat on a folding chair in the corner of the room.
“Missing money, a whole shit load of it.”
The medal-less Pentagon employees laughed. They asked all at once, “How much is a shit load?”
“2.3 trillion. Obviously none of you watched C-Span yesterday as I instructed.”
Civilian workers of Resource Services Washington sheepishly looked to the ground, a few laughed.
“I’ll fill you in. Secretary of Defense Donald Rumsfeld testified on Capital Hill yesterday and he talked about money missing from the Pentagon’s budget. Over two trillion dollars.”
“And…”
“And he called me yesterday. First time in my career, he called personally. He instructed me to schedule this early meeting and said that it is the task of everyone in this room to find it. Find the trillions. His exact words.”
A quota-hired receptionist creaked open the door and slid into a seat in the back row. The Senior Budget Analyst snapped, “You’re late.”
“Sorry, it’s just that as I was arriving, I heard on the radio that a plane hit the World Trade Center. Possibly even two planes.”
He grabbed a remote and pressed the power button, the wall-mounted television flickered.
“Tv’s out too. No Internet, busy phones and no television. This is a real first rate outfit we’re running here.”
He clicked off the television and said, “Let’s get back to business, Secretary Rumsfeld told me these trillions of dollars missing from the Pentagon budget are our number one priority.”
Deep below multiple levels of heavy metal blast doors, bolted inside the cold, steel White House bunker, the Vice-President slithered into his tall black leather chair, gnawing on Beef Jerky. He sat hunched, more like coiled, in a corner. Saliva pooled in his mouth. Scotch was the order of the day. Nobody does this sober.

DISCLAIMER: IUniverse does not endorse, support, promote or condone any of the thoughts, ideas, or language presented in the novel “America Deceived II” by E.A. Blayre III. Read at your own risk.


E.A. Blayre III, wrote his own death warrant on the eve of the Revolution.