Fifteen Principles That Liberated Mankind from the Politics of Tyranny

by David A. Norris 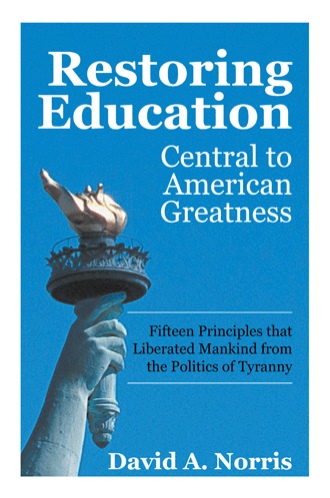 Publisher’s Note and Reviews from Professionals With Expertise on the Subject — This book was written for all Americans. David Norris describes, in a scholarly but understandable way, the role of governments limited by and for the peoples’ benefit. The timeless principles of political independence and responsible liberty that Americans celebrate every 4th of July are presented in Chapter One, and the American success story is detailed from there on. Some readers, such as law students, will want to begin by reading Appendix A, the Grand Jury Presentment on Problems in Higher Education. In that report David Norris established his credentials as an exceptional leader, analyst, and writer on the subjects of government, the dangers of militant secularism, and the importance of traditional American education. Norris has been given a wonderful gift of discernment and composition. He has done a marvelous job in organizing a huge amount of material. It is clearly presented and superbly relevant at this juncture in American life. The Name American Belongs to Liberty is undoubtedly one of the best books ever written on the subject. —James C. Magee, Ph.D. (Biology Science) and wife, Lois, M.ED., public school teacher for 30 years In this book, The Name America Belongs to Liberty, David Norris has again produced a significant piece of literature. Unimpeachably researched, he documents the impartial Biblical principles for civic community upon which the nation was built and then he exposes the betrayal of those sacred values by a small cadre of tenured radical educators. Mr. Norris’ background of experience has enabled him to identify the levers for local citizen control that must be restored. This book can be of great value to readers who are intent on restoring parental choice and reversing the harmful use of our schools by secular militants. I heartily recommend this book. —Ralph W. Hayes, Post Graduate Studies in the Humanities, Doctorate in Education. Retired Professor of Education at Clearwater College, Clearwater, Florida This book provides very valuable in-depth research showing that America’s liberty and freedom stem from the application of unchanging Biblical principles in the writing and application of the Declaration of Independence and the Constitution. The Norris book should be required reading in every college level Political Science class. —John Stormer, Pastor, Educator, Author, served as Chaplain for the Missouri state legislature for 31 years A truly complete case for the godly Biblical influences from which America's unique government and set of laws were patterned. David Norris brings the reader up to today's date on the history and status of the liberal educators and their philosophies which are detrimental to our liberties. The retreat from reality, deception, and invalid reasoning of post-modernists are exposed for what they are. Every God-honoring leader and Bible-believing church will benefit greatly by sharing the pro-American lexicon of this book. The well cataloged references range from the Founding Fathers to today's best conservative jurists whose writings are very useful for young people and adults alike. —Lowell D. Bond, M.D. Reports on the Grand Jury as Detailed in Appendix A “As one of the tens of thousands who admire the action of your Grand Jury, I wish to commend Foreman Norris and his jury for their courageous and true Americanism in focusing public attention on the perverted minority . . . who would destroy what we have . . . in America and deliver us unto our enemies” (E. Allen, Burlington, N.D., letter to the Nevada, Iowa Journal). “OUT IN IOWA . . . The jury’s report said ‘there is a need for increased emphasis at all levels of education of the American ideal. Our soldiers have been dying for this ideal. Education as never before should clearly teach it.’ So say we” (from the Boston Record, printed in the Ames Daily Tribune). Ames, Iowa-(AP)-The Grand Jury wants “moral pollution” . . . “and defamation of our country” (in the humanities curriculum) stopped (Denver Post).

This book documents the unique and specific American principles for government. The bedrock principles are presented in Chapter One.

John Adams, vice president under George Washington, and second president of the United States: “. . . And liberty cannot be preserved without a general knowledge among the people, who have a right, from the frame of their nature, to knowledge, as their great Creator, who does nothing in vain, . . . besides this, they have a right, an indisputable, unalienable . . . right to that most dreaded and envied kind of knowledge, I mean, of the characters and conduct of their rulers. Rulers are no more than attorneys, agents, and trustees for the people; and if the cause, the interest and trust, is . . . wantonly trifled away, the people have a right to revoke the authority . . .. And the preservation of the means of knowledge among the lowest ranks, is of more importance to the public than all the property of all the rich men in the country.”

The Tea Party Colonists were objecting to taxes required by the British Parliament because their representatives had not been allowed to participate in tax enforcement decisions. When shipments of tea were in the Boston harbor the crisis came to a head. They liked their tea, but in the early evening of December 16, 1776 about 200 men descended upon the ships and dumped the shipments of tea into the harbor waters.

Pre-publication reviews are in the front of the book—“. . . this is undoubtedly one of the best books ever written on the subject.”

DAVID A. NORRIS is the recipient of the 2004 Man of the Year Award from the Women for Constitutional Government. This book is a project of the non-profit Heartland Foundation, Inc., founded in February of 1981. The book promotes a nationwide push to restore administrator and teacher authority for upholding traditional American values. Mr. Norris was the chairman for the Grand Jury study on Problems in Higher Education for the 11th Judicial District of Iowa which dominated the national news briefly in 1969. The Grand Jury coined the term “moral pollution” when describing the agenda of radical professors. The Grand Jury Presentment is detailed in Appendix A.