Up from the Ashes

A Handbook for Healing 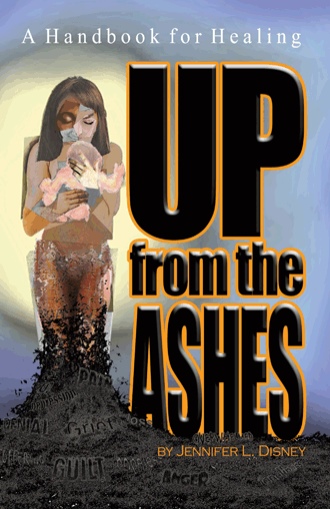 “It will ruin my future.”

“What will my family say?”

“What will people think of me?”

If you are like me, you feel shame every time someone talks about… abortion. I was worried that someone was going to discover my secret and I carried it with me for years before I could open up and share my story with other women. I convinced myself that the only way out was an abortion. It seemed so easy going into it, and our culture had normalized it so much so that this seemed to be the best path. I ignored my other options.

No one made a big deal out of it. So I must be doing the right thing. Once I told my doctor I was pregnant it seemed like this choice was the next step in the process. They knew exactly what to do and they knew exactly who to call. It was even a fairly inexpensive solution. It was a small price to pay for a huge mistake. My friends at the time seemed so supportive. They were telling me that I was making the right decision.

“It was just a medical procedure.”

“No one is going to find out.”

“No one should tell you what you should do with your own body.”

So I set the appointment and the day slowly approached. When the day finally arrived, I got ready in a robot-like manner and left for the clinic. Upon arriving at the clinic I was confused and angered by the crowd outside of the clinic asking me to change my decision. In a dazed manner I walked inside and the last attempt at changing my mind had vanished. There were no words spoken in the waiting room. I just silently waited to be called inside.

Once inside, they explain the procedure and I signed a bunch of papers and they got me ready. I am sure so much more happens, but those small details seem to escape me. I was escorted to another room to put my personal belongings inside a locker and I waited. There were other women in the room and it seemed so strained and quiet. One by one, we were called into the room and they prepared me for surgery. Then they put me under anesthesia and that was the last thing I remembered.

The next thing I knew I was being wheeled into another room. Next to me were women that were called before me. One by one, other women who had the same procedure were wheeled in after me. It was almost like a factory. The women all around me were so sad. Some were crying, some were like stones and some were trying to act cheerful. Regardless of how they were acting on the outside, if they were like me, it did not cover the fact that they felt empty on the inside. The staff tried to quickly get us ready to go home because their lunch time was drawing near. I got dressed and went home with the person that brought me. It was on the ride home I realized the pain of what I had done.

It was amazing how one incident could have an affect on how I viewed the world around me for the rest of my life. I was scarred so deeply and no matter how much I tried to put a bandage on my wound, what I really needed was some major surgery. There were so many unexplained emotions that would spring up when just the topic of abortion was brought up. I wanted to defend “my choice” but I did not have the nerve. I wanted to cry every time I saw a child that would be the age of my child. I wanted to reach out to women that were contemplating abortion, but who was I to tell them not to go through with it. I had given in to the pressure myself. I felt I was being punished when it took me over a year to get pregnant again. I constantly felt anxious and I could never really put my finger on the cause of this emotion. Anger, fear, depression, shame and so much more seemed to surface in my life at different times. When these feelings would come up I would not know why I was feeling this way. Someone would say something that would make me feel like I wanted to share, but I was too ashamed to share anything. I could never reveal my true self because of what I had done. There was always that deep, dark secret.

“Jennifer writes in a way that invites you on her journey of healing. With great depth and insight she encourages others to step onto the path of healing. The book will be a useful tool for those who want a deeper walk with the Lord.” —Linda Cochrane, author of Forgiven and Set Free

When twenty-something Jennifer Disney discovered she was pregnant, she didn’t feel overjoyed. Instead, guilt and shame nearly paralyzed her with fear. With a bright future ahead, she convinced herself that abortion was the only answer. On that fateful day, she made the decision to abort the baby, a choice that would forever change her life.

Up from the Ashes tells Jennifer’s remarkable true story of courage, faith, and healing from the devastating emotional and spiritual effects of her abortion. With refreshing candor, she shares her uphill battle of how she struggled to find relief from the constant emotional pain from her choice, and how this very struggle inspired her to reach out to others affected by post-abortion trauma.

Divided into easy-to-read sections with a uniquely Biblical perspective, this part-guide, part-memoir delves into the most difficult issues surrounding abortion and offers help and hope to women in need of both. Jennifer’s compassionate words accompany blank journal pages that encourage reflection and participation for sufferers, and create a safe, loving environment for recovery.

For those lost in post-abortion trauma, Up from the Ashes offers the promise of hope and healing, and reveals the true power of faith and forgiveness.

Born and raised in Corona, California, Jennifer L. Disney has a bachelor’s degree in chemistry and a master’s degree in education. She and her husband, Pastor Eric Disney, have two boys, Denzel and Derek. The couple is involved in post-abortion recovery ministry in their community.