24 Hours inside the President's Bunker 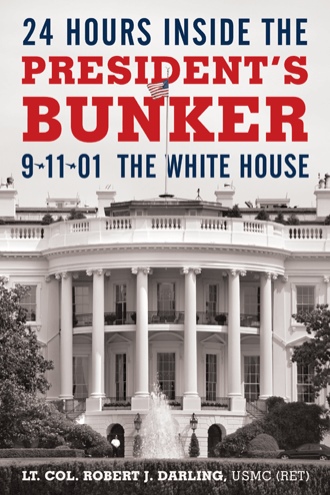 The Shoot-down Order of United Flight 93 9:52 a.m. The call came from the upstairs Situation Room, and the news was heart-stopping. Departing from the business-like and neutral language used in communications in and around the Executive Office, the staffer on the other end of the line, clearly agitated, just blurted it out, “We have a hijacked plane 16 miles south of Pittsburgh, inbound to Washington, D.C.” “Hold on,” I answered, attempting to sound as composed and calm as possible, as my military training kicked in to override the enormity of the news. As I turned to pass this information to the military aide, I was startled to see Vice President Dick Cheney along with Dr. Condoleezza Rice, the National Security Advisor, standing next to me. The Vice President’s wife, Lynn, his Chief of Staff, Scooter Libby, White House Deputy Chief of Staff, Josh Bolton, and Deputy National Security Advisor, Stephen Hadley, were taking up positions near and behind the Vice President. “Major, what have you got?” The Vice President asked. “Mr. Vice President, the Situation Room is reporting another hijacked airliner approximately 16 miles south of Pittsburgh, inbound for Washington, D.C.” I couldn’t help but notice how my corner of the room was filling up fast with White House staffers and other senior advisors. If he was taken aback by the report, the VP didn’t show it. The Vice President just turned away to speak into one of the numerous communications speaker boxes now chirping to life above the operations panel. These cutting-edge devices allow two-way, hands-free conversations between the PEOC and outside advisors from any number of federal agencies and the military. “Rick, are you there?” The Vice President asked. Rick is the federal aviation representative from the FAA's Air Traffic Control System Command Center or ATCSCC in Herndon, Virginia, some 30 miles from Washington. “Rick, can you confirm that we have another hijacked plane inbound, approximately 16 miles south of Pittsburgh, heading our way?” “Stand by Mr. Vice President, we’re checking.” Within seconds, Rick continued, “Mr. Vice President, they’re not talking, they’re not squawking their assigned transponder code, they’re well off course. We believe the aircraft is hijacked.” The Vice President then turned his attention to another speaker box in an attempt to get Secretary of Defense Donald Rumsfeld on the line. “Don, are you up?” “Mr. Vice President, this is the National Military Command Center, how can we help you, sir?” Without any hesitation, Cheney ordered, “We have a hijacked plane approximately 16 miles south of Pittsburgh inbound to Washington, D.C. I want two F-15’s out of Otis Air National Guard Base. Let me know when they’re airborne, and standby to shoot this plane down!”

After Maj. Robert J. Darling organizes President Bush’s trip to Florida on Sept. 10, 2001, he believes the next couple of days will be quiet. He has no idea that a war is about to begin. The next day, after terrorists crash airliners into the World Trade Center towers and the Pentagon, Maj. Darling rushes to the president’s underground chamber at the White House. There, he takes on the task of liaison between the vice president, national security advisor and the Pentagon. He works directly with the National Command Authority, and he’s in the room when Vice President Cheney orders two fighter jets to get airborne in order to shoot down United Flight 93. Throughout the attacks, Maj. Darling witnesses the unprecedented actions that leaders are taking to defend America. As Vice President Cheney, Secretary of State Condoleezza Rice, and others make decisions at a lightning pace with little or no deliberation, he’s there to lend his support. Follow Darling’s story as he becomes a Marine Corps aviator and rises through the ranks to play an incredible role in responding to a crisis that changed the world in 9-11-01: The White House: 24 Hours Inside the President’s Bunker.

Lt. Col. Robert J. Darling retired from the U.S. Marine Corps in September 2007 after more than twenty years of service. He has delivered numerous presentations, including as a guest lecturer on crisis leadership and counterterrorism at the FBI National Academy in Quantico, Virginia and Harvard University, John F. Kennedy School of Government. He is a vice president with Zenetex, LLC, a premier information technology and logistics support services company and lives in Stafford, Virginia with his wife and two sons.