Beer in the Bilges

Sailing Adventures in the South Pacific 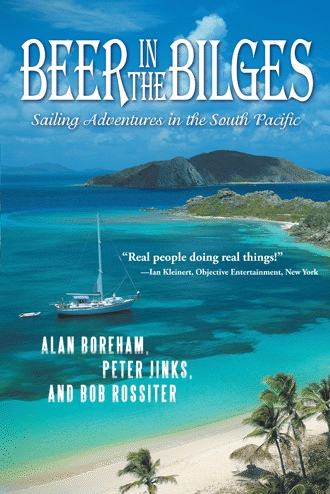 There was a point in time when there was a real possibility that this book would never be written. It was November 1982, and we were five days out of Pago Pago, en route to Honolulu, sailing a classic, fifty-five-foot gaff-rigged ketch named Ron of Argyll. She was built in Scotland in 1928 for one Colonel McKay, who was a frequent guest of King George V aboard the Royal Yacht Britannia. The colonel had reputedly hired the marine architect who produced that lovely yacht to design one for him. Her traditional hull, built of one-and-a-quarter-inch-thick teak planks copper-fastened to oak frames, had over the years furrowed the waters of the Atlantic, West Indies, and Pacific, hosting, it is said, such celebrities as Marilyn Monroe, and it had been sold to an Australian owner in the 1970s.

For we three sailors—“Hollywood” Bob Rossiter is a New Zealander who was then forty-one, Peter Jinks is from Australia and was thirty-two, and Alan Boreham is from Canada and was twenty-seven—this was a delivery job, a contract with the current Australian owner to bring the yacht to Hawaii and then on to Los Angeles for sale. We were all young at heart and living the dream of sailing a beautiful yacht through some of the most amazing cruising destinations in the world. It was an adventure, but one that was suddenly testing our resolve.

The winds had risen to gale force, and as the old girl punched into the growing seas, water was gushing in somewhere—we couldn’t tell where—and filling the bilges. With 1,800 miles to go, we took to the manual bilge pumps to try to dry her out so that we could find the source of the leaks. The search proved futile, and we worked just to stay afloat. With each of us following an exhausting, nonstop routine of an hour on the tiller, an hour on the pump, and an hour of sleep, after two days we were stumbling around like zombies. Bob swore that he had seen an empty beer bottle full of cockroaches washing around in the bilge, with the butt of the biggest one stuffed into the opening like a cork, making a cockroach lifeboat. That may have been the incentive we needed to turn around and try to make it the five hundred miles back to Samoa. Otherwise it was just three miles to land—straight down. As we were to find out later, it was a wise decision, as we unwittingly avoided an approaching hurricane that surely would have spelled the end of that lovely yacht—and us along with it.

In the early 1980s, after the sexual revolution and before the explosion of the electronic age, the remote islands of Polynesia begged to be explored. For three experienced sailors who dreamed of sailing through the idyllic South Pacific, it was a perfect time to embark on a quest through some of the most amazing cruising destinations in the world.

As New Zealander “Hollywood” Bob Rossiter, Australian Peter Jinks, and Canadian Alan Boreham set off from different points in the world—one in the company of a Hollywood star, one racing aboard a classic wooden yacht, and one on his first high seas adventure—none of them has any idea that a series of unanticipated events will eventually bring them together in the tropical swelter of Pago Pago. Along their journey lined with unexpected moments, the sailors meet a wide array of eclectic characters, including Sharkbite Charlie; Rosie, the three-hundred-pound dancer; and Gunter, the mysterious German chef from South America.

Beer in the Bilges offers a fascinating glimpse into sailing voyages to the other side of the world where three men join forces and have to rely on their skills, their wit, and, most importantly, on each other as they embark on an unforgettable nautical adventure.

New Zealander “Hollywood” Bob Rossiter has a history of life on the sea. From his home in Auckland, he made his way as a fisherman, sailor, and ferryboat captain. Bob spent time around the Polynesian islands, both as a fishing guide and a sailor, before moving to Marina del Rey, California, to work as a shipwright on yachts of the Hollywood set. There he met distinguished actor Hal Holbrook, leading to their voyage across the Pacific to New Zealand.

Bob had a marine services business in Hawaii for many years. From this base of operations he also worked as a delivery skipper, transporting yachts between Hawaii and California and from Hawaii to Vancouver, Alaska, and Japan. While in Hawaii, Bob studied acting and had parts in television commercials filmed there.

Bob retired from full-time marine work in 1995 and moved with his American wife to the Arkansas countryside where he still does some consulting work. They are making plans to retire for good to their property in New Zealand.

Peter Jinks left his home in the south of England at seventeen to immigrate to Australia. By the time he met Bob and Alan, he had spent almost half his life on the road. When he was short of cash, he started a window-cleaning business in Denmark, worked as a freelance photographer in South America, Russia, and Japan, and as a crocodile hunter in Costa Rica.

Back in Sydney, Peter went from selling end-of-line shoes for cash in the local flea market to a partnership in two top-grossing city shoe stores. Along the way, Peter was featured for a time as the Foster’s Man in Foster’s Lager television commercials and has done other acting parts.

Married in 1989, Peter and his wife have two daughters and have lived with them in the Cook Islands and Bolivia. An entrepreneur and still an ardent traveler, Peter and his family live at Bondi Beach in Sydney, where he owns a real estate consultancy, specializing as a buyer’s agent for top-end residential properties.

Alan Boreham emigrated from England to Canada with his family when he was two. He grew up on Vancouver Island off the west coast, spending a lot of time on the water with his father and friends. After completing a degree in civil engineering at UBC in Vancouver, he began his travels with a trip back to England. Following three years of work, he left for the voyages described in Beer in the Bilges.

Alan returned to Vancouver in 1983 to resume his career in fisheries and the environment, which ranged from building salmon hatcheries and managing programs for Aboriginal fishers, to participating as Canada’s national correspondent for the Canada-U.S.A. Pacific Salmon Treaty. He also served for ten years as a director of Cooper Boating, Canada’s largest sailing school and yacht-charter company, and volunteered with the Canadian Yachting Association to train sailing instructors.

Retired in 2010, Alan lives in North Vancouver where he does some consulting, and keeps busy as a writer and travel columnist for Canadian Teacher Magazine.