My Mother Said It; I No Longer Believe It 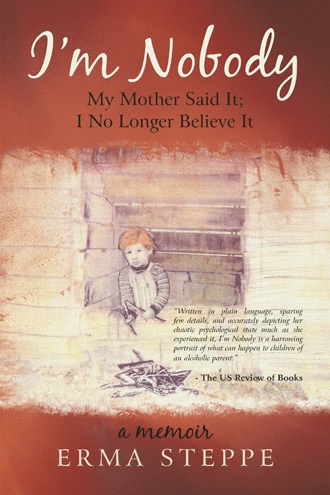 The statement that is etched in my mind was made to me by my mother when I was sixteen. She said "You are nobody; you don't count. the only ones I care about are me and this baby." I felt so little and afraid, for I had given up all my safe places to reunite with my mother. I had run away from the children's home, been released from state custody, and left everything familiar to me and I was facing someone who had rejected me continually. My dream of having her take me in her arms and say " I love you ' would never happen. At the age of sixty-four, I heard my mom say those words again, "You don't count;you are nobody. The only ones who count are me and my boy. Stay away from me." I finally have realized --she means it!

As sixteen-year-old Erma Steppe stood in a one-room apartment over a bar in Columbus, Ohio, her mother said to her, “You are nobody.” With no money, no clothes, and a rumbling stomach, Erma retreated into herself as her angry and intoxicated mother continued a familiar rant. Erma had always been her victim.<.p>

In her poignant autobiography, Erma Steppe shares her heartbreaking story of a life shaped by desperate attempts to hear the words “I love you” from her mother. Abandoned as a toddler, Erma’s quest for love would lead her through years of abuse, neglect, broken glass, blood, and black eyes— through an uncertain childhood spent in and out of children’s homes and foster homes. In her struggle to find her mother and reconcile her past, Erma embarks on an unforgettable journey through the darkness of abuse to reach a new life on the other side where she would eventually learn to heal, forgive, and most importantly, feel safe and loved.

I’m Nobody offers a brutally honest glimpse into what it is like to grow up without a mother’s love and how one woman reached from within and found the courage to survive despite facing insurmountable odds.

ERMA STEPPE was involved with social services and in foster care from age three until she married at age seventeen. She holds a degree from Morehead State University, is retired, and resides in Kentucky with her companion of over twenty years. I’m Nobody is her final goodbye to her mother.