Clashing Religious Doctrine and the Threat of Nuclear Terrorism 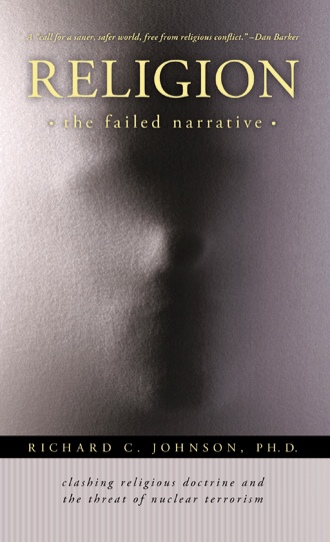 Science and religion are both grand narratives, worldviews that aim to explain our history, describle the nature of the world, and project our future. Religion tells its story through its prescribed holy texts, proclaiming that we are created by God, that he created the world, and we will spend eternity with God if we live moral lives. The religion narrative answers humanity's three persistent rhetorical questions: Who am I? Why am I here? What happens after my body physically dies? Science speaks through reason and investigation, creating theories that summarize its findings. The science narrative says that all life on Earth evolved to its present form over several billion years. All matter is derived from a set of physical principles delineated through scientific study. Conscious human beings evolved parallel with the rest of life on Earth. When our bodies die, we also die. The science narrative does not incorporate the supernatural. The religion narrative pushes strong directives about how we should conduct our lives. Science, on the other hand, provides evidence about how the world operates, and leaves personal conduct to the individual. Science does not provide moral guidelines; rather, how we treat others develops from previous beneficial social interactions. Religion cites rules for moral behavior that supposedly emanate from God. Science has found no evidence to prove there is a God. Which narrative, religion or science, should we believe? Is one better that the other? Followers of religion insist on rigid rules found in holy books they consider the word of God. But science sees no reason why these books have special significance; they were cherry-picked from writings by authors who lived several thousand years ago. They reflect ancient mores that condone slavery and the abuse of women. Religious codes of conduct derived from these so-called holy books are unsuitable for life in the modern world. Even revisions made by enlightened clergy lag behind secular standards that place a premium on civil rights. Moral guidelines result from arguments found in religious texts. But a recent Harvard University study found that nonbelievers are just as ethical in their behavior as believers, and they possess as strong a moral compass as churchgoers. Fairness, charity and compassion have always been revered in the public domain as secular traits, which we know are hard-wired in the brain. Does science provide meaning or purpose in life? Belief in God gives life meaning, according to religious followers. Similar to morality, having a purpose in life is held hostage by religion. Millions of nonbelievers have lived throughout history. Have all these folks lacked purpose? Perhaps nonbelievers have even a greater purpose because they have to make their own life decisions - without any God-fearing pressure. Consciousness does provide positive benefits. A sense of self allows us to experience life on our own terms. We make the moment, or fail to make it. Our lives are our responsibility and ours alone. Has religion satisfactorily portrayed human evolution? Scientific knowledge definitely does not gibe with religious doctrine, which states that God created the universe in six days. Religion tries to keep in the game by playing catch-up, treating biblical accounts as metaphors. On the other hand, many fundamentalist Christians maintain that biblical events are literally true. This archaic perspective puts religion out of touch with reality. What does religion say about the future? Religious leaders project that we will be knocking around in some afterlife with historical greats such as Julius Caesar and Queen Victoria. There is no way to discredit this prediction; this specious claim does not follow from observation but is still upheld by billions of people for self-protection. So, we created a hologram that represents God. When we die, consciousness fades - so does the hologram's brain buzz and the image of God. Science can secure our future. Humanity's future is embodied in our children and their children - if they are wise enough to tip the balance toward science. Even though science has fundamental limits because it's often difficult to separate consciousness from our experiments, we soldier on. But like riding on a bumpy road, a few ruts do not stop our quest. The future is bright because there is no limit to our search for knowledge. We are capable of making sensible decisions. We can't predict the future but we can help shape it. The conflict inherent in religion will always threaten the world's survival. Religion is a failed narrative that has compromised our history and messes up our future.

God emerges like a hologram in our consciousness and is falsely presented as the champion who will save us from death. Science, with its focused methodology, tells the true story.

God is the main character in religion, but he is a figment of the imagination. Humans experience consciousness like amnesia victims: We don’t know where we came from or why we are here, and we fantasize that we keep on living after our bodies physically die. Thus humanity turns to religion, a powerful source of consolation and comfort. Science, however, offers some more concrete answers.

Author Richard C. Johnson argues that God emerges as an adjunct of human consciousness, where he is conjured up in response to the isolation engendered by self-awareness. Huge conflict results, Johnson explains, because claims about God are made from doctrine rather than observation. The result of these conflicts has consistently been war. In an age of nuclear weapons and terrorism, religious conflict must be deconstructed by honest discussion. Johnson explores this seemingly impossible task and proposes methods by which it can be accomplished.

In Religion: The Failed Narrative, Johnson convinces us that irrational religion cannot guide us and that only rational science has proven to be a capable leader.

RICHARD C . JOHNSON earned a doctorate in chemistry and has spent four decades as a researcher and laboratory business owner. He was raised Protestant and converted to Catholicism in marriage. His religious and scientific backgrounds combine to give him a special vantage point to view our troubled world. Johnson resides in Tucson, Arizona.