Skirmishes, Battlefields, and Making Peace with My Father 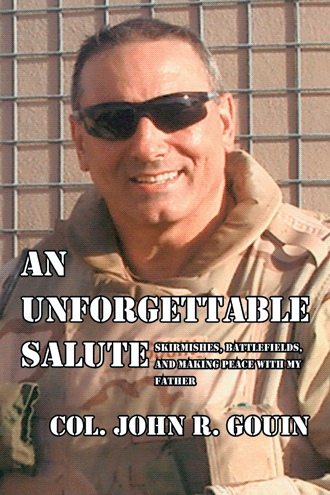 “Frank my ass!” he shouted, the boom in his voice echoing the violence that was about to flow from his huge painful fists. All hell was about to break out as Dad slowly pushed himself away from the table. He stood up and eyeballed me with an evil look as if possessed by demons. Slowly raising my head from my soup bowl, I timidly looked into Dad’s eyes and knew what to expect. However, my fearful eyes immediately filled with water as my heart rate increased and hands continued to tremble. I watched this immense wall of flesh and muscles reach for a pepper-shaker on the dining table. Of course, it wasn’t just any pepper-shaker; it had to be a ten-inch solid oak pepper-shaker that was last year’s Christmas gift from a relative. I knew what to expect at that very instant and did what any kid would have done. I attempted to make a life saving break from the table but there was no escaping the powerful grip of my father’s massive hand when he clamped down onto my left arm. Struggling to pull away and resist the forthcoming onslaught was a futile attempt at self-preservation. I peered over my left shoulder. I saw from the corner of my eye the downward stoke of the pepper-shaker. I frantically tried to protect myself with my other arm behind the back of my head. I immediately felt – and simultaneously heard – the crack of the pepper-shaker over my back and shoulders. My Dad somehow was smart enough to know not to leave any facial bruises or marks that would taint his image at the local bar and around the neighborhood. “Dad…stop! Please!” I begged and cried as I struggled to break free. The harder I tried to pull away from my father’s grasp, the harder I was beaten. My mother cried and pleaded with her husband to stop but he turned and looked at her with his anger-glazed eyes and refocused his assault on her. He now screamed at her and blamed her for their son’s insolent behavior. He then delivered a flurry of blows to her arms and back as she unsuccessfully attempted to protect herself. As Dad brutally attacked Mom, I realized an opportunity to make a recovery and attempt to make a covert escape to my room. I thought that if I made an escape from Dad's line of sight it would somehow defuse the situation with “Out of sight, Out of mind.” Making a quick getaway into my room was not so much a retreat but more of a flanking maneuver. By changing the war game, I figured it would make my Dad desert his attack on my mother and re-focus it elsewhere, anywhere away from us. My efforts to evade the beating was unsuccessful as Dad redirected his attention on me just as I was attempting to close the door to my very insecure but only refuge, my room. “Bam!” Dad blasted open the door with the force of his 230 pounds of body mass behind his broad shoulders and with a single swipe of his right arm slammed me against the wall. I was stunned from the force of the impact and crumpled to the floor. I was completely helpless, intensely afraid and slowly losing my will to defend myself. I mustered as much strength as possible after receiving such a horrible attack. I desperately tried crawling and scrambling on my hands and knees away from my father’s fury. Running for my life was the natural choice that a terrified boy understood. “Why are you crawling like a coward?” He bellowed, advancing on me like a bullfighter moving in for the kill. “You need to stand up and fight!” Even a heart pounding terrified boy was smart enough to realize that any attempt to fight back would only infuriate my father even more. Dad’s vicious rage would elevate exponentially and the resultant punishment even more brutal. He leaped on me and while sitting on top of me proceeded to deliver a multiplicity of punches to the back of my head, shoulders and arms. The punches that I painfully received were delivered by a man that was blinded with rage and uncontrollable temper. Most grown men would have difficulty fending off his powerful punches. I frantically tried to protect my head from each punch by thrashing my hands and arms as my mother again tried to repulse my Dad’s assault. He stood up, quickly turned and without losing step, he savagely turned his attack back towards Mom, punching her again and again and again. The gruesome sound of a man’s fist smacking against a woman’s flesh is a sound that I will never erase from the darkest corners of my memory. I could no longer stand by and watch my mother being mercilessly beaten, so I rallied my strength, mustered my courage and stumbled to my feet. In a frenzied daze, I jumped on my Dad’s back, wrapped my arms around his neck and screamed, “Leave her alone! … Stop it! … Just leave her alone!” Dad ripped my arms off from around his neck and effortlessly flipped me over his broad shoulders tossing me against the wall again, as if I was a weightless rag doll. The weakened and now spiritless body of this young boy slumped to the floor from his final valiant effort to stop his enraged father. I lay against the wall, turned my head and as he stood over me, I looked directly into his eyes and conveyed the words, “Are you proud of yourself now?” I slowly closed my eyes, turned my head away from my father and prepared to expect another volley of punches on my exhausted and defenseless body.

It all seemed so picture-perfect. It was a typical fall evening in Woonsocket, Rhode Island, in 1965 when John Gouin, a twelve-year-old boy with big dreams came home from football practice and sat down at the dinner table with his mother. But when the front door slammed loudly shut, John and his mother anticipated the worst. His father was a man lost within his own anger. In his compelling memoir, An Unforgettable Salute, Gouin chronicles his lifelong battle to please his alcoholic father, his attempts to stop the physical abuse, and his journey to psychological and spiritual healing that eventually culminated in a heartwarming final exchange with his gravely ill father. After describing a childhood during which he was physically beaten and emotionally scarred, Gouin details his dream of playing in the NFL, which lasted until a devastating injury ended his football career. After struggling to find his calling, Gouin eventually joined the army, where he had a life changing experience with God paving the road for him to leave a life of violence. The military taught him self-discipline and the necessary leadership skills that later guided him to achieve professional success as a podiatric surgeon, a Colonel in the U.S. Army Reserves and a husband and father. An Unforgettable Salute is the true story of one man who rose from the silent side of abuse to achieve healing, happiness, success, and most of all, peace.

John Gouin earned his undergraduate degree from the University of Rhode Island and his Doctor of Podiatric Medicine from Scholl College. He served in the United States Army for thirty-three years and continues his service as a Colonel in the Army Reserves. He resides and practices medicine in Corpus Christi, Texas.