Carl Stearns Clancy: First Motorcyclist To Ride Around The World 1912-1913 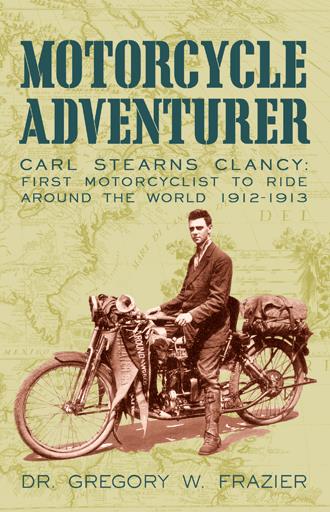 “The longest, most difficult, and most perilous motorcycle journey ever attempted.” The Bicycling World and Motorcycle Review “Anyone who desires to diverge from the beaten path and visit points that may be of peculiar interest to him personally, the motorcycle is undoubted the only satisfactory means of travel.” Syracuse Herald “One must die sometime and to die with one’s boots on is very noble.” Carl Stearns Clancy while riding his motorcycle at night in Spain, 1913. This travelogue originally authored by Clancy is for the avid motorcycle adventurist, the travel dreamer thirsting for motorcycle touring. Clancy circled the globe during 1912-1913 on a 1912 motorcycle. There were no GPSs, ATMs, Internet, and often no gas, roads or motorcycle repair shops. It describes the first motorcycle global adventure ride by the man who survived a dream quest with his gun, determination, grit, and guts. Edited by author Dr. Gregory W. Frazier, “America’s #1 extreme motorcycle adventurer,” who has raced, ridden, and repaired motorcycles over 1,000,000 miles and five times around the world. Best-selling author, journalist, film producer and professional photographer, Frazier’s works include 14 books and 10 films. He says of motorcycle adventures, “I hate adventure that involves snakes or sharks.”

Dr. Frazier, author, journalist and film producer, has been riding and writing about motorcycle adventures for over 25 years and 1,000,000 miles. He has written 14 books, numerous magazine articles and produced 10 films. America’s “#1 extreme motorcycle adventurer,” Frazier has piloted motorcycles to the geographical ends of the earth.