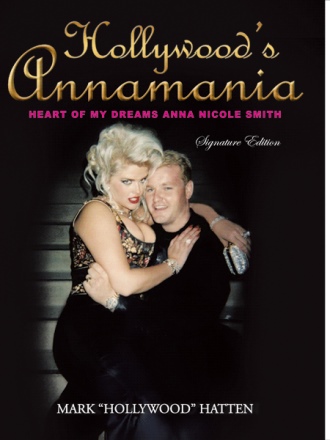 Hollywood’s Annamania Anna-mated Reality- For nearly ten years now, I have been drawing Anna Nicole with this project in mind, and therefore, there is a method to my madness. Without further ado, I give you, Annamania! Welcome to my world, I hope you enjoy it and like what you see. I wonder if the day will come when I will never draw another picture of the queen, but never say never, Annamania is a living, breathing, part of me, fantasy meets reality head on!

Anna Nicole the Goddess in full bloom, right before thine very own eyes… She looked at me as if she had just hopped out of the pages of Playboy and said “I wanna have a baby girl with you Mark, how’s about we get started tonight huh?”

Fairytale romance, Night of 100 Stars, a giant gala event…Anna Nicole, Jackie, Howard & Me…A big long limousine headed to the Beverly Hills hotel for the ultimate Oscars ceremony!!! Paparazzi, freeze-frame & red carpet hot as Anna Nicole as she sizzled on the scene. She was the “Belle of the ball” to everyone she met!!! Anna Nicole sat in my lap and whispered into my ear... “I love you Mark sooooo much, you’re the heart of my dreams!”

The pink feathers, lipstick kisses, and Sugar Pie in the bedroom. In reality, this was the first reality Anna Nicole Show. All we needed was a major television network on the scene! Later, I was shocked to see from behind bars, her lawyer (HKS) taking my place on the Anna Nicole Show on E!

One warm summer morning, Anna said to me, “I love these drawings, let’s get matching tattoos! I’ll pay for it!” She insisted I get the Anna Nicole “Hell’s Angel” with Harley Wings blasted across my back. She said she wanted the Anna Angel to be an Anna Mermaid, sitting on red lips above the crack of her ass: An original Hollywood’s Annamania “Tramp Stamp”, with her squeal of approval!

I was incarcerated at Pleasant Valley State Prison, "nothing pleasant about it," when I heard the news that Anna Nicole was pregnant, and she was not revealing who the baby’s father was. I knew for sure it was not Howard K Stern, and I remembered her always promising and begging to have a baby girl with me. How sad indeed that she had miscarriages on two separate occasions! Anna insisted to privately collect a "sperm sample" from me for future use. I must admit, I was convinced when I heard she told a reporter from Stepping Out magazine that "artificial insemination was a strong consideration." If that be the case, I knew without a doubt the unborn baby was mine.

However, I’ve known Howard K Stern as far back as early 2000. As far as I’m aware, I’ve never known him to be sexually active with any female on this planet! In my opinion Howard just might have a little bit too much sugar in his gas tank!!! As a matter of fact, I find it easier to believe that Larry and Howard were lovers before I could even begin to believe that Anna Nicole was ever Howard’s lover. To me, it sounds absurd, even hilarious, as she told me on numerous occasions that Howard would be the last person on Earth she would ever have sex with, because he, and I quote, “Ewwwwww! He just grosses me out!” Yet, it’s a mad, mad, mad world, and people change every day.

Nearly ten years later in 2009, after the FBI approached us for the first time, Anna Nicole’s FBI file was publicly released for the very first time. My name appeared numerous times throughout the file, which prompted Anna Nicole and I to make headline news together once again… I was shocked, yet not so surprised, to say the least.

A Harmonious Tribute to Anna Nicole- I wrote my very first Anna Nicole song in her bedroom at her Hartsook house (with her help I must say!). Here I would like to share with you, some of these songs from the heart which I hope you enjoy as much as Anna did when I sang some of them for her.

Hollywood’s Annamania Models- In cosmic and unbelievable ways, these ladies were chosen because they all seem to have contracted Annamania. With the thousands of MySpacers around the world, many of which also have Annamania, it would be impossible to feature every person I diagnose in having this disease. Here are five excellent examples of full-blown Annamania. I hope you enjoy their tribute to the goddess, and decide for yourself who you presume, if any of them just might be "the Next Anna Nicole Smith?"

Artist/Entertainer Mark “Hollywood” Hatten was secretly married to Ms. Anna Nicole Smith in numerous private wedding ceremonies, complete with full wedding garb, the exchange of rings and sacred wedding vows, sealed with a kiss. These dreamlike weddings were always followed by the most breath taking ,baby talking ,sensationally romantic honeymoons as we made passionate love for days and days on end!

“Hollywood’s Annamania, It’s Insania , It Racks My Brainia!” This authentic “Colorable Annamated Artbook” is filled with intimate memorable moments, rare photographs, our deepest secrets, songs & poems, anecdotes, and handwritten love notes from Ms. Anna Nicole Smith & Hollywood Hatten!!!!! Mark is the brother of Ms. Jackie Hatten, a long time best friend of Ms. Anna Nicole and godmother to her son, Daniel. As a child, Mark was an artist that loved to draw... some years later ,Ms. Anna Nicole simply adored the portraits he would draw for her... she loved his artwork so much, that she insisted they get matching tattoos! Mark has done thousands of Anna Nicole Smith artworks and related projects as some people say its his “Secret Obsession”... yet i say ,”It’s a tribute to the Queen,” which pulls the curtain back a little further and shows just how deep the “Playboy Bunny” hole goes!

Sweet Anna Nicole Smith is the greatest inspiration to me as an artist that I have ever known, and I memorialize her as the ultimate iconic beauty queen, as a wonderful loving caring mother, and “Heart of my dreams!” I share with her fans this artistic tribute in her honor! This photographic and artistic memoir tells the story of our lives together and chronicles the life of Ms. Anna Nicole Smith with all of it’s unbelievable twists, turns and tragedies... It’s “Shakespearian Rhapsody” at its best!

Mark Hollywood Hatten is the founder/president/CEO of HOLLYWORLD ENTERTAINMENT ENTERPRISES LLC and proud father of his two sons Christian & William. He now lives in a haunted house over 100 years old near Myrtle Beach, South Carolina with his girlfriend Ms. Candy Hart , their pets Petey Love, Mallomar, Vivi, & Witchy Witch, and they all continue to embrace “Annamania” on a daily basis.