Climates of the Mind

A Bipolar Memory Including the Therapy Journals 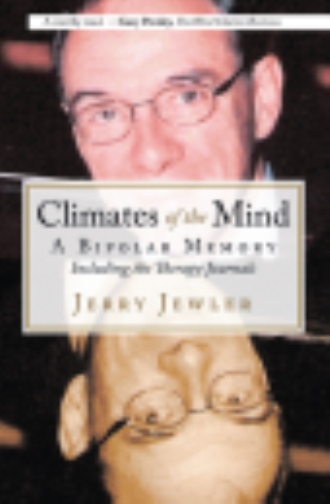 One man’s story of his journey through life and how it was directed by an unknown force.

When Jerry Jewler turned sixty, he had established himself as a popular professor of mass communications. With a desire to celebrate his birthday with a festive party, he and his wife hosted a lollapalooza of an evening. But the next morning, he awakened to a hell he had never known before. Jerry was just beginning his journey into the mysterious world of bipolar disorder.

In his emotional and powerful narrative set throughout his lifetime, Jerry illustrates how this often misunderstood illness affected his life from an early age. He shares how he explored his past, seeking clues to help him understand the intense highs and melancholy lows he had experienced since childhood and researched his family history to determine the roots of the disorder. While sharing a deeply personal story, Jerry also offers information on the multiple factors that contribute to bipolar disorder, the details from therapist sessions, and the emotions he felt as he journeyed to self-acceptance.

With candor and a remarkable memory for even the earliest details of his life, Jerry recounts his tale with the hope that others might better understand that a mental disorder, with proper treatment, is not shameful or a sentence to a dismal life.

Born in Washington, D.C., Jerry Jewler taught mass communication studies at the University of South Carolina for twenty-eight years prior to his retirement in 2000. He has lived in Columbia, South Carolina, with his wife, Belle, since 1972. Together, they have two children and two grandchildren.