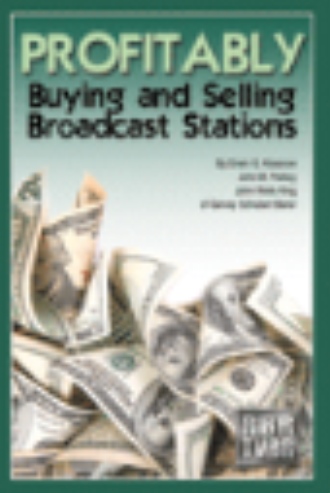 The only book of its kind, Profitably Buying and Selling Broadcast Stations, provides never published-before information on the business, technical and legal aspects of investing in and acquiring broadcast stations.

If you are interested in buying, selling or investing in a broadcast station, this book is for you. Written in plain English by three prominent communications lawyers, it is designed to decode the mysteries of broadcast station purchase and sale contracts and present the most innovative contract strategies in today’s marketplace.

Profitably Buying and Selling Broadcast Stations guides you step-by-step over that long, often rocky, road from the initial letter of intent to the closing, helping you to avoid the potholes and pitfalls in between. By using the advice contained in this, you will be able to prevent costly mistakes and sleepless nights by avoiding problems that could surface due to inadequate due diligence or incomplete document preparation.

ERWIN G. KRASNOW has been described as “a dean of the Washington communications bar” by Legal Times, as a “super lawyer of communications” by American Film magazine, as “the guru of communications law” by the Broadcast Cable Financial Journal, and as a “Super Lawyer” in the 2007, 2008 and 2009 editions of Washington, D.C. Super Lawyers magazine. He served as Senior Vice President and General Counsel of the National Association of Broadcasters. JOHN M. PELKEY -During his nearly 30 years of practice before the FCC, John Pelkey has represented broadcasters in virtually all types of proceedings within the FCC's jurisdiction, including hearings, transactions, rulemakings, and applications. During that time, he has represented sellers or buyers in numerous broadcast transactions involving hundreds of broadcast stations, including sales of individual stations, sales of stations emerging from insolvency, and transactions involving entire station groups with station clusters in multiple markets. Ever since his tennage years when he would fabricate antennas froom broom handles and aluminum wire for operation on the then exotic 11 MHz band. JOHN WELLS KING - John King's experience in the field of broadcasting began on the "live" side of the microphone, as a precinct reporter for NBC News during the 1968 presidential election. Mr. King counsels clients in traditional broadcast matters, in new technologies, and in related areas such as trademark, copyright, licensing, and associated intellectual property issues. He also concentrates on transactional matters for radio and television stations, cable operators, internet service providers, and related entities. An accomplished campanologist, Mr. King is a past President of the North American Guild of Change Ringers, and former Ringing Master of the Washington Ringing Society, which performs on the bells of Washington National Cathedral. He is a member of the Ancient Society of College Youths, the oldest British bell ringing society.