They Called Me Uncivilized

The Memoir of an Everyday Lakota Man from Wounded Knee

by Walter Littlemoon with Jane Ridgway 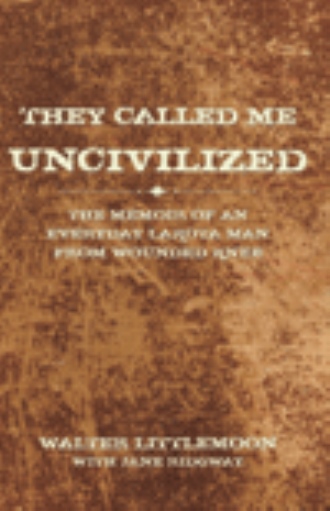 Walter Littlemoon’s memoir, They Called Me Uncivilized, is a call to awareness from within the heart of Wounded Knee. In telling his story, Littlemoon describes the impact federal Indian policies have had on his life and on the history of his family. He gives a rare view into the cruelty inflicted on generations of Native American children through the implementation of U.S. government boarding schools, which resulted in a muted truth, called Soul Wound by some. In addition, and for the first time, his narrative provides a resident’s view of the 1973 militant Occupation of Wounded Knee and the lasting impact that takeover has had on his community. His path toward a sense of peace and contentment is one he hopes others will follow. Remembering and telling the truth about traumatic events are prerequisites for healing.

Many books have been written by scholars describing one aspect or another of Native American life, their history, their spirituality, the 1973 occupation, and a few have tried to describe the boarding schools. None have connected the dots. Until the language of the everyday man is used, scholarly words will shut out the people they describe and the pathology created by federal Indian policy will continue.

Walter Littlemoon, born in 1942, was raised in Wounded Knee on the Pine Ridge Indian Reservation in South Dakota. His father was a full blood Lakota, and his mother, a Northern Cheyenne. For nearly thirty years he sought a means to help his community overcome the group confusion and depression that federal policies created.