In the Tank—A Bound Blog

by Mark A. Anderson 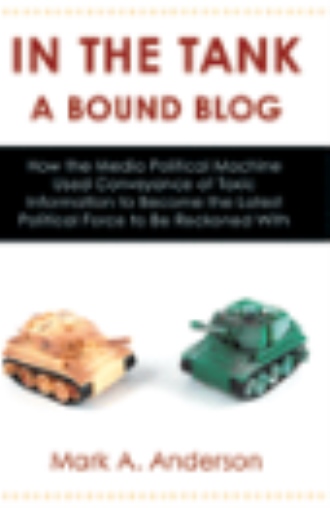 In recent times, the integrity of the news media, in various forms, has been compromised by the corrupting influences of network owners, major sponsoring interests, and off center leaning journalists and correspondents who seem more interested in influencing viewers’ thoughts than maintaining the dignity of their craft. Although it is not clear when the practice of self interest driven bias entered the equation of day to day news reporting, when it first became noticeable to most is when the FOX News network commandeered the reins of news mass media and began reporting all things newsworthy with a right leaning spin while in the same breath referring to itself as both “fair and balanced.” In turn, the popularity of intellectually stimulating news programs such as “60 Minutes,” “20/20,” and “Meet the Press,” began to dwindle in favor of Ringling Brothers, Barnum and Bailey styled news reporting that was far more entertaining, opinionated, and negative in nature. When I was much younger, I remember being confused by this manner of reporting, and watching my father angrily change the television channel to another news station—any news station other than FOX. As an adult, I too became angered when I finally realized that the manner of news reporting employed by FOX was nothing more than an effort to rob me of my opinions, independent thoughts, and, most recently, my vote, by whomever controlled the media outlet from which I obtained tainted newsworthy information. To put it simply, one would not purchase goods from a store if the contents had been tampered with or had the safety seals broken on them, because this is an indication that the goods could be defective and prove to be harmful to the consumer. More importantly, the absence of any form of seal on the product is an indication that the guarantee of freshness and safety from the manufacturer is null and void. I began to wonder why I should accept any less of a guarantee from a news media outlet that served as the conduit between myself and the origin of a given news story. Instead of acting as an honest broker, much as my local discount retailer, by passing the goods on to the consumer in the same sealed manner it was received from the manufacturer, now the mainstream news media was, instead, breaking the seals on the goods, adding toxic ingredients of their choosing to the contents, then passing it on to the consumer in the form of program viewers.

In 2008, while America witnessed one of our nation’s most exciting general elections, the American news media was launching its own political campaign—one that injected spin and bias, in its most toxic form, into the delivery of almost every story related to the presidential elections. Mark Anderson has spent fifteen years serving his country in the United States Armed Forces and shares his blog entries that chronologically document the sometimes blatant tactics employed by the news media during the primary and general elections. Through his personal observations, Anderson contemplates whether the outcome of the election was solely the will of the people or in part a result of the toxic reporting methods employed by the news media. Anderson also examines how the news media systematically ostracized Senator Hillary Clinton when Senator Barack Obama reached “rock star status” during the national elections, how the focus on John McCain’s health and age played a part in his general elections loss, and how American news media entities successfully reversed the public’s infatuation with then Governor Sarah Palin. In the Tank—A Bound Blog offers a thoughtful scrutiny of the American news media industry as a whole during a monumental time in America’s history and encourages lively discussions on how much political power it now possesses.

Mark Anderson has spent 15 years in the United States Armed Forces in service to country. He is a commissioned officer with both a Bachelors and Masters Degree in history and political science respectively. He served as an Operations Officer in support of Operation Iraqi Freedom from 2005 to 2006 earning him both the Bronze Star Service Medal and the Joint Service Commendation Medal. Recently promoted to the rank of Major, Mark continues to serve this nation faithfully. He enjoys reading, and writing. He is a native of Arkansas and currently resides in central Oklahoma.