Achieving Peace in the Abortion War 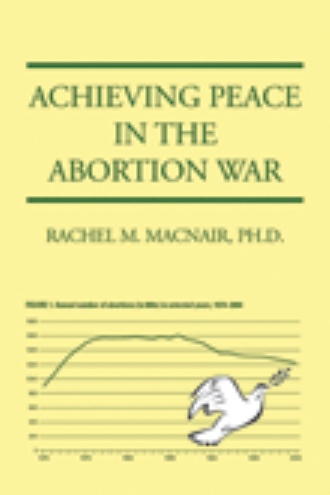 Elections come and go, and outcomes depend on events and characters out of the control of any single movement. The United States’ downward trend in abortions, however, has happened steadily through both Democrat and Republican administrations. There are several reasons to believe this is likely to continue.
The fragility of abortion practice in the United States is becoming increasingly clear. (People in other countries may also find useful information in the principles explained here). The real-life experience of doctors and nurses involved in providing abortion show that they are a weakening link in the abortion chain, and this book explains reasons why this is so that depend more on psychology than politics.
There is also a vital opportunity in understanding the human mind’s drive for consistency and its link to behavior. When knowing about how abortion practice has begun collapsing, people find it safer to hear the case against it, and to act in a more constructive way toward the genuine needs of pregnant women.
The social and psychological dynamics of performing and defending abortions offer many opportunities for stopping widespread feticide. The more we understand these, the more effective we can be as peacemakers in the abortion war.

Rachel M. MacNair, with a Ph.D. in social psychology, is a long-time activist and scholar in both the pro-life movement and the peace movement. She served as president of Feminists for Life (1984-1994) and is currently Director of the research arm of Consistent Life: An International Network for Peace & Life. Other books include co-editing ProLife Feminism: Yesterday and Today and Consistently Opposing Killing: From Abortion to Assisted Suicide, the Death Penalty, and War, and authoring The Psychology of Peace: An Introduction, Perpetration-Induced Traumatic Stress: The Psychological Consequences of Killing, and orking for Peace: A Handbook of Practical Psychology. Such books not being lucrative, she also provides statistics consulting to desperate dissertation students. She is a Quaker and lives in Kansas City, Missouri.