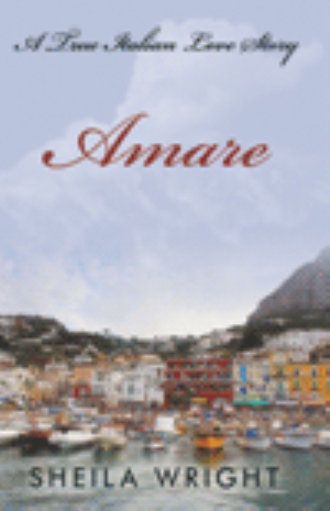 Award-winning author Sheila Wright weaves a sensuous tale of love and longing in southern Italy. Insightful, humorous, warm and confiding, Amare evokes a true portrait of life in a land both breathtaking and heartbreaking. “Sheila Wright takes us beyond the tourist trails and describes in detail the natural beauty and chaos of Italy. Wright passionately illustrates that 'Amare'— to love— means accepting the good as well as the not so perfect.” —Licia Canton, Author of Almond Wine and Fertility and editor-in-chief of Accenti Magazine “Amare is lyrical, articulate, suspenseful, and intimate. Emotions running deep through the narrative cast a spell over the reader. Wright's gentle humor balances with moments of serious doubt, fear, and longing. Her love of the land breathes through the prose.” —Patricia Calder, Author in Changing Ways When Sheila Wright travels to Sorrento, Italy, on a whim, she knows from the moment she arrives that she has found an extraordinary place. With a certainty even she doesn’t understand at first, Sheila throws herself wholeheartedly into an enchanting yet chaotic country. Amare is a magical memoir of an odyssey that began as a trip around the world and transformed into an unforgettable journey into the heart and soul of southern Italy. In lyrical, often humorous prose, Wright describes the adventure of living the life of a foreigner in Sorrento. From hunting wild mushrooms to learning a new language, she shares moments full of promise and discovery. When Italian authorities throw her out of the country, she returns, undaunted and determined to make Italy her own. A glorious romance ensues, not only with a tall, dark, and handsome Italian, but with the land itself. Join Wright on a fabulous adventure as she snorkels along the Amalfi coast, camps on the island of Sardinia, devours pizza in Naples, and to her surprise, falls madly and passionately, in love.

Sheila Wright won the 2006 Accenti Magazine award for “The Nature of Italy”, an adapted excerpt from Amare. Her story also appeared in Travelers’ Tales: 30 Days in Italy. Sheila lives in Ontario, Canada, with her husband and two sons where she teaches French and English and facilitates a writers’ group.